A bench of Justices DY Chandrachud, Surya Kant and PS Narasimha adjourned the case before it till Friday at 3 pm after the Hindu side's lawyer asked it to hear the case tomorrow. It then asked the trial court in Varanasi to desist from taking up the matter today. 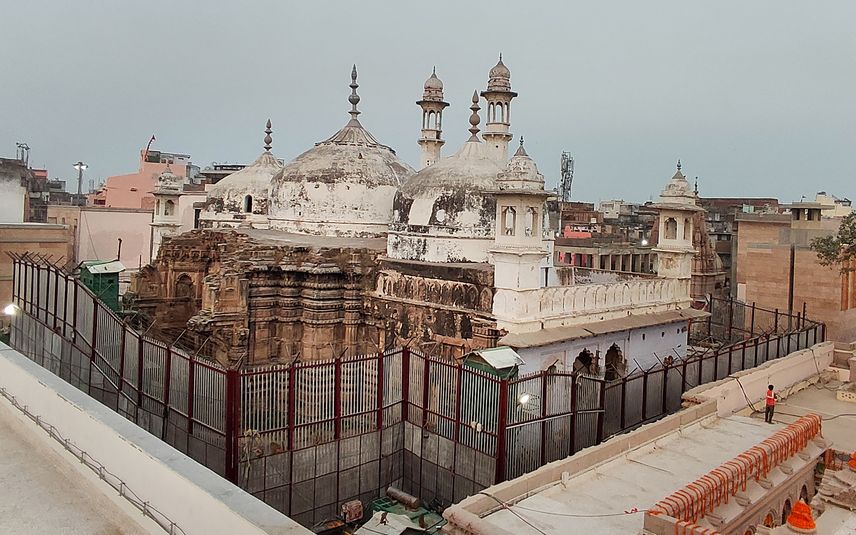 New Delhi: The Supreme Court on Thursday directed the civil court in Varanasi civil court to not proceed with the case related to the Gyanvapi mosque case till it takes up the case on May 20.

A bench of Justices DY Chandrachud, Surya Kant and PS Narasimha adjourned the case before it till Friday at 3 pm after the Hindu side's lawyer asked it to hear the case tomorrow. It then asked the trial court in Varanasi to desist from taking up the matter today.

Advocate Vishnu Shankar Jain, appearing for Hindu petitioners before the trial court, sought adjournment for the day on account of the medical condition of leading counsel Hari Shankar Jain.

Senior advocate Hazefa Ahmadi, appearing for Anjuman Intezamia Masajid objected to the adjournment saying today trial court is hearing today applications seeking to alter the wall of the Wazukhana of the Gyanvapi mosque.

To this, Justice Chandrachud told advocate Jain, "We will keep it tomorrow but don't proceed before the trial court today since they have apprehension."

Jain recorded his undertaking that the matter won't be pressed before the Varanasi court today.

"We accordingly direct the trial court to strictly act according to the arrangement as here and it should desist from passing any orders", the bench stated in the order.

The case of the Committee challenging the Varanasi district court order which directed a video graphics survey of the Gyanvapi Mosque complex, which is adjacent to the Kashi Vishwanath Temple in Varanasi, was listed today before the top court.

On Tuesday the apex court directed the concerned District Magistrate in Varanasi to ensure that the Shivling recovered from the Gyanvapi Mosque complex during a survey by the court commissioner be protected.

It had ordered that direction to protect the area where Shivling is found shall not in any manner restrain or impede access of Muslims to the mosque or use of it for performing prayers and religious observances.

The apex court had lifted the prohibition imposed by a Varanasi district court on Muslims from entering Gyanvapi Mosque. The trial court had permitted only 20 people to pray inside the premises.

The apex court had also issued notice to the Hindu petitioners, the Uttar Pradesh government, and others on the plea of the Masjid Committee.

The Court, however, had declined to stay proceedings before the district court as requested by the Muslim side.

Solicitor General Tushar Mehta appearing for the State of Uttar Pradesh had objected to lifting the restriction on entry of Muslims in the area saying the government's concern is that if the area where the Shivling is found is touched by feet then it will lead to deterioration of law and order situation.

On Monday, a Varanasi district court directed the sealing of a spot in the complex after being told that a Shivaling was found inside the Gyanvapi mosque premises by the court-appointed advocate Commissioner during the survey.

The appeal was filed by the Committee that manages the Gyanvapi mosque challenging an order of the Allahabad High Court permitting a court-appointed commissioner to inspect and conduct a survey and videography of the Gyanvapi mosque to which Hindus and Muslims have laid claim for the right to worship.

It had sought direction for a stay on the survey of the Gyanvapi Mosque complex.

A Varanasi civil court had directed a survey to inspect, conduct videography and collect evidence regarding the alleged existence of Hindu deities inside the Gyanvapi mosque located next to the Kashi Vishwanath Temple.

On May 12 the court said that the survey of the Gyanvapi mosque will continue despite objections from mosque authorities.

The local court had earlier directed the authorities to submit a report by May 10, however, the survey could not take place as the mosque committee had opposed the videography inside the mosque.

The civil court had appointed a court commissioner to conduct a survey and videography of the site and the same was challenged before Allahabad High Court which dismissed the appeal on April 21. Now April 21 order of the High Court has been challenged in the apex court.

Five women had filed a petition in the court seeking permission for daily worship at the Shringar Gauri temple, which was allegedly situated inside the Kashi Vishwanath-Gyanvapi Mosque premises.

The order of the civil court for undertaking survey and videography at the premises came on their petition.

Another petition was filed by one Vijay Shankar Rastogi, who had contended that the entire premises belonged to the Kashi Vishwanath and that the Gyanvapi Mosque was only a part of the Temple, had also been pending in the court since 1991.

Rastogi had claimed that the Kashi Vishwanath Temple had been built over two thousand years ago and the temple had been demolished by Mughal emperor Aurangzeb. (ANI)