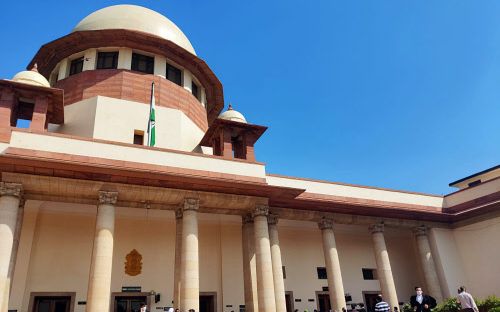 New Delhi: The Supreme Court Monday commenced hearing on the pleas of rebel Shiv Sena MLAs, led by minister Eknath Shinde, against the disqualification notice issued by the deputy speaker to them and asked why they did not move the Bombay High Court in the matter.

A vacation bench of Justices Surya Kant and J B Pardiwala was told by senior advocate N K Kaul, who appeared for the rebel MLAs, that the Uddhav Thackeray group is in the “minority” of the legislative party and has been “subverting the state machinery”.

Kaul said that atmosphere is not conducive for these MLAs in Bombay as they have been threatened.

He cited the apex court verdict in the Nabam Rebia case of Arunachal Pradesh and said the deputy speaker is not competent to proceed with the disqualification of MLAs when a plea for his own removal is pending.

Kaul said 39 MLAs are together against the minority group.

Maharashtra Shiv Sena MLA and minister Eknath Shinde have moved the apex court against the disqualification notice issued by the deputy speaker to him and 15 other rebel legislators, calling the action "illegal and unconstitutional" and seeking a stay on it.

Shinde and a sizable number of MLAs rebelled against the leadership of Chief Minister Uddhav Thackeray on June 21 and are currently in Guwahati in Assam.

Consider introduction of 'Bail Act' to streamline grant of bail: SC to ...