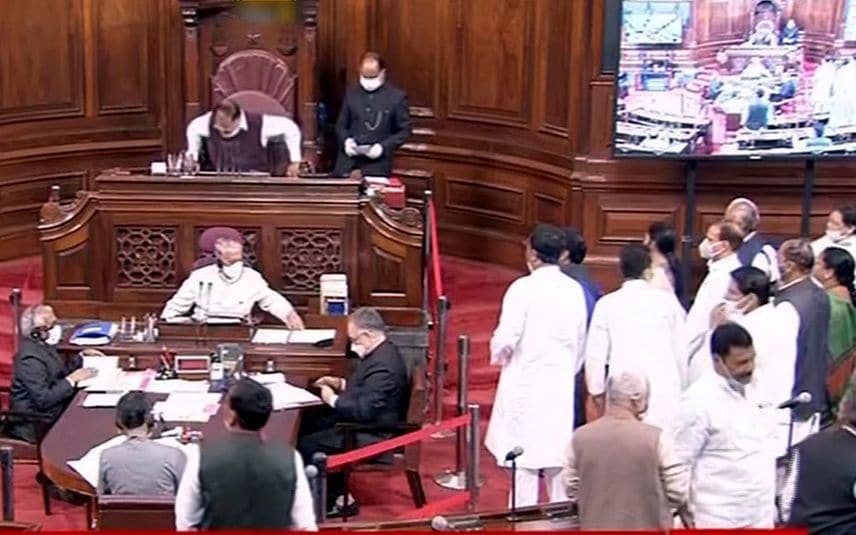 Opposition leaders stage a protest over rise in fuel prices in Rajya Sabha during the Budget Session of Parliament, in New Delhi | Photo:PTI

New Delhi: The Opposition's persistent demand for a discussion on "huge and frequent" increases in petrol, diesel and LPG prices on Monday led to an uproar in the Rajya Sabha, which was adjourned twice in quick succession.

The Rajya Sabha was first adjourned around 10.05 am till 11 am and again till 1 pm on day one of the second leg of the Budget Session.

Leader of the Opposition Mallikarjun Kharge had given a notice for suspension of business on March 8 and a discussion on the "huge and frequent increase in prices of petrol, diesel and LPG even when global prices are ruling low".

Chairman M Venkaiah Naidu mentioned Kharge's notice and disapproved the discussion.Naidu said the issue can be debated "during the course of discussion on the Appropriation bill".

There will also be enough opportunities "during the Budget part of the session", he said.

However the chairman asked Kharge to mention the subject of the notice in the House considering his seniority.

Kharge said, "You are well aware, now petrol prices are nearly Rs 100 per litre and diesel prices are more than Rs 80 per litre. LPG rates have also increased and all petroleum products have gone up."

He added that there has been nearly 820 per cent increase in the prices of petrol and around 258 per cent in excise duty after 2014.

He described it as a burning subject and said people are agitating across the country.

"That's why we are requesting you to suspend all the rules under Rule 267 and give us a chance to speak on this subject. Ultimately, what is the government going to tell about this," Kharge said.

But the chairman did not agree to Kharge's demand.

"You know the Rule 267, it is at the discretion of the Chair. I have gone through it. There are enough opportunities to debate including during discussion on the Appropriation Bill.

"Still you are a senior and Leader of the Opposition, you have given a notice and I have allowed you to mention the subject. You have rightly mentioned the subject and we will leave it there." Kharge persisted with the demand and said the entire country is suffering.

But the chair said, "It is important. We should run the House. It is the first day (of the second leg of the Budget session). Please don't waste time. Please bear with me, I have allowed you to express your views. and you have clearly expressed it. Then we must go on."

"Every issue is important. Now it is Question Hour," he added. However, Opposition members began shouting slogans demanding a debate.

Naidu kept asking members to return to their seats and not deprive members of Question Hour. The Opposition members were relentless in their demand and kept on shouting.

"If you don't want the Question Hour to continue, if you want to deprive people of Question Hour, I can adjourn the House. .... Please go to your seat. 'Loktantra ka mazak nahi karna hai'...," the chairman said.

As members continued to shout, he adjourned the House till 11 am.

When the House re-assembled at 11 am, Congress members again demanded a discussion on rising fuel prices in the country.

Kharge again sought a discussion on the matter.

He said it was important to discuss it as people were suffering and legislative business could be taken up later.

Rajya Sabha Deputy Chairman Harivansh, who was in the Chair, however did not allow the discussion and noted that the decision of the Rajya Sabha chairman cannot be reopened.

Besides, obituary references were made about Vidya Sagar Nishad, M Rama Jois, and Satish Sharma, all former members of the House who passed away recently.

Naidu also gave a brief account of the examination of the Demands for Grants for 2021-22 of various ministries undertaken by the eight Department Related Parliamentary Standing Committees of the Rajya Sabha during the three week recess after the first part of the ongoing Budget Session.

The second part of the Budget Session, which began on Monday, is scheduled to conclude on April 8.