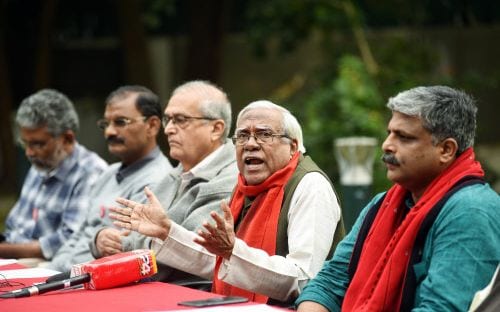 New Delhi: The Left parties on Friday termed the Union government's decision to repeal the three contentious farm laws a "victory of the people's struggle" and indicated that this was just the beginning of the protests against the "anti-people policies" of this dispensation.

Prime Minister Narendra Modi on Friday morning announced the government will repeal the three farm laws and the legislative process will be completed during the upcoming Winter session of Parliament.

CPI(M) general secretary Sitaram Yechury demanded an apology from Modi over the death of farmers during the protest.

"Modi expresses no remorse over the deaths of our 'annadatas' due to his year-long obduracy. Modi continues to justify these black laws even now! Refuses to learn from this historic, spirited, inspiring and brave struggle," Yechury said in a tweet.

"The quest for justice for those targeted by the government and its agencies through 'false' cases will continue. The prime minister must apologise for the hardship and trouble caused by his 'dictatorial' step of farm laws to benefit his 'crony' business partners," he wrote on the microblogging site.

He saluted the farmers for their "brave struggle" and said the sacrifices of those who died during the agitation should not be forgotten.

The CPI(M) leader also demanded that Parliament, while repealing the farm laws, must enact legal entitlement for farmers to sell their crops at minimum support price (MSP).

In a press conference, Yechury said while the prime minister announced the repeal of the laws, he did not assure the main demand of the struggle for the legal entitlement to sell all crops at MSP.

Modi has announced the formation of a committee to examine the issue.

"This (MSP) was an issue when the prime minister was the chief minister of Gujarat when he had written to the then Central government that the MSP should be a legal entitlement. So, there is no need for committees. Committees mean more delay and in effect means denied," Yechury claimed.

He also said the Electricity Amendment Act and matters related to farmers and their demands must be taken up.

The CPI, in a statement, said the prime minister should also consider other demands of the farmers like the repeal of the Electricity Bill, 2021, legal protection to MSP and repeal of Labour Codes. It also demanded suitable compensation be given to the families of over 700 farmers who, the party claimed, died during the agitation.

CPI MP Binoy Viswam, in a video message, said farmers have won the battle against the government.

"This is a moment of victory for the people of India. The farmers fought and won the battle to protect the Indian farming sector from corporate loot.

"They defeated the government which was trying to surrender Indian farming to corporate profit-mongering. Despite the loss of lives and hardships, they fought to protect the food security of India. At last, the Modi government was forced to repeal as it had no other option," he said.

Viswam also alleged that despite the farmers being branded "urban naxals" as part of the "nasty politics being played by the government", they continued to fight.

"The whole country stood like a rock with the farmers. This is a great lesson for the country. This victory will inspire us to fight against more such anti-people policies like labour laws and the national monetisation policy," he said.

Farmers have been demanding that the Farmers' Produce Trade and Commerce (Promotion and Facilitation) Act, 2020; Farmers' (Empowerment and Protection) Agreement on Price Assurance and Farm Services Act, 2020; and the Essential Commodities (Amendment) Act, 2020; be rolled back and a new law made to guarantee the minimum support price for crops.

"Farmers have inflicted the biggest blow till date to the 'arrogant power-drunk' Modi regime! Celebrate the victory, consolidate the gains, carry the movement forward!," tweeted Dipankar Bhattacharya, the general secretary of CPI(M-L).

Welcoming Modi's announcement to repeal the three farm laws, Samyukt Kisan Morcha (SKM), the umbrella organisation of agitating farmers, said it will wait for the announcement to take effect through due parliamentary procedures but also flagged that their other demands are still pending.

"If this happens, it will be a historic victory of the year-long farmers' struggle in India. However, nearly 700 farmers have been martyred in this struggle. The central government's obstinacy is responsible for these avoidable deaths, including the murders at Lakhimpur Kheri," said the SKM in a statement.

It further said the prime minister should remember that the agitation of farmers is not just for the repeal of the three black laws, but also for a statutory guarantee of remunerative prices for all agricultural produce and for all farmers.

"This important demand of farmers is still pending. So also is the withdrawal of the Electricity Amendment Bill. The SKM will take note of all developments, hold its meeting soon and announce further decisions," it added.

Delhi Police to decide whether farmers be allowed in city to protest: SC

Glimpses of farmers' protest in Delhi