Remain non-violent when fighting for a cause, President tells countrymen on R-Day eve

"It should be part of our daily routine to introspect on Gandhiji's message of truth and non-violence, which has become all the more necessary in our times," he said in his speech. 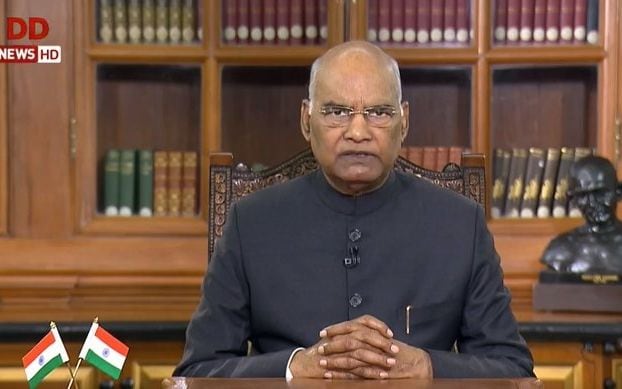 New Delhi: President Ram Nath Kovind on Saturday urged people, particularly the youth, to remain non-violent when fighting for a cause and stressed on the need to "hold fast to constitutional methods" of achieving social and economic objectives.

His remarks come in the backdrop of protests against the new citizenship law although he made no reference to them.

In his customary address to the nation on the eve of 71st Republic Day, Kovind cited Mahatma Gandhi's gift of 'Ahimsa' (non-violence) to the humanity and said that his talisman for deciding whether an act is right or wrong "applies to the functioning of our democracy".

"Yet, on ground, the people comprise the State. 'We the People' are the prime movers of the Republic. With us, the people of India rests the real power to decide our collective future," he said.

Stressing that both the government and the opposition have "important roles to play", the president said "while giving expression to their political ideas both must move forward in tandem to ensure that development of the country and welfare of its people are promoted consistently".

"It should be part of our daily routine to introspect on Gandhiji's message of truth and non-violence, which has become all the more necessary in our times," he said in his speech.

Recalling the importance of January 26, he said that even before 1947, this day was celebrated 'Purna Swaraj Day' (complete independence day) from 1930 to 1947.

Kovind said though the Constitution gave rights to all the citizens of a free democratic nation, but also placed on responsibility to always adhere to the central tenets of the democracy - justice, liberty, equality and fraternity.

"It becomes easier for us to follow these constitutional ideals, if we keep in mind the life and values of the Father of our Nation. By doing so, we will be adding a meaningful dimension to our celebrations of 150th birth anniversary of Gandhiji," he added.

The president said the present third decade of the 21st century will be "the decade of the rise of New India and a new generation of Indians.

"More and more of those born in this century are participating in the national discourse. With the passage of time, we are gradually losing living links with our great freedom struggle, but there is no reason to worry about the continuity of the beliefs that guided it," he said.

Kovind said with advances in technology, the young minds of today are better informed and more confident. "The next generation remains strongly committed to the core values of our nation. For our youth, the nation always comes first. With them, we are witnessing the emergence of a New India," he said.

Concluding his speech by quoting Babasaheb Ambedkar "If we wish to maintain democracy not merely in form, but also in fact, what must we do? The first thing in my judgment we must do is to hold fast to constitutional methods of achieving our social and economic objectives", the president said "these words have always lighted our path. These words will continue to show us the way ahead to new glories".

Speaking about security, he said strong internal security is essential for the development of the country and therefore, the government has taken several concrete steps to strengthen the internal security system.

"I have nothing but unreserved praise for our armed forces, paramilitary and internal security forces. Their sacrifices to preserve the integrity and unity of our country present a saga of unparalleled courage and discipline," he said.

Kovind said as India and Indians march forward, "we remain committed to engaging the global community to build a secure and prosperous future for ourselves and for the entire humanity."

He made a mention about the achievement of Indian Space Research Organisation (ISRO) and said they were making further progress in Mission Gaganyaan. "... The nation excitedly looks forward to the Indian Human Spaceflight Programme gaining further momentum this year."

Speaking about number of welfare scheme launched by the government, Kovind highlighted the ‘Swachchh Bharat Abhiyan' which has achieved astounding success in such a short time.

He said the same spirit could be seen in other endeavours and added "be it giving up cooking fuel subsidy or pushing digital payments, the common man has made the government programmes his own, making them truly effective."

He said the 'Pradhan Mantri Ujjwala Yojana' is a matter of pride, as the target of 8 crore beneficiaries has been achieved. "With this, those in need have access to clean fuel."

About the farmers, he said under 'Pradhanmantri Kisan Samman Nidhi', more than 14 crore farmer families have become entitled to receive minimum annual income of Rupees six thousand which has enabled the farmers, who feed the nation, to live a life of dignity.

He expressed hope that schemes like 'Jal Jeevan Mission', aimed at water conservation, will soon take form of a popular movement.

He said along with the welfare of needy, every policy initiative of the government is guided by the 'nation-first' principle and there is a consistent effort by the government to ensure overall development of each and every part of the country – be it Jammu-Kashmir and Ladakh, the states in the North-East or our Islands in the Indian Ocean.

The president also spoke about sound education system built in ancient times, with the setting up of great universities like Nalanda and Takshashila. "In India, knowledge has always been considered more valuable than power, fame or riches. In our tradition, educational institutions are respected as temples of learning."

He said the educational system mereged as path of empowerment after a long colonial rule.

"Even though the development of our educational institutions commenced soon after Independence, in an environment of scarcity of resources, our achievements in the field of education have followed a remarkable trajectory," he said, adding "our endeavour is to ensure that no child or youth is denied education. At the same time, we need to strive to reach global education standards by continuous reform of our educational systems."