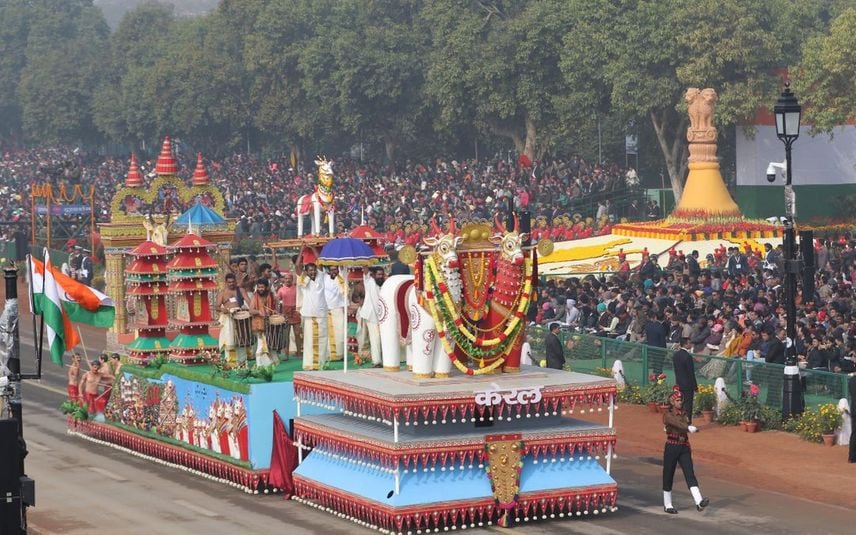 Kerala tableau passing through the saluting dais during the Republic Day parade 2018 in New Delhi. Photo:UNI|File

New Delhi: The Central government on Monday came out strongly against the criticism by state governments over the non-inclusion of their tableaux in the forthcoming Republic Day celebrations.

The Centre said this is a wrong precedent adopted by the Chief Ministers to portray an outcome of an objective process as a flashpoint between the Central and states governments.

The Centre claimed that this goes a long way in harming the country's federal structure.

"We have recently seen letters being written by chief ministers of some states about the exclusion of their state's tableaux in the Republic Day Parade. This is unmistakably linked to regional pride and projected as an insult to the people of the state by the Central Government. This script also plays out almost every year. Perhaps the Chief Ministers have no positive agenda of their own when they have to resort to the same old trick using misinformation year after year," government sources said.

Talking about the tableaux selection process, sources pointed out that "first of all, it is not the Narendra Modi government which decides on the tableaux".

"The tableaux proposals received from various states and central ministries are evaluated in a series of meetings of the Expert Committee consisting of eminent people in the field of art, culture, sculpture, music, architecture, choreography, etc. The Expert Committee examines the proposals on the basis of theme, concept, design and visual impact before making its recommendations," they said.

Government sources explained that due to time constraints, only some of the proposals can be accepted.

For example, for this year's Republic Day Parade, a total of 56 proposals were received from states and central ministries.

Out of these 56, 21 proposals have been shortlisted. "It is natural for more proposals to be rejected than those accepted given the paucity of time," a source said.

The sources further mentioned that similarly, the tableaux proposals of Tamil Nadu were accepted through the same process and system under the same Modi Government in 2016, 2017, 2019, 2020 and 2021.

"It should be also noted that the tableaux proposals of West Bengal were accepted through the same process and system under the same Modi Government in 2016, 2017, 2019 and 2021. Furthermore, this year's tableau of CPWD includes Netaji Subhas Chandra Bose, so the question of his insult does not even arise," sources added.

No revision of decision on exclusion of Kerala, TN, WB tableaux on R-Day: Defence ministry