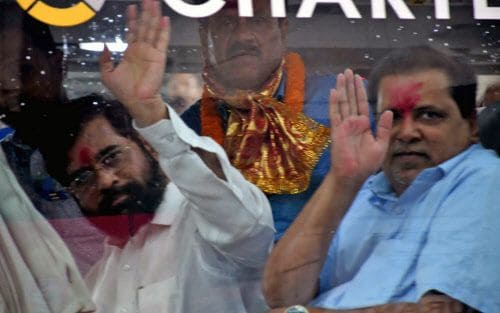 A charter plane of private carrier SpiceJet took off at 6.56 pm from the Lokpriya Gopinath Bordoloi International (LGBI) Airport in Guwahati for the Dabolim airport in Goa, official sources told PTI.

The Maharashtra MLAs had initially planned to leave Guwahati around 3 pm but were delayed by nearly four hours.

The Shiv Sena MLAs along with some Independent legislators were camping in Guwahati, around 2,700 km away, since June 22, plunging their government in Maharashtra into crisis.

The MLAs checked out of the Radisson Blu hotel in the Gotanagar area around 5 pm, wearing traditional Assamese 'Gamosas' around their necks and carrying packets of Assam tea.

Along with some of their families and associates, the MLAs took four air-conditioned luxury buses of the Assam State Transport Corporation (ASTC) to reach the airport, around 15 km away, under a heavy security cover.

Guwahati Police Commissioner Harmeet Singh, Joint Commissioner Partha Sarathi Mahanta and other senior officers were also present at the airport, which was being guarded by hundreds of policemen since the morning.

Speaking to reporters at the airport, Shinde objected to being called Shiv Sena "rebels" and asserted that the members of his group were the "real Shiv Sainiks".

Maintaining that he will act as per the Supreme Court's directions, he said that the MLAs accompanying him have planned to reach Mumbai on Thursday to participate in the floor test ordered by the Maharashtra governor.

"We will decide our future strategy after that," Shinde said when asked if the dissidents will support a BJP-led government.

"We are Balasaheb Thackeray's Shiv Sainiks. We will take forward the Hindutva ideology. We will work for the development of Maharashtra and the people of the state," he added. PTI