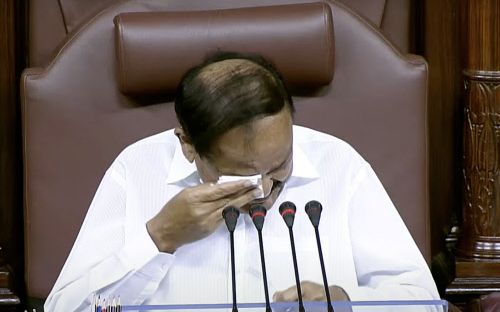 New Delhi: Lok Sabha passed two bills and a bill was passed by Rajya Sabha on Monday as the two Houses were adjourned sine die, four days ahead of the scheduled end of the monsoon session.

In Rajya Sabha, a warm farewell was given to outgoing Chairman Venkaiah Naidu with members recalling his efforts to run the House smoothly and his personal qualities.

Power Minister RK Singh on Monday introduced 'The Electricity (Amendment) Bill, 2022' in Lok Sabha amid strong opposition by opposition parties who sought its withdrawal. They said the bill was "anti-farmer".

The bill was subsequently referred to the standing committee.

Addressing the concerns of opposition members, the minister said the government has consulted all stakeholders and the bill is in the interest of farmers. He said the bill will not stop farmers from getting subsidised power.

The objects and reasons of the bill state that it has become necessary to make certain amendments in the Electricity Act, 2003 in view of continuing as well as new challenges of sustainability of the power sector, contract enforcement, payment security mechanism, energy transition and the need to provide choice to consumers in order to promote competition.

It states that amendments to the Act are also necessary in view of the importance of green energy for the environment in the context of global climate change concerns and international commitments to increase the share of renewable energy.

The Rajya Sabha passed the Central Universities (Amendment) Bill, 2022. The bill seeks to convert the National Rail and Transportation University, a deemed-to-be university in Gujarat, into Gati Shakti Vishwavidyalaya. The bill had been passed by Lok Sabha earlier.

The Energy Conservation (Amendment) Bill, 2022 was passed in Lok Sabha after a reply by Power Minister RK Singh.

The bill seeks to amend the Energy Conservation Act, 2001.

The Energy Conservation Act, 2001 was amended in 2010 to address various new factors which emerged with the development of the energy market over a period of time and to provide for more efficient and effective use of energy and its conservation.

The minister said that with the passage of time, and in the context of the energy transition with a special focus on the promotion of new and renewable energy and the National Green Hydrogen Mission, a need has arisen to further amend the said Act to facilitate the achievement of "Panchamrit"-- as five nectar elements presented by India in COP-26 (Conference of Parties -26) in Glasgow 2021 and to promote renewable energy and development of domestic Carbon market to battle climate change.

The objects and reasons of the bill state that there is also a need to introduce new concepts such as Carbon trading and mandate the use of non-fossil sources to ensure faster decarbonization of the Indian economy and help in achieving sustainable development goals in line with the Paris Agreement and various other actions related to climate change.

The objects and reasons also state that it is considered necessary to have legal provisions to prescribe minimum consumption of non-fossil energy sources as energy or feedstock by the designated consumers.

This will help in the reduction of fossil fuel-based energy consumption and resultant carbon emissions to the atmosphere. Similarly, a need is also felt to provide a legal framework for a carbon market with the objective of incentivizing actions for emission reduction leading to increased investments in clean energy and energy efficiency areas, by the private sectors.

The Energy Conservation (Amendment) Bill, 2022 "seeks to mandate use of non-fossil sources, including Green Hydrogen, Green Ammonia, Biomass and Ethanol for energy and feedstock" and establish Carbon Markets.

It seeks to bring large residential buildings within the fold of the Energy Conservation regime, enhance the scope of the Energy Conservation Building Code and amend penalty provisions.The bill also seeks to increase members in the Governing Council of the Bureau of Energy Efficiency and empower the State Electricity Regulatory Commissions to make regulations for smooth discharge of its functions.

In his valedictory remarks, outgoing Rajya Sabha Chairman M Venkaiah Naidu said the House conducted business for 38 hours while it lost 47 hours due to disruptions during the session.

Terming it as a sad reflection on the functioning of the Upper House, Naidu said continuous disruption denied the members opportunity to discuss matters of urgent public importance. He said that the Question Hour could not be taken up on seven days. Talking about the business of the Upper House, the Chairman said, only five Bills were considered and passed. Naidu added that the House took up a short duration discussion on the rising prices of essential items in the country.

In his closing remarks in the Lok Sabha on Monday, Speaker Om Birla said, six bills were introduced and seven bills were passed during the session. He said, 16 sittings were held and the House conducted business for more than 44 hours. Birla said, the House also held two short-duration discussions on the price rise and steps to promote sports in the country.

In his reply to the debate on New Delhi International Arbitration Centre (Amendment) Bill, 2022, Union Law Minister Kiren Rijiju said the objective of the amendment is to have world-class arbitration in the country.

He said that though it is a small Bill, sometimes "a small step can be a giant leap". The Minister further said that arbitration would also help in reducing the pendency of cases in the country.

In the session, which began on July 18, the government and opposition have been at loggerheads over a host of issues, including inflation and alleged misuse of central agencies against opposition leaders.

The monsoon session commenced on July 18 and was scheduled to end on August 12.