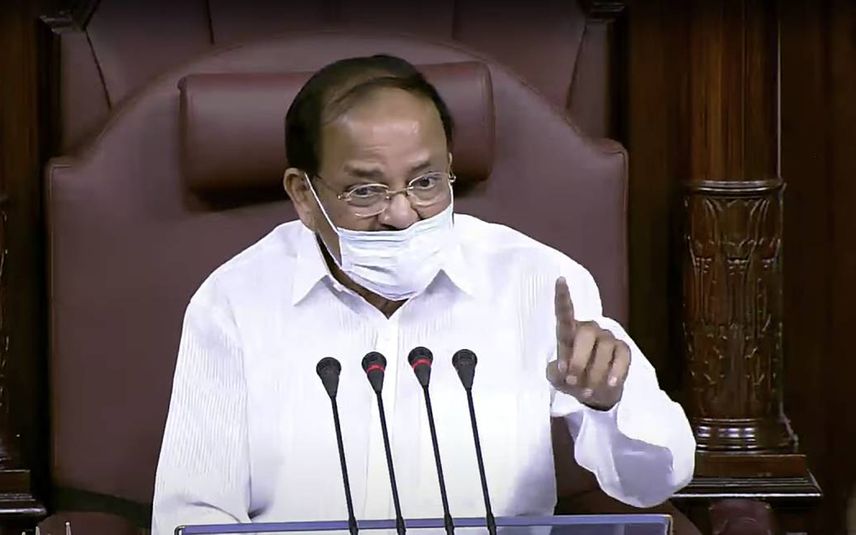 New Delhi: Rajya Sabha proceedings were adjourned till 12 pm on Wednesday as Opposition parties raised slogans over various issues while Chairman M Venkaiah Naidu was making a remark on the conduct of some members in the House the day before.

As the House assembled for the day, Naidu expressed deep anguish over some opposition MPs climbing on the Table in the House on Tuesday, saying he couldn't sleep because of the sacrilege of the temple of democracy.

Referring to Tuesday's events, Naidu said Parliament, the apex legislature of the country, is regarded as the "temple of democracy".

The Table area where officers and reporters of the House, the Secretary General and the Presiding Officer sit is considered as the holy sanctum sanctorum of the House, he said.

A certain degree of sacredness is attached to this place, Naidu said, and added in temples, devotees are allowed only up to this sanctum sanctorum and not beyond.

Entering this sanctum sanctorum of the House in itself is an act of sacrilege and it has become a routine over the years, he said.

"I am distressed by the way this sacredness has been destroyed yesterday. While some members sat on the Table, some others climbed on the Table of the House, perhaps to be more visible with acts of sacrilege. I have no words to convey my anguish and to condemn such acts," the Chairman said.

Naidu further said he "spent a sleepless night last night". As he was making the remarks, several opposition party MPs trooped in the Well of the House and started sloganeering over various issues. The Chairman adjourned the proceedings till noon.