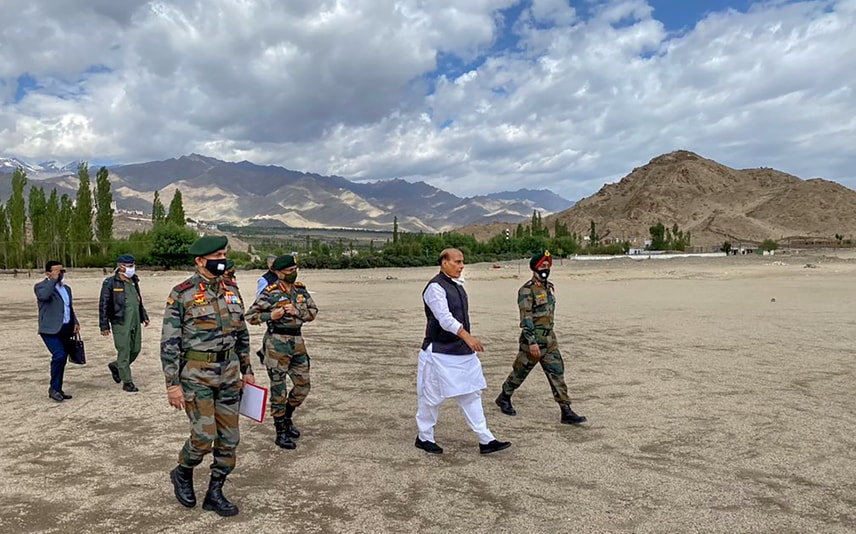 New Delhi: Defence Minister Rajnath Singh on Saturday reviewed the overall security scenario in eastern Ladakh, two days after India and China held a fresh round of diplomatic talks to resolve the border row in the high-altitude region, people familiar with the developments said.

Separately, the Indian Army said a meeting of the Army commanders took place from August 20-21 to review the security situation and operational preparedness on both the northern and western fronts.

All "important aspects" of the border row with China in eastern Ladakh were discussed in great detail, the people familiar with the developments said, adding the meeting also deliberated on the future course of approach in dealing with the situation.

Gen Naravane made a brief presentation about India's operational readiness, deployment of troops and weapons as well as on arrangements being made to maintain the current strength in all sensitive areas along the Line of Actual Control in the harsh winter months, they said.

India is not going to lower its guard at all, government sources said.

The Indian Army is strongly insisting during the talks that the Chinese side must restore the status quo ante of April this year to resolve the row, they added.

The sources said the assessment by the Army is that the Chinese military is not serious about the resolution of the border conflict.

It is learnt that the Army commanders at the two-day meeting deliberated on all possible security challenges along the borders with China as well as Pakistan and the measures needed to be taken to deal with them effectively.

India and China have held several rounds of military and diplomatic talks in the last two-and-half months but no significant headway has been made in resolution of the border row.

On Thursday, the two sides held another round of diplomatic talks following which the Ministry of External Affairs (MEA) said they had agreed to resolve outstanding issues in an "expeditious manner" and in accordance with the existing agreements and protocols.

The sources said the meeting could not produce any significant outcome.

In the military talks, the Indian Army has clearly stated to the Chinese People's Liberation Army (PLA) that "shifting" of the Line of Actual Control is not acceptable to it, the sources said adding Chinese military is now desperately attempting to give "ex post facto strategic meaning" to its actions in eastern Ladakh.

Even as both sides have been engaged in diplomatic and military talks, the Indian Army is making elaborate preparation to maintain its current strength of troops in all key areas in eastern Ladakh in the harsh winter months.

"The Army is ready for a long haul along the Line of Actual Control," said a military official on the condition of anonymity.

Army Chief Gen Naravane has already conveyed to all the senior commanders of the Army, overseeing operation of the frontline formations along the LAC, to keep up a significantly high state of alertness and maintain the aggressive posturing to deal with any Chinese "misadventure", the sources said.

The Army is also in the process of procuring a number of weapons, ammunition and winter gears for the frontline troops, they added. The temperature in some of the high-altitude areas along the LAC drops to minus 25 degrees Celsius in the winter months.

Sources said notwithstanding the border row, India has been carrying on with laying new roads in the Ladakh region.

The formal process of disengagement of troops began on July 6, a day after a nearly two-hour telephonic conversation between NSA Doval and Chinese Foreign Minister Wang Yi on ways to bring down tensions in the area. However, the process has not moved forward since mid-July.

The Chinese military has pulled back from Galwan Valley and certain other friction points but the withdrawal of troops has not moved forward in Pangong Tso, Depsang and a couple of other areas, sources said.
In the five rounds of corps commander-level talks, the Indian side has been insisting on complete disengagement of Chinese troops at the earliest, and immediate restoration of status quo ante in all areas of eastern Ladakh prior to April.

The tension between the two sides escalated manifold after the violent clashes in Galwan Valley on June 15 in which 20 Indian Army personnel were killed. The Chinese side also suffered casualties but it is yet to give out the details. According to an American intelligence report, the number of casualties on the Chinese side was 35.

Following the Galwan Valley incident, the government gave the armed forces "full freedom" to give a "befitting" response to any Chinese misadventure along the LAC. The Army sent thousands of additional troops to forward locations along the border following the deadly clashes. The IAF has also moved air defence systems as well as a sizeable number of its frontline combat jets and attack helicopters to several key airbases. PTI

Ernakulam youth sets off motorcycle trip to Ladakh with mother