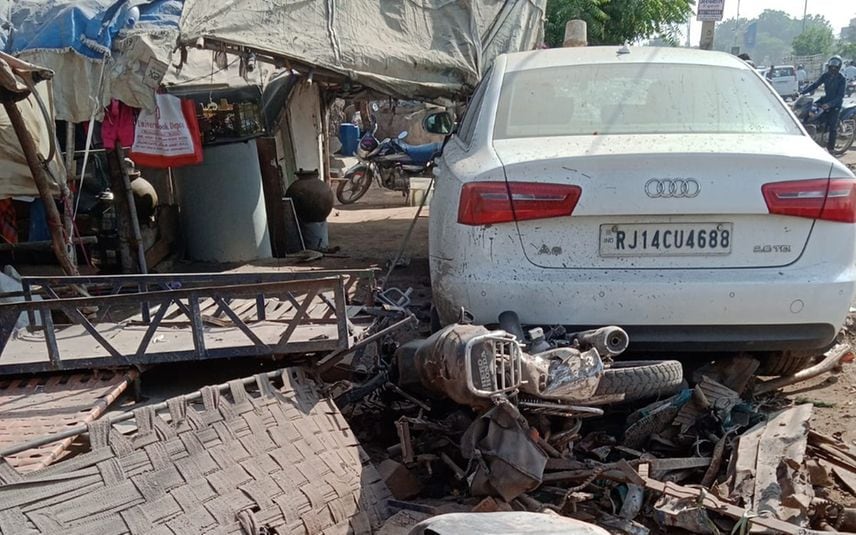 Jodhpur (Rajasthan): One person died and eight others were injured when a speeding luxury car rammed into roadside makeshift huts at AIIMS road here on Tuesday morning. The car also hit many two-wheelers on the road.

According to police, all the injured were rushed to the nearby AIIMS hospital, where one succumbed to injuries and eight others are undergoing treatment.

The deceased was identified as Mukesh (30), three of the injured were inhabitants of the huts while four others were commuters, who were hit by the car.

Chief Minister Ashok Gehlot, who reached Jodhpur on Tuesday morning for a day's visit, rushed to the hospital straight from the airport and visited all the injured patients. He talked to them and gave directions to the AIIMS doctors and administration to provided best care for their recovery.

He announced Rs 2 lakh ex-gratia for the deceased, Rs 1 lakh for the seriously injured and Rs 50,000 for those with minor injuries.

According to the ACP (West) Noor Mohammad, the speeding car was coming from Pal Road side towards AIIMS when it lost balance and rammed into roadside huts after hitting a few two-wheelers.

"The car was running at a high speed. The driver was identified as Amit Nagar, who surrendered himself to the police and has been detained," the officer said.