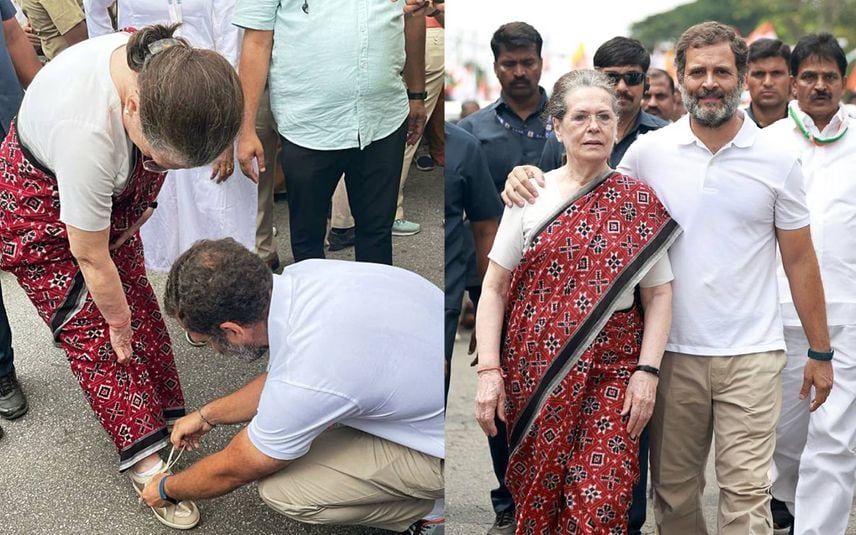 Mandya: The photo and video of Rahul Gandhi tying the shoelace of his mother, Congress interim President Sonia Gandhi during the Bharat Jodo Yatra in Mandya district of Karnataka on Thursday has gone viral on social media.

Sonia Gandhi had joined the Yatra which is led by Rahul Gandhi near Bellur Cross in Mandya district. When Sonia Gandhi came down from her vehicle to take part in the padayatra, Rahul Gandhi observed that Sonia Gandhi's shoelaces were not properly tied and he himself went forward to tie the lace instead of asking his mother to do it herself.

The Karnataka Congress Unit uploaded the picture and video to social media. "Those who respect and care for their mothers, will also honor the motherland," the Congress stated.

The Congress party's social media post claimed that "in every step of Sonia Gandhi there is firmness; there is faith; there is patience; commitment; clarity; sacrifice; affection; empathy; sweetness of motherhood; limitless love towards the country and capacity to take insults."

Due to ill health Sonia Gandhi participated in the padayatra briefly and will be leaving for New Delhi later in the day.

Earlier, Rahul Gandhi had helped a little girl to wear her footwear correctly in Kerala's Alappula district. The photo had gone viral on social media and his humbleness was appreciated. During Bharat Jodo Yatra, the little girl was struggling to walk properly, Rahul Gandhi had observed this and went ahead to help her out.

The photo of Rahul Gandhi delivering a speech amid heavy rainfall in Karnataka had also gone viral on social media.

'I came into politics as I am angry; joined Bharat Jodo Yatra for united India', says Kamal Haasan