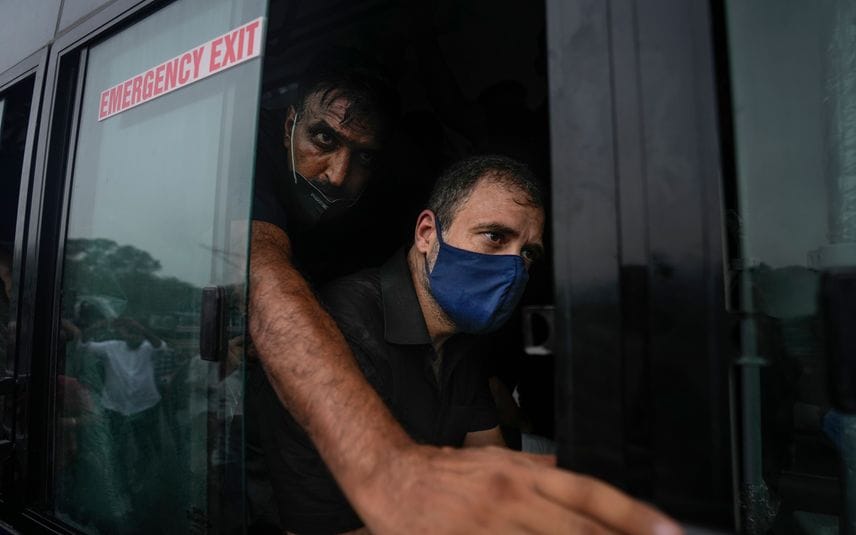 New Delhi: Congress leaders, including Rahul Gandhi, Priyanka Gandhi and Shashi Tharoor, were detained while marching to Rashtrapati Bhavan to mark their protest against inflation, price rise, GST and unemployment on Friday.

The Delhi Police has imposed Section 144 of the CrPC in the New Delhi district except for Jantar Mantar ahead of the Congress party's call for nationwide protests against inflation and unemployment.

The party has decided to stage a pan-India protest on Friday and hold a demonstration outside the residences of Prime Minister Narendra Modi and President Droupadi Murmu, however, it was denied by the Delhi Police.

Despite no permission from the Delhi Police, the party leaders said that they will go ahead with their proposed protest march.

Visuals showed Congress General Secretary Priyanka Gandhi Vadra jumping over a police barricade placed near the AICC office here during a party protest against price rise and unemployment in Delhi. She was later detained by police during the Congress protest.

Congress MP Rahul Gandhi was detained by police during a protest against the Central government on price rise and unemployment in Delhi.

"Our job is to raise the issues of the people...Some Congress MPs detained, also beaten by police," said Congress MP Rahul Gandhi to reporters during a protest against price rise and unemployment at Vijay Chowk.

"All Congress MPs were marching towards Rashtrapati Bhawan to raise the issue of inflation and price rise but they are not allowing us to go ahead from here. Our job is to raise the issues of the people...Some MPs detained, also beaten," he said prior to being detained.

"This protest is about price rise and Agnipath. Price rise affects everybody. As a political party and as elected representatives we are bound to voice the grievances the burdens and the fears of the people. This is what we are doing," Congress MP and senior leader P Chidambaram said to reporters.

Women paramilitary personnel are queued right on the other side of the barricades to stop the Congress MPs from protesting. They have also planned to gherao the PM House.

Meanwhile, Congress leader Rahul Gandhi, addressing a press conference, said that there is no democracy in India now and that our country is under the dictatorship of four people.

Congress party leaders Sonia Gandhi, Rahul Gandhi, Priyanka Gandhi Vadra and MP Mallikarjun Kharge among others chose to sport black outfits to mark their support for the protests called by Congress on price rise and inflation.

Comparing PM Modi with Hitler, Rahul Gandhi said, "Hitler had also won elections, he too used to win elections. How did he use to do it? He had control of all of Germany's institutions...Give me the entire system, then I will show you how elections are won."

Rahul Gandhi further said, "We're witnessing the death of democracy. What India has built brick by brick, starting almost a century ago, is being destroyed in front of your eyes. Anybody who stands against this idea of the onset of dictatorship is viciously attacked, jailed, arrested and beaten up."

Soon after Rahul Gandhi's press conference, BJP's Gaurav Bhatia said, "Sonia Gandhi and Rahul Gandhi had got bail in 2015 in the National Herald case. This case was filed long back and they were not even raising such issues (that ED is being controlled) then. It's just a tactic to divert attention from the fact that they have been caught red-handed. Bhatia's comments came after Rahul Gandhi alleged that ED and other independent institutions were being controlled by the BJP and the RSS and used to intimidate the Opposition."

The Congress today is protesting against rising prices, unemployment and GST rate hike. In Delhi, the party leaders are marching to the Rashtrapati Bhawan from the Parliament. The party's state units will hold similar protests across the country.

Citing the restrictions, the Delhi police has denied permission to the Congress for holding a protest in the national capital. (ANI)