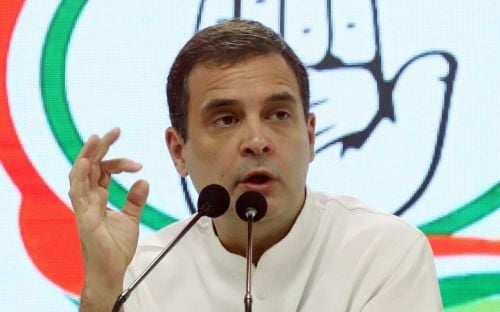 New Delhi: Congress leader Rahul Gandhi on Wednesday extended his support to the aspirants protesting against "anomalies" in the Railway Recruitment Board exam, saying he is with them against the policies of the BJP government.

"Students, you are the hope of the country and your family. Against the policies of the BJP government, I am and will be with you on the side of truth but violence is not our way. If you can take freedom from non-violence, then why not your right?" the Congress MP said in a tweet.

Aspirants protesting against the alleged irregularities in the Railway Recruitment Board exam allegedly set a bogie of the Bhabua-Patna Intercity Express on fire on Wednesday in Bihar's Gaya.

Union Railway Minister Ashwini Vaishnav had on Wednesday urged students not to take the law into their hands and assured them of addressing their concerns.

"I request students not to take the law into their hands. We will seriously address the grievances and concerns raised by them. Whatever concern students want to share, they can share with the committee set up by Railway Ministry and we will take note of it but do not take law and order in your hand," said Vaishnav, on students' protest against alleged irregularities in Non-Technical Popular Categories exams.

The Railway Ministry has also formed a high power committee to look into the concerns and doubts raised by job aspirants with regard to the results of the 1st Stage Computer Based Test (CBT) of Centralized Employment Notification (CEN) of Non-Technical Popular Categories (NTPC) issued by Railway Recruitment Boards (RRBs) on January 14-15.

Candidates are given three weeks time up to February 16, to submit their concerns and the committee after examining these concerns will submit their recommendations by March 4.

The police had to release several rounds of tear gas to stop the miscreants.

Hundreds of students had blocked the Kolkata-New Delhi main railway line at Rajendra Nagar Terminal in Patna on Tuesday.

The results of the RRB NTPC for the CBT-1 exam were released on January 15 for shortlisting the candidates for CBT-2.

In view of the students' agitation in the Railway Recruitment Board exam, the Railway Ministry has decided to suspend both the Non-Technical Popular Categories (NTPC) and Level 1 tests scheduled to be held on February 15 and February 23. (ANI)