Congress leader Rahul Gandhi, who is leading the party's pan-India Bharat Jodo Yatra, on Sunday suddenly started to sprint along with some school children, forcing others to run. 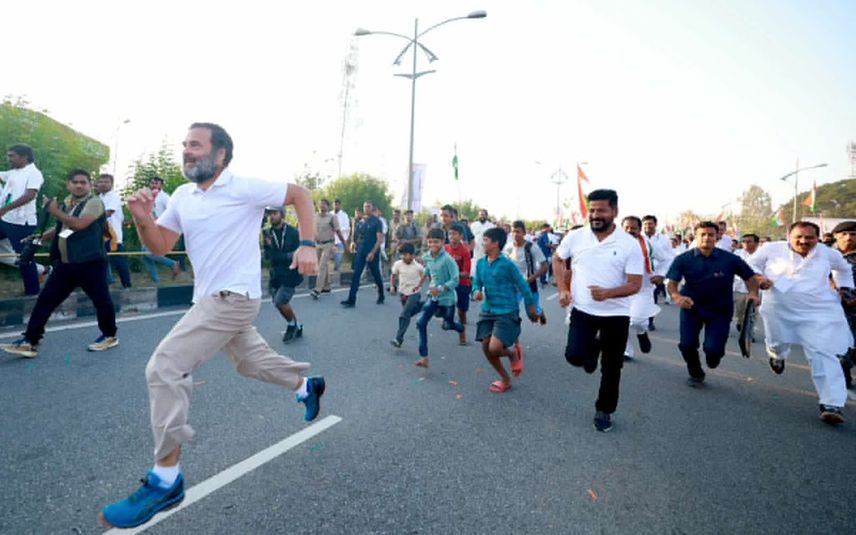 Telangana: Congress leader Rahul Gandhi who is leading the party's pan-India Bharat Jodo Yatra on Sunday gave some exciting moments during the foot march as he suddenly started to sprint along with some school children, forcing others to run.

Joined by party leaders and cadre, Gandhi resumed his foot march from here this morning and is expected to cover a distance of 22 kilometres, Congress sources said.

This is the fifth day of the party's campaign in the state.

Gandhi will address a Corner Meeting at Solipur junction at Shadnagar in the evening, before halting for the day.

The Gandhi scion-led yatra completed over 20 km on Saturday, before halting at Jadcherla X Road Junction for the night.

The yatra will cover 19 Assembly and 7 Parliamentary constituencies in poll-bound Telangana, spanning a total distance of 375 km in the state, before entering Maharashtra on November 7. The yatra will take a one-day break on November 4.

The Wayanad MP will meet intellectuals, leaders of various communities, including personalities from the sporting, business and entertainment sectors during the party campaign in the southern state.

He will also visit prayer halls, mosques and temples across Telangana, members of the Telangana PCC said.

The Bharat Jodo Yatra commenced on September 7 from Kanyakumari in Tamil Nadu.

Gandhi completed the marathon walk in Kerala, Andhra Pradesh and Karnataka, before beginning the Telangana leg of the yatra last week.

The Telangana State Congress has formed 10 special committees to coordinate the yatra.