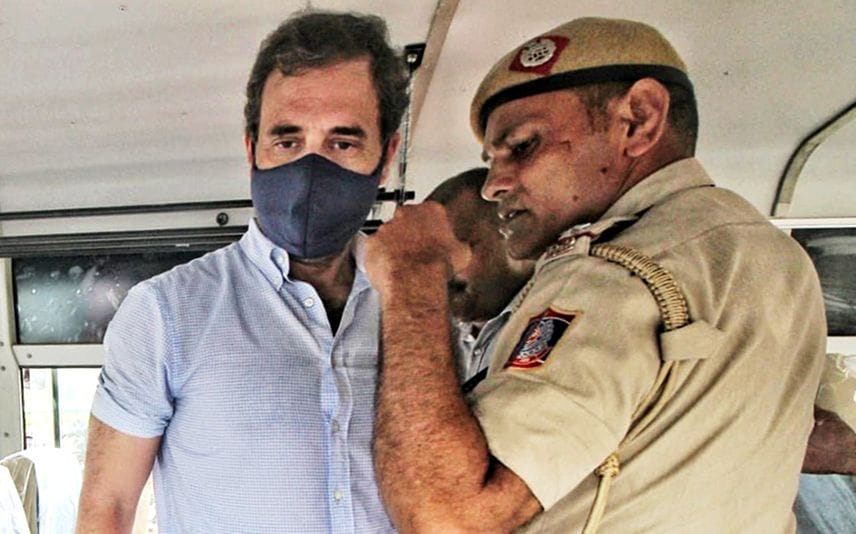 New Delhi: Former Congress president Rahul Gandhi and several party MPs were detained by police at Vijay Chowk on Tuesday after they staged a protest against the ED questioning of Sonia Gandhi.

Rahul Gandhi and the other Congress MPs had gathered at Vijay Chowk to march towards the Rashtrapati Bhavan to draw the President's attention to the alleged misuse of agencies by the government, but were stopped by the police.

Gandhi was put in a police bus but officials did not disclose where he was being taken.

Other Congress MPs at the Vijay Chowk protest site were detained and taken away in separate police buses.

"India is a police state, Modi is a king," Rahul Gandhi alleged.

He said discussions were not being allowed in Parliament.

"I am not going anywhere. We wanted to go towards the President's house. But the police are not allowing us," Gandhi said.

"All Congress MPs stopped at Vijay Chowk and prevented from marching to Rashtrapati Bhavan. Forcibly arrested. Now we are in police buses being taken to a place only PM and HM know where…," Congress Rajya Sabha MP Jairam Ramesh tweeted.

The Congress MPs had earlier gathered at Parliament to decide on the party's strategy as Sonia Gandhi appeared before the Enforcement Directorate for questioning in a money laundering case pertaining to the National Herald newspaper, for the second time.

Rahul Gandhi has already appeared before the probe agency for questioning in the same case. PTI