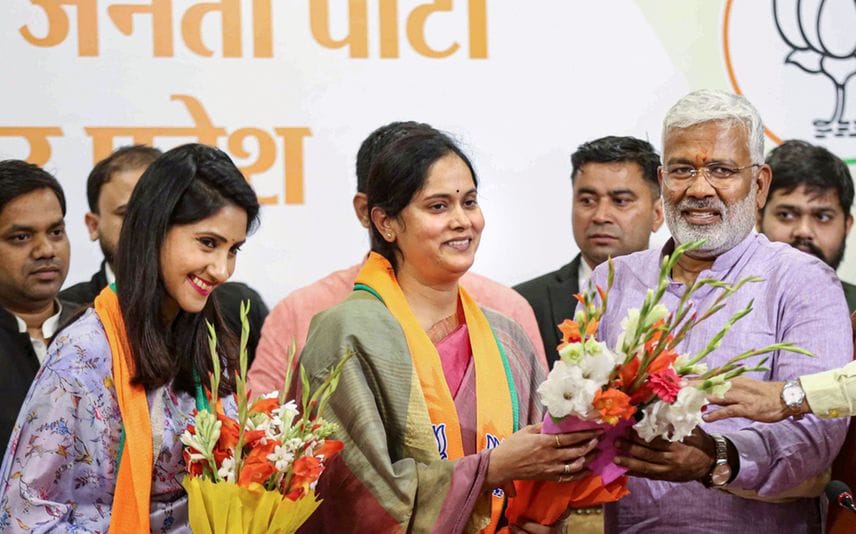 Lucknow: Months ahead of the 2022 Uttar Pradesh Assembly elections, the BJP got a shot in the arm as two opposition MLAs, including the Congress legislator from Rae Bareli, joined the party here on Wednesday.

Welcoming the sitting legislators, Swatantra Dev Singh said, "Both of them will show in the coming months how strong they are. They work for the upliftment of the poor and downtrodden in their respective areas, and the BJP will gain from them."

Speaking to reporters, Aditi Singh said, "My effort will be to contest from the same seat (Rae Bareli) till I am in politics. However, I will abide by the decision of the party high command, and it will be of utmost importance for me."

Asserting that she will "counter Sonia Gandhi and Priyanka Gandhi Vadra with her hard work", Aditi Singh said, "Development has been the main issue for me, and it will remain so."

Asked whether she is eyeing a ministerial post, she replied, "First, I have to become an MLA in the 2022 assembly election."

Interacting with the media, Vandana Singh said her main task would be to ensure that the BJP wins the Sagri Assembly seat.

On she decided to join the BJP, Vandana Singh said, "She (Mayawati) had supported me in 2017, and I had won the elections. But owing to a minor mistake which was not even committed by me, I was suspended from the party. My side was not even heard, and action was taken against me based on news reports and feedback given to her by some persons. I was not even called (for an explanation). I was saddened by this."

With Vandana Singh joining the saffron camp, the BJP hopes to strengthen itself in Azamgarh, which is represented in the Lok Sabha by Samajwadi Party chief Akhilesh Yadav.

In October 2020, seven BSP MLAs, including Vandana Singh, were suspended by party president Mayawati. They had opposed the nomination of the party's official candidate Ramji Gautam for the elections to the Rajya Sabha.

Union Home Minister Amit Shah, during his November 13 visit to Azamagarh, had targeted the Samajwadi Party, alleging it stood for "Jinnah, Azam Khan and Mukhtar (Ansari)", and asserted that Chief Minister Yogi Adityanath has rid the Purvanchal region of "mosquitoes and mafia".