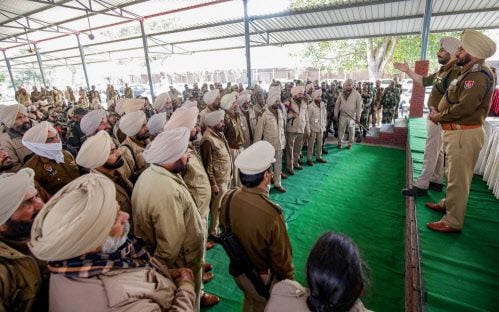 Chandigarh: After weeks of high voltage poll campaigning for Punjab Assembly elections, over 2.14 crore voters of the state will decide the fate of 1304 candidates in the fray from 117 constituencies on Sunday.

Polling began in the state at 7 AM today.

The Congress party is seeking another term under Charanjit Singh Channi's leadership while the SAD which has formed an alliance with Mayawati's Bahujan Samaj Party (BSP) is hoping for a comeback after 10 years. Aam Aadmi Party (AAP) which emerged as the second-largest party in the 2017 elections has highlighted its government's works in Delhi to urge voters for a chance in Punjab under Bhagwant Mann.

CM Charanjit Singh Channi, who is the Congress's chief ministerial face, is contesting from two seats Chamkaur Sahib and Bhadaur.

The BJP has pitted its Punjab unit chief Ashwani Kumar Sharma from the Pathankot constituency.

Punjab Chief Electoral Officer Dr S Karuna Raju informed there are 2,14,99,804 voters in Punjab who are eligible to exercise their franchise on Sunday. He said that there are 1304 candidates--1209 male, 93 women and two transgenders are in the fray in 117 constituencies. A total of 1,304 candidates-- 231 are from national parties, 250 from state parties, 362 from unrecognised Parties, and 461 are Independent candidates.

He said that as many as 315 contesting candidates are with Criminal Antecedents.

He informed that there would be 1196 Model Polling Stations, 196 Women Managed Polling Stations and 70 PwD managed polling stations. As many as 28,328 ballot units and 24,740 EVM-VVPATs are being used in this election, the CEO informed.

Divulging more information, the CEO said that apart from three Special State Observers, ECI has appointed 65 General Observers, 50 Expenditure Observers and 29 Police Observers, who are keeping close vigil. As many as 2083 sector officers have been deployed to assist polling parties, he added.

In the 2017 Punjab Assembly polls, Congress won 77 seats in the 117-member House, whereas Shiromani Akali Dal could win only 18 seats. On the other hand, AAP emerged as the second-largest party with 20 seats. ANI