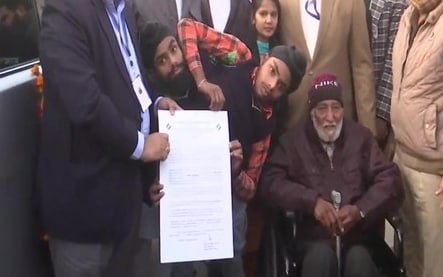 Amritsar: Conjoined twins Sohna and Mohna cast their votes in the Manwal area of Amritsar district on Sunday.

Both of them will be counted as separate voters. Returning Officer (RO) provided them with goggles so that the secrecy of their vote was maintained. Videography was also done.

They cast their votes at Polling booth number 101.

"It is a very unique case. They are conjoined but two separate voters. They are icons of PWD voters. Arrangements were made by the RO of giving them goggles so that the secrecy of voting is maintained," said Gaurav Kumar, PRO while talking to ANI.

Voting for 117 constituencies for Punjab Assembly elections began at 8 am on Sunday amid tight security.

In Punjab, over 2.14 crore voters will decide the fate of 1304 candidates who are in the fray from 117 constituencies.

There are 2,14,99,804 voters in Punjab who are eligible to exercise their franchise on Sunday. He said that there are 1304 candidates--1209 male, 93 women and two transgenders are in the fray in 117 constituencies spread across 23 districts of the state.

The counting of votes will be done on March 10. ANI