Delhi Chief Minister and Aam Aadmi Party (AAP) national convenor Arvind Kejriwal welcomed Mann's announcement. He said his government has eradicated corruption in the national capital and now Mann and his ministers will run an honest government in Punjab as well. 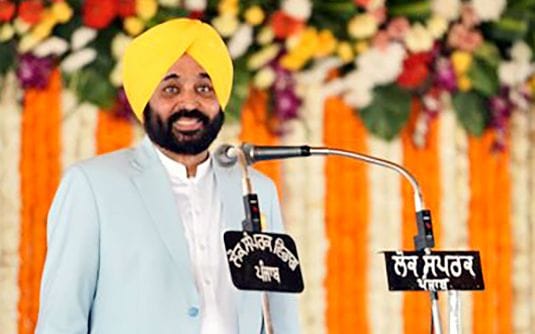 Chandigarh:Punjab Chief Minister Bhagwant Mann on Thursday announced that his government will launch an anti-corruption helpline number on March 23 that will allow people to upload videos of corrupt officials asking for a bribe or indulging in other malpractices.

He said it is his "personal WhatsApp number" and asserted that he will ensure a corruption-free government in the state.

Delhi Chief Minister and Aam Aadmi Party (AAP) national convenor Arvind Kejriwal welcomed Mann's announcement. He said his government has eradicated corruption in the national capital and now Mann and his ministers will run an honest government in Punjab as well.

In a video message, Mann reminded people that when the AAP came to power in Delhi, people were asked to provide videos of corrupt officials. "With this, corruption ended completely in Delhi," he claimed.

"In the coming days, we will launch such a helpline number that will be my personal WhatsApp number. If anyone demands a bribe from you, do not refuse it. Record a video or audio of it and send it to this number. I guarantee you, our office will examine it and no corrupt person will be spared and strict action will be taken," he said.

Mann said this helpline number will be launched on March 23, the death anniversary of freedom fighter Bhagat Singh.

The chief minister said it will be a big announcement in the history of Punjab.

During an online briefing, Kejriwal recalled he had done something similar in his first stint in Delhi that lasted 49 days.

"When I had formed the government for the first time, I had also issued a WhatsApp number. During those 49 days, we took action against 30-32 officials by sending them to jail. Corruption was eradicated in Delhi and the phone became the biggest weapon of empowerment of the common public," he said.

"It's been 75 years since we have gained independence but we still have to pay bribes. All parties have indulged in corruption. The Aam Aadmi Party is the first party to run an honest government.

"Kejriwal and his ministers, Mann and his ministers are not corrupt. We don't want 'hafta' (protection money). Just like we eradicated corruption in Delhi, we will end it in Punjab as well," he said.

Kejriwal assured people that strict action will be taken on their complaints.

Mann took oath as Punjab chief minister on Wednesday. The AAP stormed to power after winning 92 seats in the 117-member Punjab Assembly. PTI