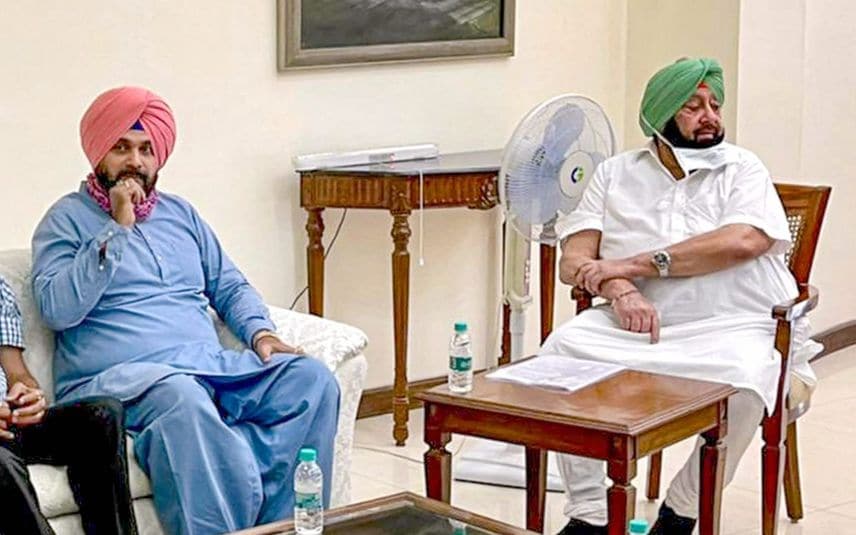 Chandigarh: Amid the escalating crisis in Punjab Congress, reports have been coming out that Navjot Singh Sidhu is likely to stay as Punjab Congress chief. Chief Minister Charanjit Singh Channi has reportedly agreed to pull back from a few appointments which Sidhu had resisted. On Tuesday Sidhu put in his paper abruptly after irked by a few appointments made by Channi.

Sidhu and Channi met on Thursday to discuss the issues and the meeting lasted for over two hours. The issues raised by Sidhu will be put before the Cabinet on October 4, sources in the party said. After the meeting at Punjab Bhavan, where AICC observer Harish Chaudhary was also present, both Channi and Sidhu left the meeting venue without talking to the media.

A day earlier Channi said he has spoken to Sidhu and invited him to have a chat and sort out differences, if any.

"Whoever is party President is head of the family. I had called him and told him that the party is supreme. I have spoken to him on phone and told him to let's sit, talk it out and resolve the issue," he had told the media here.

Days after the 'deadlock' between Channi and Sidhu over the appointments of the Director General of Police and Advocate General, besides re-induction of a 'tainted' legislator in the Cabinet, Sidhu, ahead of the meeting, indicated that he was ready to end the impasse.

He especially came from his hometown Patiala to meet Channi in Chandigarh.

Ahead of the meeting, Sidhu tweeted: "Chief Minister has invited me for talks will reciprocate by reaching Punjab Bhawan, Chandigarh at 3:00 PM today, he is welcome for any discussions !"

A day after his resignation as the Congress chief, Sidhu on September 29 said he will fight for truth till his last breath as the fight is for principles that he won't compromise with.

"I will fight for truth until my last breath," Sidhu had said in a video message posted on his Twitter handle.

"It is not a personal battle but a fight for principles. I won't compromise on principles," Sidhu had said categorically.

Without mincing words, he had said he would not accept tainted ministers being brought back into the newly constituted state cabinet led by Channi.

In the video message in Punjabi, the cricketer-turned-politician, who said his only religion is to make people's lives better, had said he had fought for justice and for Punjab's agenda.

Unhappy over the expansion, allocation of portfolios and appointments on crucial posts, including the Advocate General, Sidhu on September 28 resigned from his post after remaining at the helm for 71 days.

As his decision pushed the state Congress into deeper crisis, Sidhu, however, maintained that he would not be leaving the party.