Punjab Assembly polls: Deciding CM face neither in Sunil Jakhar's hands nor in mine, says Sidhu 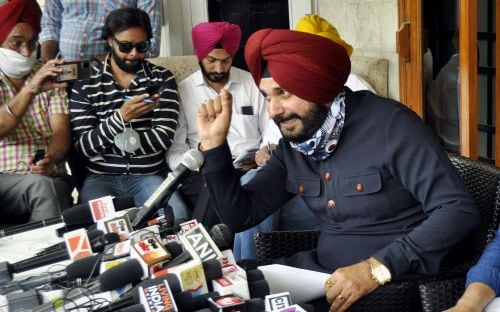 Amritsar: After former Punjab Congress chief Sunil Jakhar said that Chief Minister Charanjit Singh Channi should be given time to continue working as the CM face of Congress in upcoming state Assembly polls, state party chief Navjot Singh Sidhu said that it not in his or Jakhar's hands to decide as to who will be the CM face of the party in the state.

"It's up to Sunil Jakhar whatever he says, but it's not in his hand nor in mine. People will elect MLAs and then CM will be elected. We've to give people agenda, model," Sidhu said while speaking to media persons today in Amritsar.

Earlier in the day, Jakhar had said, "What they decide will be accepted by all. But I'm of opinion that Channi ji has been given the opportunity, he should be given time so that he continues working. People have seen his good work in four months."

His statement came after he stirred political reactions after claiming that 42 of 79 party MLAs wanted him to take over as the Punjab Chief Minister after Captain Amarinder Singh stepped down from the post while only two legislators favoured Channi.

This comes at a time when Congress is all set to announce its CM candidate for the upcoming polls in the state.

Amid speculation over the chief ministerial face of Congress for upcoming Punjab polls, Navjot Kaur Sidhu, wife of state Congress chief Navjot Singh Sidhu, has said that her husband is "a hero" and it does not matter whom the party chooses its face in the state for the polls.

Channi on Thursday informed that the name of the Congress chief ministerial candidate for upcoming state assembly elections will be announced on February 6.

Meanwhile, reacting on Shiromani Akali Dal leader Bikram Singh Majithia fighting polls from Amritsar East, which is the same as that of Sidhu, he said, "Our fight is not with him (Bikram Singh Majithia) but against the big bull (Sukhbir Singh Badal). Some thieves have gathered and are afraid that if Sidhu will come then they will be exposed."

Punjab will go to the polls on February 20. The counting of votes will take place on March 10. ANI