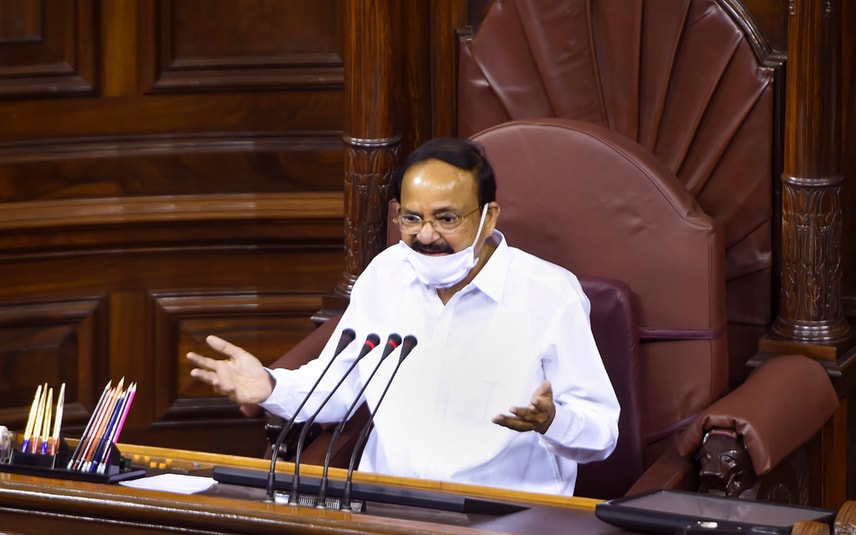 New Delhi: The proceedings of the Rajya Sabha were adjourned twice during the pre-lunch period on Wednesday as opposition members continued their protests over the suspension of 12 MPs.

The Upper House was first adjourned soon after it met for the day and then again at noon till 2 PM, after opposition members created uproar seeking revocation of the suspension of the MPs.

As the House met earlier, placard-carrying opposition MPs trooped into the well of the House and shouted slogans against the suspension.

Chairman M Venkaiah Naidu expressed dismay at their conduct, and said the suspended MPs have shown no remorse, and there was no question of revoking their suspension.

"It is sacrilege of the House, I have said (on the conduct of the 12 suspended MPs during the last session in August). There is no remorse by members who have really insulted the parliamentary system," he said.

Naidu ordered that nothing that the opposition MPs say would go on record but said their conduct in the Well of the House should be shown to the people of the country.

When the House again met at 12 PM, the members continued with the protests and Deputy Chairman Harivansh urged the members to allow the Question Hour to function.

Leader of the Opposition Mallikarjun Kharge sought to raise the issue of suspension but the Chair noted that Question Hour was on and nothing else could be raised.

However, opposition members raised uproar after Kharge was not allowed to raise the issue and the House was adjourned till 2 PM.

As the House met in the morning, Naidu said even after indulging in such unparliamentary behaviour the members did not express any remorse.

"Coming to the well of the House, climbing on the table, throwing papers, snatching papers from the minister and also challenging the Chair... doing everything which is unparliamentary, undemocratic and they have no remorse. What can we do?" Naidu asked.

He said placards should not be shown and brought into the House.

No sooner had Jose K Mani taken oath as member of the Upper House and listed official papers laid on the table of the House, MPs from Congress and other opposition parties trooped into the well of the House shouting slogans.

Kharge wanted to speak but couldn't be heard in the din.

On Tuesday, Kharge had said that the motion for suspension moved by Parliamentary Affairs Minister Pralhad Joshi was in gross violation of the rules and action was taken in the current Winter Session of Parliament for alleged "unruly" conduct in the last session.

As many as 12 opposition MPs were suspended from the Rajya Sabha on Monday for the entire Winter session of Parliament for their "unruly" conduct in the previous session in August, even as the Opposition termed the suspension as "undemocratic and in violation of all the Rules of Procedure" of the Upper House.