Protect environment for future generations: President Kovind in his farewell message to nation

President-elect Droupadi Murmu will be sworn in as the country's 15th President on Monday. 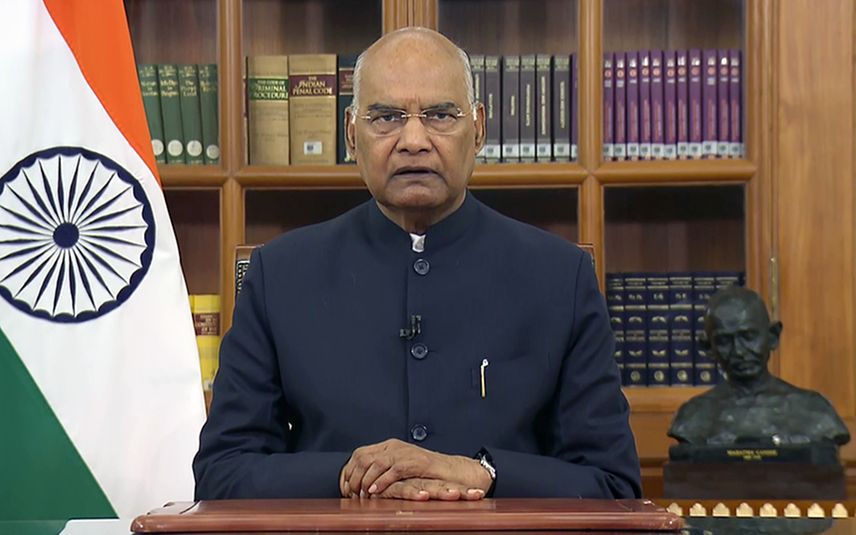 New Delhi: Mother nature is in deep agony and the climate crisis can endanger the very future of this planet, outgoing President Ram Nath Kovind said in his farewell address to the nation on Sunday as he appealed to all to protect the environment for the coming generations.

Emphasising that the country is getting equipped to make the 21st century "the century of India", Kovind highlighted the importance of healthcare and education and said these, along with economic reforms, would enable citizens to pursue happiness by discovering their potential.

President-elect Droupadi Murmu will be sworn in as the country's 15th President on Monday.

In his last televised address to the nation, Kovind said, "The pandemic has underlined the need to further improve the public healthcare infrastructure. I am glad that the government has accorded top priority to this task.

"Once education and healthcare are in place, economic reforms will let citizens find the best course for their lives, he said, adding that "I firmly believe that our country is getting equipped to make the 21st century, the century of India".

He said the National Education Policy will go a long way in making it possible for young Indians to connect with their heritage and also find their feet in the twenty-first century.

The president made a special mention of the threat to the environment and asked all citizens to take care of it for future generations.

"Mother Nature is in deep agony and the climate crisis can endanger the very future of this planet. We must take care of our environment, our land, air and water for the sake of our children.

"In our daily lives and routine choices, we must be more careful to protect our trees, rivers, seas and mountains as well as all other living beings. As the first citizen, if I have to give one advice to my fellow citizens, it has to be this," he added.

President Kovind also hailed the trinity of ideals of liberty, equality and fraternity, saying they must not be mistaken as abstractions beacause they ''are lofty, noble and uplifting''.

"Our history, not only of modern times but also from ancient times, reminds us that they are real; that they can be realised, and indeed have been realised in different eras.

"Our ancestors and founders of our modern nation exemplified the meaning of justice, liberty, equality and fraternity with hard work and an attitude of service. We only have to follow in their footsteps and keep walking," he said.

And what do such ideals mean for a common citizen today? Kovind asked.

"I believe the chief goal is to help them discover the joy of living. For that, first of all, their basic necessities must be taken care of," the president emphasised.

During his address, the president went down memory lane to highlight the inherent power of vibrant democratic institutions.

Kovind recalled his earlier days when the country had just achieved independence and said, "There was a fresh wave of energy to rebuild the country; there were new dreams. I too had a dream, that one day I would be able to participate in a meaningful way in this nation-building exercise".

"A young boy living in a mud house could not have any idea about the highest Constitutional office of the Republic. But it is a testament to the strength of India's democracy that it has created pathways to let each citizen take part in the shaping of our collective destiny.

"If that Ram Nath Kovind from village Paraunkh is addressing you today, it is solely thanks to the inherent power of our vibrant democratic institutions," he said.

In his farewell speech on the eve of his completing five-year tenure as the president, Kovind said the founders of our modern nation exemplified the meaning of justice, liberty, equality and fraternity with hard work and an attitude of service, and "we only have to follow in their footsteps and keep walking".

The president said the nation is working with the objective of providing better housing, and access to drinking water and electricity for every family.

"This change has been made possible by the momentum of development and good governance which knows no discrimination," he said.

Kovind said the formal map for the democratic path "we all have been navigating was drafted by the Constituent Assembly" and the Constitution they prepared, with invaluable contributions from each of them, has been our guiding beacon.

"Values enshrined in it have been part of the Indian ethos since time immemorial," the outgoing president said and quoted Dr Babasaheb Bhimrao Ambedkar's concluding remarks in the Constituent Assembly where he had pointed out the distinction between political and social democracy.

"What does social democracy mean? It means a way of life which recognises liberty, equality and fraternity as the principles of life.

"These principles of liberty, equality and fraternity are not to be treated as separate items in a trinity. They form a union of trinity in the sense that to divorce one from the other is to defeat the very purpose of democracy," Kovind quoted Ambedkar as having said.

President Kovind said in modern times, the glorious journey of the country commenced with the awakening of nationalist feelings during colonial rule and the launch of the freedom struggle.

"There were many uprisings across the country in the nineteenth century. The names of many of the heroes who brought hopes of new dawn have long been forgotten.

"Contributions of some of them have come to be appreciated only in recent times. Around the turn of the century, the various struggles were coming together, creating a new consciousness," he said.

When Gandhiji returned to the motherland in 1915, the nationalist fervour was gaining momentum, Kovind said, mentioning Gurudev Rabindranath Tagore, Babasaheb Bhimrao Ambedkar, Jawaharlal Nehru and Syama Prasad Mookerjee among others.

"From Tilak and Gokhale to Bhagat Singh and Netaji, from Jawaharlal Nehru, Sardar Patel and Shyama Prasad Mukherjee to Sarojini Naidu and Kamaladevi Chattopadhyay – nowhere in the history of humankind have so many great minds come together for a common cause," he said.

Expressing deep gratitude to all fellow citizens and elected representatives, Kovind said he has been inspired and energised by interactions with farmers and workers from small villages, teachers shaping young minds, artists enriching our legacy, scholars investigating various facets of our country and business people creating wealth for the nation.

He also mentioned doctors and nurses serving the people, scientists and engineers engaged in nation-building, judges and advocates contributing to the justice delivery system of the country and civil servants who run the administration smoothly

"'Our social workers actively connecting every social segment with development, preachers and masters of all sects who maintain the flow of spirituality in Indian society – you all have continuously helped me discharge my duties," he said.

"In short, I received full cooperation, support and blessings from all sections of society. I will especially cherish the occasions when I had an opportunity to meet our brave jawans of the armed forces, para-military forces and the police. Their patriotic zeal is as amazing, as it is inspiring," the president said.

Referring to his interaction with the Indian diaspora during his visits abroad, Kovind said he found their love and concern for the homeland very touching.

"All these re-affirm the belief that the nation is after all composed of its citizens; and with each of you striving to make India better and better, the nation's great future is secure," he said.

Kovind said that among the most memorable moments of his life has been visiting his home during his term and touching the feet of his teachers at Kanpur to seek their blessings.

"This year, the prime minister also honoured my village Paraunkh with his visit. This connection with our roots has been the essence of India. I would request the younger generation to continue this tradition of staying connected with their village or town, their schools and teachers," the president said.

Asserting that he has discharged his responsibilities to the best of his ability and has been conscious of being a successor to great icons like Dr Rajendra Prasad, Dr S Radhakrishnan and Dr APJ Abdul Kalam, Kovind said, "Still, whenever I was in doubt, I turned to Gandhiji and his famous talisman".

"His advice of recalling the face of the poorest man and asking myself if the step I am about to take will be of any use to him. At the risk of repeating myself, I will urge you to contemplate Gandhiji's life and teachings at least for a few minutes every day," he said. PTI