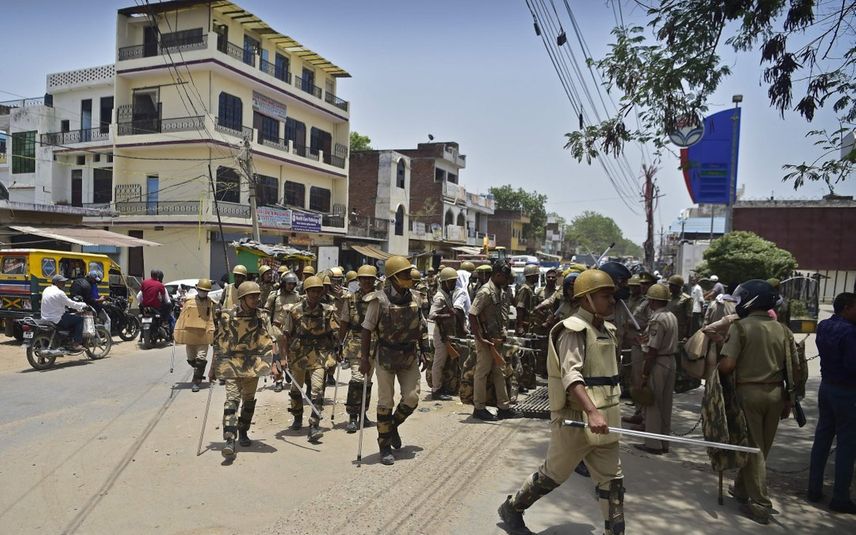 Lucknow/Kolkata/Ranchi: Over 400 people have been arrested so far in a clampdown on those involved in the violent protests on Friday in several states against the controversial remarks on Prophet Mohammad by two now-sacked BJP functionaries, with authorities in Uttar Pradesh razing "illegal" houses of the accused for the second day.

There were a few sporadic incidents of violence and protests, with a group of people attacking and damaging a local train at Bethuadahari railway station in West Bengal's Nadia district on Sunday evening.

Among those arrested, 304 were held in eight districts in Uttar Pradesh and 100 in Howrah and Murshidabad districts in West Bengal, while the Ranchi police registered 25 FIRs against "thousands" of people for the clashes that left two dead and scores of others injured in the Jharkhand capital, and stepped up security in other parts of the state also.

Political parties, including the Samajwadi Party, and activists have accused authorities of high-handedness in the aftermath of the protests. Senior Congress leader and former home minister P Chidambaram said the prime minister should have spoken and acted immediately after the offensive utterances.

Union Information and Broadcasting Minister Anurag Thakur, however, said that law and order is a state subject and they should take strict possible action against the rioters.

Leaders and organisations should not add fuel to the fire, he stressed.

Authorities had strengthened security and clamped prohibitory orders in many districts after people took to the streets following Friday prayers, indulged in stone-pelting and clashed with security personnel, demanding the arrest of Nupur Sharma and Naveen Kumar Jindal.

While Sharma was suspended by the BJP and Jindal expelled from the party amid backlash from many Islamic countries, several cases and court complaints continue to be filed against them and also against others in related cases of allegedly hurting religious sentiments in various parts of the country.

The Bhiwandi police in Maharashtra has now summoned Sharma to record a statement on Monday, while Jindal has also been summoned on June 15 in the case registered against them on a complaint lodged by a representative of the Raza Academy on May 30.

Earlier, the police in Thane asked Sharma to appear before them on June 22 while the Mumbai Police had summoned her on June 25.

In Uttar Pradesh, where Chief Minister Yogi Adityanath has vowed to act tough on rioters, Additional Director General of Police (Law and Order) Prashant Kumar said 13 cases have been registered and 304 people have been arrested in eight districts.

"91 persons have been arrested in Prayagraj, followed by 71 in Saharanpur, 51 in Hathras, 34 each in Ambedkar Nagar and Moradabad, 15 in Firozabad, six in Aligarh and two in Jalaun," he said.

In Prayagraj, where mobs went on a rampage, the civic body on Sunday demolished the house of the alleged mastermind of Friday's violence amid heavy police deployment.

Under Adityanath, the state administration has been cracking down on criminals and riot accused, seizing or razing their illegal properties

A day earlier, the properties of two others accused of rioting were demolished in Saharanpur where stone-pelting had taken place as well.

"Javed Ahmad's house -- JK Ashiyana -- is located in the Kareli area of Prayagraj. Police personnel and a JCB machine reached the Kareli police station around 10.30 am and demolition commenced around 1 pm.

"The house was built without getting its map passed by the PDA. For this, he was issued a notice on May 10 and was told to present his side on May 24. On the given date, neither Javed nor his lawyer turned up. No document was presented as well, and hence on May 25, demolition orders were issued," an official of Prayagraj Development Authority said.

Police had said on Saturday that Javed Ahmad, alias Pump, had been arrested.

Police staged a flag march in East Singhbhum and imposed prohibitory orders in adjoining Seraikela-Kharswan as a precautionary measure to prevent any communal flare-up, officials said.

Family members of Mohammad Mudassir Alam and Mohammad Sahil, who were fatally shot during Friday's clashes, claimed they were not a part of the protest procession.

In reply to queries regarding police firing, Ranchi Senior Superintendent of Police Surendra Kumar Jha , however said that the standard operating procedures were adhered to.

"Firing is the last resort. We followed all norms before resorting to firing, as the crowd was aggressive and uncontrollable. I don't want to talk much on this as the matter is under investigation," Jha said.

Ranjan said prohibitory orders under Section 144 have been lifted from six of the 12 police station areas.

In West Bengal's Bethuadahari, a large number of protestors put up a road blockade and when they were chased by the police, some of them entered a railway station and threw stones at a local train which was on a platform.

Train services on the Lalgola line have been affected due to the attack, police said, adding there was no immediate report of any casualty.

More than 100 people have been arrested in West Bengal's Howrah and Musrdidabad districts district for the violence since Friday while prohibitory orders under Section 144 of CrPc has been clamped in some areas and internet services suspended.

"The overall situation is peaceful at present as there have been no reports of any fresh incident in Howrah and Murshidabad districts. A total of 100 people have been arrested so far. Our force is on alert and any attempt to create disturbance will be dealt with strongly," a senior police officer told PTI over the phone.

In Kolkata, security was tightened in areas "considered sensitive" such as Park Circus, Kidderpore, Rajabazar and Mallickbazar.

An FIR has been lodged at Kanthi Police Station against Nupur Sharma, an officer said.

Meanwhile, the West Bengal Leader of Opposition (LoP), Suvendu Adhikari, was prevented by police from visiting violence-hit areas in Howrah, where several BJP offices were also targeted by mobs.

He was later allowed to proceed after a two-hour-long stand-off on the condition that he would go straight to Kolkata, without making any pit stop in violence-hit areas in the adjoining Howrah district.

Adhikari said he would move the court on Monday over being prevented from visiting the areas affected by the violent protest.

Upon reaching Kolkata, Adhikari straightaway went to the site of party colleague and state BJP chief Sukanta Majumdar's sit-in. Majumdar was arrested on Saturday afternoon when he was heading towards Howrah district and later released.

In Jammu and Kashmir, one person was arrested for allegedly stoking communal tension as curfew and strict restrictions under prohibitory orders remained in force in parts of Chenab valley.

The accused Aadil Gafoor Ganai was arrested from his house during an early morning raid on Sunday by police at his residence at Chinar Mohalla locality for allegedly delivering an inflammatory speech from Markazi Jamia Masjid Bhaderwah on June 9 during a protest rally against remarks on Prophet Mohammad.

On the basis of the provocative speech, police have registered a case under sections 295A (deliberate and malicious acts, intended to outrage religious feelings of any class by insulting its religion or religious beliefs) and 506 (Punishment for criminal intimidation) of the Indian Penal Code.

A police official said there was no untoward incident reported from anywhere in both Doda and Kishtwar districts.

“There was no relaxation in curfew in Bhaderwah town, while strict restrictions under section 144 Cr PC also continued in Gandoh, Thathri and Doda towns besides Kishtwar town. Similarly restrictions under prohibitory orders were lifted from Ramban district on Saturday,” the official said.

Prominent citizens of both the communities are actively engaged with police and efforts are on to normalise the situation, the official said. a complaint lodged by a representative of the Raza Academy on May 30, he said.

A peaceful protest was staged in Jammu at Gujjar Nagar, a Muslim-dominated locality, against Nupur Sharma, officials said.

In the national capital, two men have been arrested for allegedly disrupting communal harmony and holding the protest without permission in the Jama Masjid area.

The two were arrested on Saturday night and have been identified as Mohd Nadeem (43), resident of Jama Masjid area, and Faheem (37), resident of Turkman Gate area, the police said.

An investigation is on to identify other persons involved and footage from CCTVs is being scanned, Deputy Commissioner of Police (Central) Shweta Chauhan said.

The Delhi Police has registered an FIR against 31 people, including AIMIM chief Asaduddin Owaisi and controversial priest Yati Narsinghanand, and filed a separate case against Sharma for allegedly spreading hate and hurting religious sentiments. Sabha MP from Thiruvananthapuram said.

In UP's Bareilly, an FIR was registered at Premnagar police station against one Rehan on Saturday night on the complaint of local BJP member Shalini Johri for allegedly posting an inflammatory message on a social media platform with an edited picture of Nupur Sharma.

Another FIR has been lodged against one Kuldeep who sent an objectionable message about the Prophet to one Furkhan.

In Ballia, one Muhammad Yakub Ansari, a resident of Revati town, had arrested after he posted an “indecent and objectionable post” against Sharma on Facebook on Saturday, the police said.

A lawyer has also filed a complaint in the court of the chief judicial magistrate of Srinagar against Sharma and others for the alleged "blasphemous" remarks against Prophet Mohammad. PTI