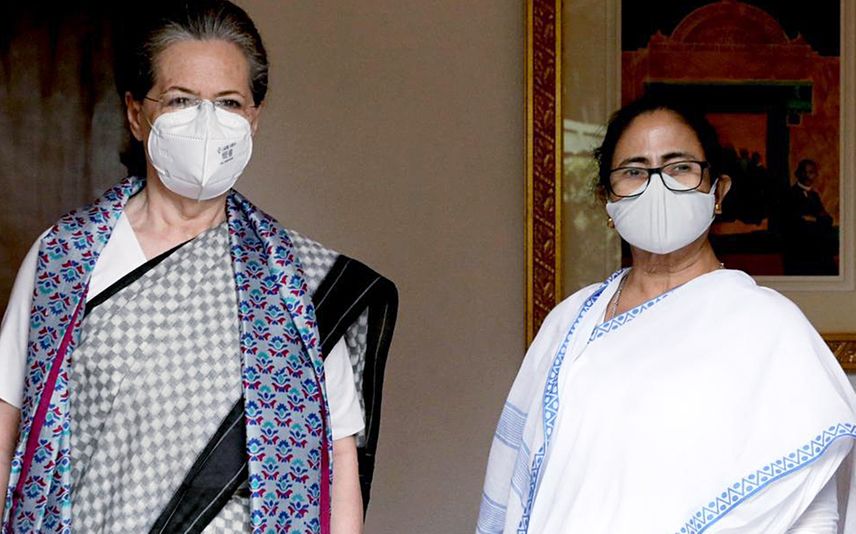 New Delhi: The polls to elect the president and the vice president may be over but the bitter aftertaste in the Opposition ranks is likely to linger with the schism between the Congress and the TMC widening and jibes at each other flowing thick and fast.

The defeat of the Opposition's candidates in these polls were on expected lines, but what surprised many was that the bid for unity had in effect exposed the political fault lines in the Opposition ranks.

The two major Opposition forces trading barbs and the Trinamool Congress abstaining from the vice presidential poll do not augur well for the Opposition moving towards the 2024 parliamentary elections and are likely to dent their electoral prospects, analysts say.

While the Congress and the TMC were seen vying for credit in forging a consensus on a joint presidential candidate, their differences came out in the open during the vice presidential election.

Congress veteran Margaret Alva was fielded by the Opposition for the vice presidential poll against the ruling NDA's Jagdeep Dhankhar, but the Mamata Banerjee-led Trinamool Congress announced it would abstain from the election as there was no proper consultation before deciding on the candidate.

Alva's first reaction was stern, saying this was not the time for 'whataboutery', ego or anger, but the time for courage, leadership and unity. However, she continued to express hope that Banerjee would come around and support her, but it was not to be.

And with a comprehensive defeat, the knives were out in public with Congress general secretary Jairam Ramesh going public with his disappointment with the TMC.

Margaret Alva ran a spirited campaign and it was too bad the TMC didn't support her, he said on Twitter.

India will have to wait for its first woman vice president, he added.

Alva herself took a veiled jibe at the TMC, saying this election was an opportunity for the opposition to work together, to leave the past behind and build trust amongst themselves.

"Unfortunately, some opposition parties chose to directly or indirectly support the BJP, in an attempt to derail the idea of a united opposition. It is my belief that by doing so, these parties and their leaders have damaged their own credibility," Alva said in what many saw as scathing indictment of the Mamata Banerjee-led party.

"This election is over. The battle for protecting our Constitution, strengthening our democracy & restoring the dignity of Parliament, will continue," Alva signed off.

TMC leader Saket Gokhale told a TV channel that what it faced with Dhankhar as the Governor in West Bengal should not be used for belittling any party or a party sitting at a higher table than another one.

The Congress is not TMC's ally and they were like-minded parties, he noted.

"Congress along with the CPM fought against TMC in West Bengal. The reason we decided to abstain is the manner in which the Opposition candidate was decided," he said after the vice presidential poll.

It was problems galore for Opposition parties as they not just grappled with infighting but were also hit by cross-voting in the polls. Also, Opposition parties such as the Jharkhand Mukti Morcha sided with the NDA's choice in the presidential poll instead of going with the Opposition candidate Yashwant Sinha.

In the vice presidential poll, Sisir Adhikari and his son Dibyendu Adhikari voted despite their party TMC deciding to abstain.

NDA candidates Murmu and Dhankhar sailed through comfortably in the presidential and vice presidential polls with the Opposition falling short of even the expected numbers.

Political observer Rasheed Kidwai said the results of the polls were a foregone conclusion but the lack of unity among Opposition ranks has made the road to 2024 more difficult for the parties looking to challenge the ruling NDA.

"It is the fault of both parties as it takes two to tango. The Congress must recognize that the Mamata Banerjee-led party is their biggest force and similarly the TMC needs to understand that the Congress remains the principal Opposition party in the country," he said.

Public comments of criticism from both sides did not help and actually widened the differences, he noted.

Their unity would not have made a difference to the result but would have sent a message for the 2024 polls, Pandey told PTI.

"It shows that neither of them is concerned about unity but only concerned with scoring a point," he added.

With 2024 fast-approaching, the clock is ticking for the Opposition to get its act together.