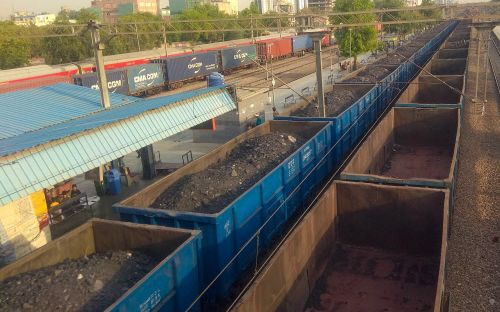 New Delhi: To counter the electricity crisis in the country, the Railways has deployed 86 per cent of its open wagons to transport coal to various power plants in the country, sources said on Wednesday.

Out of the 1,31,403 BOXN or open wagons in its fleet, the Railways is using 1,13,880 for coal transportation, as part of a plan formulated by the national transporter in consultation with the ministries of coal and power, they said.

Daily, the Railways is loading an average of around 28,470 wagons with coal to meet the demand from power plants.

A coal train usually gets up to 84 wagons.

The Railways has also used an innovative method of using long-haul trains -- running three to five trains together -- at 122 locations in states like Jharkhand, Odisha, Chhattisgarh and Madhya Pradesh to expedite transportation.

In marathon meetings with top officials of the three ministries, around 18 key points have been identified in the transportation of coal.

This includes the detention of rakes during coal loading and unloading which is taking more than 10 days in some cases, sources said.

The situation, sources say is such that the Railways is even put into action around 40-50 damaged wagons in operation to move coal.

Officials said to expedite the movement of coal rakes, the Railways has also increased the operating duration of rakes by 2,500 km.

This means that the rakes which were earlier treated for wear and tear after every 7,500 km are now sent to the garage after 10,000 km, giving them more running time.

The trains which have a loading capacity of around 71 MT are now carrying at least a tonne of extra load.

Sources indicate that this focus on coal is affecting the transportation of steel and aluminium.

The steel industry is also facing a shortage of BOXN rakes for the movement of imported coking coal from ports like Paradip and Dharma to steel plants, they said.

Of the 653 MT of coal transported by the railways, around 83 per cent, or around 540.4 MT, was to thermal power plants. The remaining was to foundries of different manufacturing units.

According to railway ministry data, nearly 95 per cent of coal transported by the railways comes from Coal India's reserves while the remaining is imported.

"With our focus on ensuring that we transport coal to power plants to ensure that there are no blackouts in the country, loading of other commodities are bound to suffer.

"This has affected passenger trains as well. It is a matter of priority and a calculated decision has been taken," said an official in the ministry. PTI