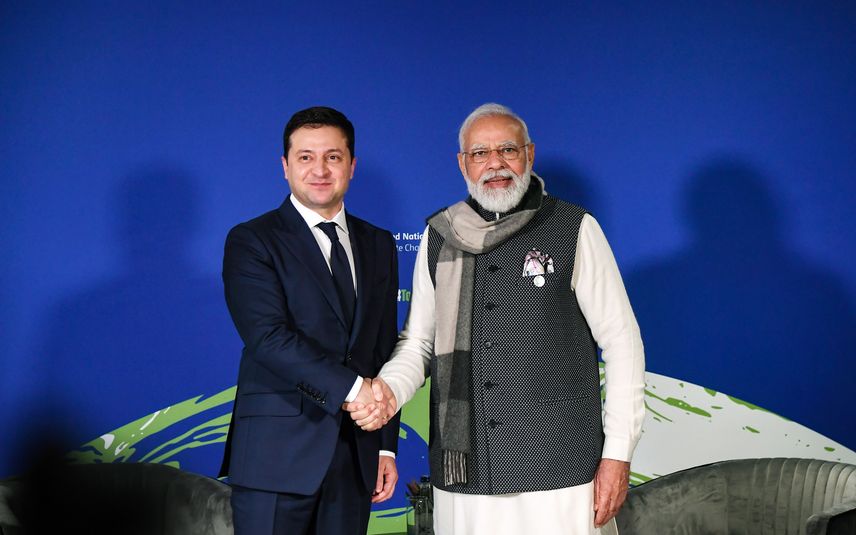 New Delhi: Prime Minister Narendra Modi on Monday spoke to Ukrainian President Volodymyr Zelenskyy and sought his support for the evacuation of Indians stuck in northeastern Ukraine's Sumy city, while reiterating his call for an immediate cessation of violence to defuse the ongoing conflict in the eastern European nation.

Around 700 Indian students are stranded in Sumy amid intense fighting between Russian and Ukrainian troops and India has been urging both sides to create a "humanitarian corridor" for their safe evacuation.

In his nearly 35-minute phone conversation with Zelenskyy, Modi sought continued support from the government of Ukraine in ongoing efforts for evacuation of Indian nationals from Sumy, official sources said.

A statement issued by the Prime Minister's Office (PMO) said Modi expressed "deep concern for safety and security of Indian students still in Ukraine and emphasised the need for their quick and safe evacuation."

The Modi-Zelenskyy talks, the second between the two in the last nine days, came on a day Russian authorities said they would start a ceasefire on Monday and open "humanitarian corridors" in key Ukrainian cities including Kyiv, Kharkiv and Sumy.

Russian news agency Interfax, quoting local authorities, reported that Russia has informed the United Nations, Organisation for Security and Co-operation in Europe (OSCE) and the International Committee of the Red Cross (ICRC) about opening humanitarian corridors in Kyiv, Mariupol, Kharkiv and Sumy.

In a tweet, Zelenskyy said he informed Modi about how Ukraine is "countering Russian aggression".

"Informed Indian Prime Minister @narendramodi about Ukraine countering Russian aggression. India appreciates the assistance to its citizens during the war and Ukraine's commitment to direct peaceful dialogue at the highest level," the Ukrainian president said.

"Grateful for the support to the Ukrainian people," he added.

The statement by the PMO said Zelenskyy briefed Modi in detail about the "conflict situation" and the ongoing negotiations between Ukraine and Russia.

It said the prime minister expressed "deep concern" about the ongoing conflict and resultant humanitarian crisis.

"The prime minister reiterated his call for immediate cessation of violence and noted that India has always stood for peaceful resolution of issues and direct dialogue between the two parties," it said.

"The prime minister thanked Ukrainian authorities for their facilitation in evacuating more than 20,000 Indian citizens from Ukraine," the PMO said.

The sources said the two leaders discussed the evolving situation in Ukraine and Modi appreciated the continuing "direct dialogue" between Russia and Ukraine.

In the last few days, India has been focusing on the evacuation of its students from Sumy.

On Saturday morning, Indian students had posted a video saying they have decided to leave for the Russian border and that the Indian government and the embassy in Ukraine will be responsible if anything happens to them.

Following the video, the Indian embassy in Ukraine requested them not to endanger their lives and conveyed that it will leave no stone unturned to safely evacuate them.

The students relented following the assurance.

The Indian embassy in Ukraine on Sunday said a team from the mission has been stationed in Poltava city to coordinate the safe passage of Indian students in Sumy to Western borders via Poltava.