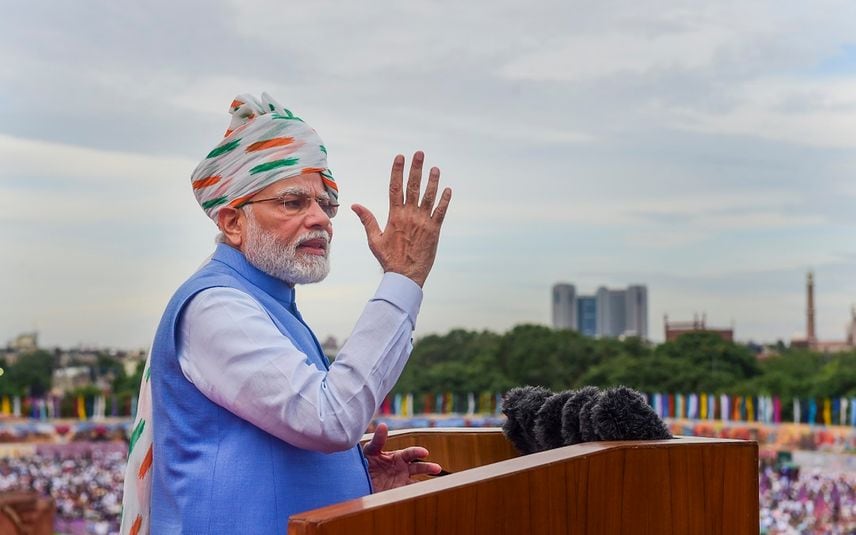 Prime Minister Narendra Modi addresses the nation from the ramparts of the Red Fort . Photo: PTI

New Delhi: On the occasion of 76th Independence Day, Prime Minister Narendra Modi went old school in his customary address to the countrymen where he used paper notes for his speech in the national capital on Monday.

It was his ninth address from the ramparts of the Red Fort.

The teleprompter was sidelined by the nation's chief as he began his speech by congratulating the countrymen on the completion of 75 years of independence which is being celebrated in the country under the banner of Azadi Ka Amrit Mahotsav.

"During our freedom struggle, there was not one year where our freedom fighters did not face brutality and cruelty. Today is the day when, as we pay them our respects, we need to remember their vision and dream for India," PM Modi said while addressing the nation from the Red Fort for the ninth consecutive time.

"Our country is grateful to Gandhiji, Bhagat Singh, Rajguru, Ramprasad Bismil, Rani Laxmi Bai, Subash Chandra Bose, and all other freedom fighters who shook the foundations of the British Empire. We salute not only those who fought for freedom but also the architects of free India such as Jawaharlal Nehru, Ram Manohar Lohia and Sardar Vallabhai Patel, amongst the many others," PM Modi said.

The Prime Minister also said that India has been home to great thinkers like Vivekanand, Aurobindo and Rabindranath Tagore. "Our heroes like Rajendra Prasad, Jawaharlal Nehru, Shyama Prasad Mukherjee, Lal Bahadur Shastri fought for our independence and moulded our country," he said.

Addressing further on this historic day, the Prime Minister said that Adivasi freedom fighters such as Birsa Munda, Tirot Singh and Alluri Sitarama Raju played a pivotal role in keeping the freedom struggle alive in every corner of India.

PM Modi also recalled the contributions of the women freedom fighters of India. "Every India is filled with pride when they remember the strength of the women of India, be it Rani Laxmibai, Jhalkari Bai, Chennamma, Begun Hazrat Maha," PM Modi said.

A multi-layered security cover along with Facial Recognition System cameras have been installed at each entry/exit point at the fort. Security personnel also deployed trained catchers to ensure that the premises remain monkey-free during the day. As many as 231 regular kite-flyers from the walled city area were roped in by the police to ensure a clear sky for about three hours on the morning of August 15.