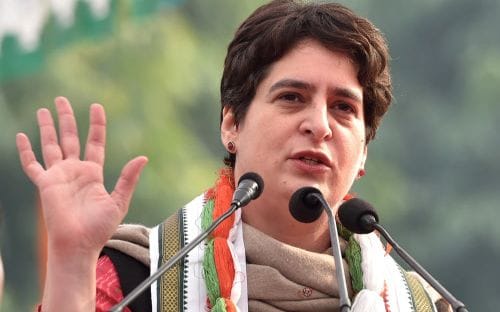 Mahoba (UP): Congress general secretary Priyanka Gandhi Vadra on Saturday attacked PM Narendra Modi, saying he flies in an aircraft worth Rs 8,000 crore to address a rally but can't waive debt of farmers.

Addressing her party's "Pratigya Rally" in this Bundelkhand district, she also promised debt waiver for farmers and free gas cylinders to women if the Congress comes to power in next year's Uttar Pradesh Assembly polls.

Targeting the PM, she accused him of doing nothing for farmers.

"Do you know the income of PM's big industrialist friends? They earn Rs 10,000 crore daily and you are earning Rs 27 a day, and this government is doing nothing for you, she alleged.

"Do you know the cost of the aircraft used by him? It is Rs 8,000 crore. He comes here to give a speech but your income is not raised. He comes in that aircraft but cannot waive debt of farmers," Priyanka said apparently referring to the PM's recent visit to Mahoba.

If they have money to buy aircrafts, then why not for you, she asked.

"If the Congress government is formed in Uttar Pradesh, then the entire loan of farmers will be waived and women will be given three domestic gas cylinders free of cost in a year," she added.

On promises made by the Congress if it comes to power in the state, she said a Bundelkhand development board having its own budget will be set up while promising a policy for mandis, industry and tourism.

Priyanka, who recently visited the region to meet families of the farmers who died in queues for fertilisers, said mounting debt on them has added on to their woes.

Even the fertilizer distribution system here is not working properly, she claimed.

Promising to deal with the stray cattle menace, she regretted that this problem is yet to be recognised by the government.

This problem existed in 2019 but nothing has been done to redress it, she said.

She also recalled the migration after the coronavirus outbreak, saying when her party arranged buses for people, the government did not take help.

"Now, when they have meetings, they bring crowd in buses. When your brothers and sisters were walking back home, where was this government? Where were the buses," she asked.

She further accused UP Chief Minister Yogi Adityanath and PM Modi of indulging in false publicity.

During the foundation laying ceremony of an airport in Noida's Jewar, its advertisement carried a picture of a Chinese airport without caring for truth, she said.

Stressing that the people of Bundelkhand have the right over the resources in the region, she accused the PM and Adityanath of betraying them, alleging that the government has no plan for the development of the area.

Priyanka also cited various works done by her party's governments in the past, stressing that the Congress is answerable to people and its intention is honest.

"You have seen the BJP, they made false promises, SP looted and the BSP did nothing. Their intention has not been clear," she added.

Congress leadership must be held accountable for the defeat: MA Baby