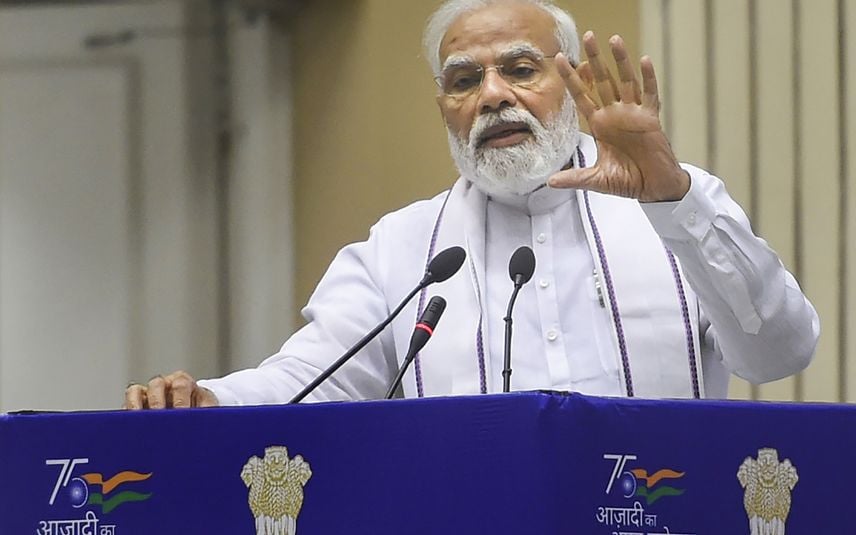 New Delhi: Prime Minister Narendra Modi on Saturday made a strong pitch for use of local languages in courts to make the common man feel connected to the justice system, and also said he has set up a group to examine having simplified version of laws as well that is easily understood by the masses.

In remarks that came before Modi's call at a conference, Chief Justice of India N V Ramana also said the time has come for the legal system to introduce local languages in courts. The CJI later told a press meet reforms such as introduction of local languages in courts cannot happen in a day, and these things take time due to logistical difficulties or other hurdles.

The remarks by Modi and the CJI against the backdrop of a debate over using regional language in judicial proceedings came in their speeches at the inaugural session of the joint conference of chief ministers and chief justices of high courts. The event held after a gap of six years also saw the CJI asserting one should be mindful of 'Lakshman Rekha' while discharging duty, noting the Constitution provides separation of power among the three organs of the state.

Modi appealed to chief ministers and chief justices of high courts to give priority to cases related to undertrial prisoners languishing in jails and release them, as per law, based on human sensitivities, adding judicial reform is not merely a policy matter. He also urged chief ministers to repeal outdated laws to make delivery of justice easier.

In his address, the CJI minced no words while terming governments as the "biggest litigants", accounting for nearly 50 per cent of pending cases, and said the "docket explosion" is due to non-performance of various wings of the executive and the legislature not realising its full potential.

While dealing with the reasons for docket explosion, the CJI referred to a growing number of contempt cases arising out of defiance of judicial orders by the executive, and said that "deliberate inactions by governments, despite judicial pronouncements, are not good for the health of democracy".

Modi said he had constituted a group to examine the possibility whether laws can be drafted in legal language as well as in terms easily understood by the common man.

“I have set up a group that is examining whether both versions can be passed by the assembly or parliament."

He said it is in practice in various countries and both the formats are considered as legally acceptable.

“Even our scriptures state that justice is the basis of good governance. It is for this reason that justice should be linked to the people, it should be in the language. Unless the common man understands the basis of justice, for him there will be no difference between justice and executive order,” the prime minister said.

Modi told the assembled audience that as India celebrates the 75th anniversary of Independence, focus should be on creation of a judicial system where justice is easily available, is quick and for everyone.

On the issue of court proceedings, Modi said, "We need to encourage local languages in courts. This will not only increase the confidence of common citizens in the justice system but they will feel more connected to it."

Before the prime minister spoke, the CJI said there was a need for the legal system to introduce local languages in courts.

Referring to the CJI's remarks, Modi said newspapers have got a positive headline.

Justice Ramana said the practice of law before Constitutional courts should be based on one's intelligence and understanding of law, and not mere proficiency in language.

"The judiciary, as well as every other institution of our democracy, must mirror the social and geographical diversity of the country. I am receiving many representations for introducing local languages in proceedings before high courts," he said.

"I think the time has come now to revisit the demand and take it to a logical conclusion. The practice of law before Constitutional courts should be based on one's intelligence and understanding of law and not mere proficiency in language."

Responding to a query at the joint press conference with the Law Minister Kiren Rijiju, the CJI said there are several hurdles and bottlenecks or hiccups in implementation of regional language in court proceedings.

“Sometimes, some of the judges are not familiar with the local languages. Always, the Chief Justice will be from outside. Senior-most judges sometimes are also from outside,” Justice Ramana said.

In his address, the CJI also said he has been a strong proponent of “Indianisation of the justice delivery system”.

"By Indianisation, I mean increasing accessibility by moulding the system to suit the needs and sensibilities of the Indian population. It is a multi-dimensional concept. It calls for inclusivity, providing access to justice, removal of language barriers, reforms in practice and procedure, development of infrastructure, filling up of vacancies, augmenting the strength of the judiciary and so on."

On the issue of outdated laws, Modi said in 2015, the Centre had identified about 1,800 laws which had become irrelevant. "Out of these, 1,450 such laws of the Centre were abolished. But, only 75 such laws have been abolished by the states."

The prime minister emphasised that the government is working hard to reduce delay in justice delivery and efforts are on for increasing judicial strength and improving judicial infrastructure.

The CJI on his part said time has come to move from ad-hoc committees to a more streamlined, accountable and organised structure by creating a National Judicial Infrastructure Authority for the standardization and improvement of judicial infrastructure which currently needs urgent attention.

He dispelled the apprehensions that the proposed body aims at usurping the powers of any government and shared that the Authority would have representation from all the stake-holders, including the representatives of the central and state governments.

At the news conference, the CJI said the Executive and the Judiciary have agreed for state level judicial infrastructure authorities, instead of a national level body.

He said the chief ministers were largely of the view that instead of a national body, state level special purpose vehicle should be set up with political representation in them. The chief ministers or their nominee would be part of such a set up

Amid protests, govt raises upper age limit to 23 for recruitment under ...

We've condemned the offensive comments made by BJP functionaries, we speak ...