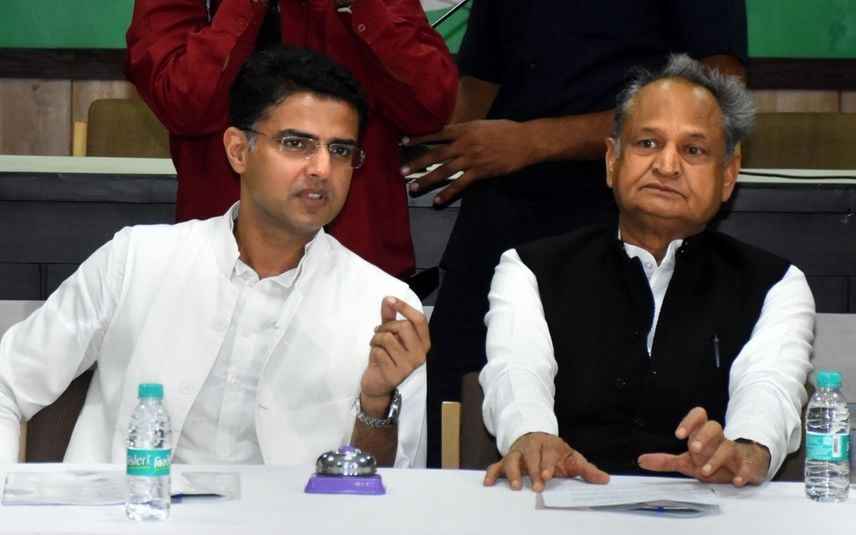 Pilot pushed for action by the party against Rajasthan leaders involved in a show of strength for Gehlot in September, boycotting a Congress Legislature Party (CLP) meeting that might have paved the way for his own appointment as CM.

He also indicated that he expected the Congress leadership now to call another CLP meeting.

Pilot's remarks on the “praise” for Gehlot – which he called an “interesting development” that should not be taken lightly – signalled the resumption of hostilities in the party's Rajasthan unit.

Hours later, Gehlot urged party leaders to “maintain discipline" and refrain from making “statements”. Answering questions from a reporter, he said the focus should be on winning the next assembly polls.

Pilot, who led a rebellion in 2020 against the CM, targeted the veteran leader by referring to Tuesday's event at Mangarh Dham in Banswara district, where Gehlot shared the dais with Modi. The leaders there paid tribute to the 1,500 tribal people believed killed in an uprising against the British in 1913.

“The PM praised the chief minister and this is an interesting development because the prime minister had praised Ghulam Nabi Azad in the same manner in the House in Parliament. And we all have seen what circumstances were created after that,” Pilot told reporters at his home.

The reference was to Azad quitting the Congress and later forming his own party.

“So it is an interesting development that the PM has praised the CM, and it should not be taken lightly,” he said.

Indirectly, the former Rajasthan Congress chief also called for action by the All India Congress Committee (AICC) against those involved in boycotting the CLP meeting in Jaipur.

Gehlot supporters had wanted him or a loyalist to continue as chief minister, amid the possibility that he would be elevated to the post of the party's national president and Pilot might take his place in the state.

The CM's supporters had kept away from the CLP meeting, where the MLAs were expected to pass a one-line resolution giving the party high command the right to pick the next CM. Instead, the MLAs held a parallel meeting and said they have handed in their resignations.

Pilot said only 13 months are left now for the assembly elections and the AICC would soon take any decision it needs to -- like calling another CLP meet.

He also suggested that the party will soon act against those who were given notices by the AICC for the indiscipline in September.

He recalled that AICC general secretary (organisation) K C Venugopal had then said a decision will be taken soon on Rajasthan, a reference to the chief minister's post.

“The time has come to end the state of indecision in Rajasthan and action will take place soon,” he added.

Recalling the scuttling of the CLP meeting in Jaipur, Pilot said the chief minister had apologized to the party and former party president Sonia Gandhi over it. “Ajay Maken and Mallikarjun Kharge who came as observers also took it seriously,” he added.

“The AICC considered it a matter of indiscipline and issued notices to three people,” he reminded, adding that they have sent in their replies.

“I believe that Congress is an old and disciplined party and party discipline is applicable to all, no matter how big an individual may be,” he said.

Pilot said it cannot happen that the party considers a development as indiscipline, serves notices and seeks replies but no decision is taken.

“I believe the decision will be taken soon,” he said. Earlier, Pilot loyalist and minister Rajendra Gudha had said the party high command should convene a CLP meeting to decide who should be the CM, and urged action against the three leaders who were served notices.

When asked about the possibility of changes in the state, the Congress leader said that it is for the party to give anyone any position or responsibility.

During the Mangarh event on Tuesday, Modi had called Gehlot the senior-most chief minister in the fraternity of CMs when he himself headed Gujarat government.

The PM said Gehlot was one of the senior-most chief ministers even today. Pilot said the prime minister was expected to declare Mangarh Dham a national monument but this did not happen, perhaps because the state has a Congress government.

Modi also did not declare the Rajasthan's Eastern Rajasthan Canal Project (ERCP) a national project despite a “commitment” given earlier, he added.