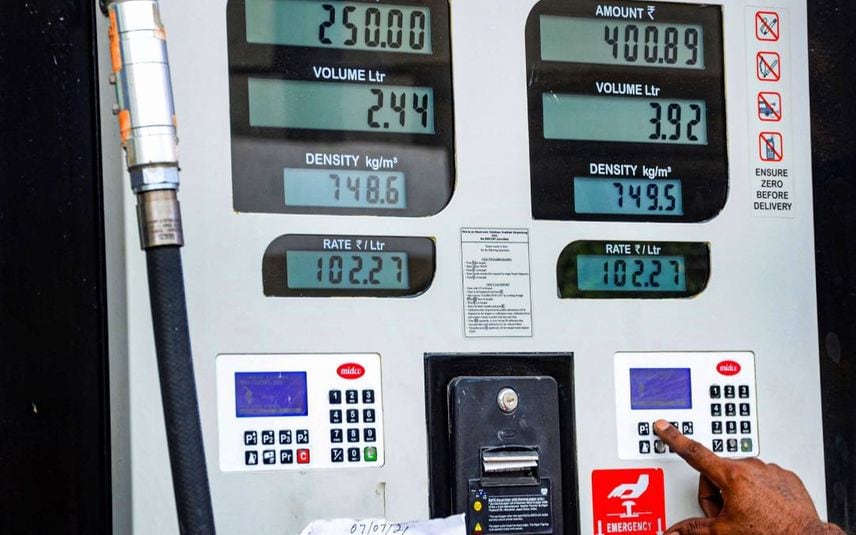 New Delhi: Sharp rise in prices of essential commodities over the past few months and the latest burden of steep hike in fuel rates have made life difficult for almost every section of the society across the country, as people say they are finding it hard to manage their household budget.

While the prices of vegetables and several other food items have gone through the roof, the rates of petrol and diesel have increased by about Rs 10 per litre each in the past one month. Besides, the prices of other petroleum products, including cooking gas, have also witnessed a rise in the past few days, adding to the woes of a household.

“The daily hike in fuel prices has made our life difficult. An LPG cylinder now costs around Rs 1,000, while prices of other commodities, including fruits, vegetables, and cooking oil, have sharply increased,” said Anudeep Kaur Goraya, a homemaker from Phagwara in Punjab.

Ompal Singh, a businessman from Haryana's Hisar who runs a shop in the auto market, said the rising inflation has also hit small businesses and traders.

The rising prices have hit almost everyone, either it be a milkman from Madhya Pradesh or a fish vendor from Kerala.

Kallu Ram (50), a milkman from Bhopal, said the high petrol price has made a big dent in his savings. “I use a bike to deliver milk to my customers. Now, I have to spend Rs 160 per day on petrol as against Rs 100 a few months ago. I want the price of petrol to be reduced,” said Ram.

Abdul Rahiman, a fish vendor in Kerala's Kozhikode who uses a two-wheeler for his business, said his daily petrol bill has gone up to Rs 250 which was Rs 150 till last month.

"I drive 23km from Perumanna to Puthiyappa fishing harbour in the morning and gather a variety of fishes in the container fitted on my bike. I take a round through Puthiyara, Pottemnal, Chevayur, and Chevarambalam, and return home by 2pm. Now, I have to spend Rs 100 more on petrol every day," he said.

Baldev Chand, a retired government employee from Chandigarh, said the price rise has adversely hit the family's budget. “A good part of my pension was already being consumed by the medicines that me and my wife have to take. Now, the rising prices of essential commodities have forced us to cut down on all non-essential expenses,” he said.

In Delhi's Mayur Vihar-1, Pradeep Kushwaha, a vegetable seller, said the hike in fuel prices is making vegetables costlier in the national capital. "Transportation cost has gone up by 10-15% due to steep hike in the prices of petrol, diesel and CNG. It is causing a ripple effect on vegetable prices," Kushwaha said.

The steep hike in CNG prices (about Rs 10 per kg in the past one month) has also prompted auto and cab drivers to threaten an indefinite strike from April 18.

Rajendra Soni, General Secretary of Delhi Auto-rickshaw Sangh, said, "CNG is now sold at over Rs 69 per kg. We demand that the government should provide Rs 35 per kg subsidy on CNG so that we can survive. We will go on an indefinite strike from April 18 if our demand is not met," Soni said.

Rising petrol prices have squeezed the income of Anand Vaghela, a contractual worker with a public sector firm in Ahmedabad. Vaghela, who travels around 30 kilometres daily on his two-wheeler, says he is not able to save a single penny.

"Not just petrol, prices of almost everything have increased in the past few months. As a result, I am unable to manage my household budget," says Vaghela, who lives in a rented apartment along with his wife and two children.

Similarly, Rahul Desai, a marketing professional from South Goa, claimed that his travel expense has really gone up. “Petrol is available at Rs 105 per litre in Goa. I used to spend Rs 3,000 to fill my car's fuel tank some four months ago, but now I have to shell out more than Rs 4,000,” he said.

In Chhattisgarh's capital Raipur, Kamini Patel who sells vegetables at a market in the city, says the rise in fuel prices has affected both the consumers and vendors.

“Earlier I used to earn up to Rs 1,500 daily, but my earning has come down below Rs 1,000 in the past few days as people are reluctant to buy vegetables at higher rates,” she said.

An elderly couple who runs a small roadside eatery in Bengaluru said the rise in prices of edible oil and domestic gas have impacted them a lot.

"We want to increase the rates of food items, but we fear losing some customers if we do so. These days we are not making profits," the couple said.

G V Raju, who runs a fast food joint in Hyderabad, said the price rise has hit the common man as well as small businessmen hard.

"The prices of fuel, vegetables, chicken, edible oil and many other items have increased substantially. But, I cannot hike the prices of food items I sell as I may lose customers. So, I am not earning any profit these days," he said.

Hotels and restaurants, reeling under losses on account of the COVID-19 pandemic, said the hike in prices of LPG cylinders and other commodities has dealt a fresh blow to their business.

“Prices of commercial LPG cylinders have gone up, so have the rates of all the essential commodities. It has led to an overall cost increase by 20 per cent. Restaurants are unable to hike prices of items fearing they might lose customers,” Hotel and Restaurant Association of Eastern India president Sudesh Poddar said.

Deepak Sahijwala, a financial consultant from Mumbai, said, “High fuel prices are here to stay as long as the Ukraine crisis continues. For India, the worry is the high inflation that becomes a consequence. The only solution for the government is to bring fuel under the GST. This will substantially reduce prices at the retail level.”

After almost a four-month hiatus, the oil marketing companies increased the prices of petrol and diesel by 80 paise a litre each on March 21, and since then they have revised the rates several times.