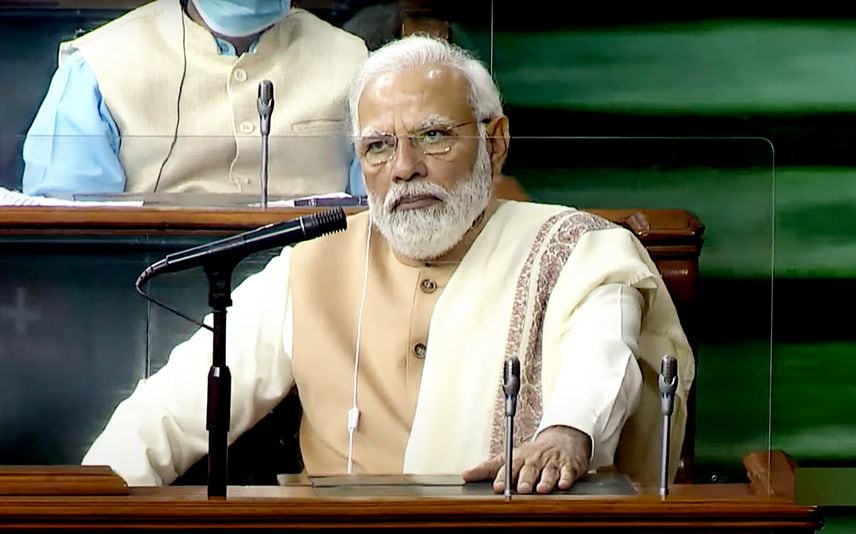 New Delhi: The Monsoon session of Parliament got off to a stormy start on Monday leading to adjournment of the two Houses without transacting much business following an opposition uproar over issues ranging from price rise to the Agnipath scheme.

The uproar broke out even as Prime Minister Narendra Modi urged MPs before the start of the parliamentary proceedings to make the session as productive as possible and called for debate, criticism and analysis for positive contribution to policies and decisions. In a lighter vein, he remarked that in Delhi rains have begun, but the heat outside is not reducing and wondered whether the heat will come down inside Parliament.

Presiding over his last session as Chairman of the Rajya Sabha, M Venkaiah Naidu also urged MPs to be "different and better" than they were in the last five years when 57 per cent of House sittings were partly or fully disrupted. Naidu's five-year term as Vice President and Rajya Sabha Chairman ends on August 10.

Speaking to reporters, Modi said Parliament functions and takes best decisions with everyone's 'prayaas' (efforts) and urged parliamentarians to make full use of this session in national interest.

"We always consider the House an efficient medium of dialogue, a pilgrimage place. Where there is dialogue with an open mind, there are fierce debates if needed, there is also criticism and by very good analysis of things a very positive contribution can be made to policies and decisions," the prime minister added.

He urged all MPs to undertake deep thinking and discussion, and make the House as productive and fruitful as possible.

Subject to exigencies of government business, the Monsoon Session will conclude on August 12.

The morning session of the Lok Sabha was adjourned to allow members to vote in the presidential election even as opposition members tried to raise some issues.

In the Rajya Sabha, slogan-shouting Congress members trooped to the Well of the House raising issues relating to price rise and GST as soon as Naidu read out the obituary references.

"As some people have come determined not to allow the House to function and also enable members to go and vote in the Presidential election, I am adjourning the House for the day," Naidu said.

As opposition members raised slogans, Lok Sabha Speaker Om Birla said elections in India are celebrated as a "festival" and since the Presidential polls was underway, it should also be celebrated.

The Speaker said members should participate in the "festival" and adjourned the House till 2 pm.

Besides Modi, Defence Minister Rajnath Singh, Home Minister Amit Shah and Congress President Sonia Gandhi were among those present in the Lok Sabha.

As the Lok Sabha re-convened at 2 pm, members of Left parties were in the well of the House waving placards protesting rising inflation while Congress leader Adhir Ranjan Chowdhury tried to raise some issue.

Earlier in the day, Chowdhury said the opposition wanted to raise issues such as price rise and the Agnipath scheme, a new scheme for recruitment of soldiers.

BJP member Rajendra Agarwal, who was in the chair, allowed the laying of parliamentary papers on the table of the House. Law Minister Kiren Rijiju introduced the Family Courts (Amendment) Bill.

As the opposition uproar continued, Agarwal adjourned the proceedings for the day.

Outside Parliament, Modi also urged MPs to remember every moment those who spent their youth, their lives for freedom and those who embraced martyrdom for it.

"Keeping their dreams in mind, and when August 15 is before us, then the House should be utilised most positively. This is my request," Modi said.

"This period is very important. It is the period of 'Azadi ka Amrit Mahotsav'. August 15 has a special significance and for the coming 25 years, when the country will celebrate its centenary, then how our journey of 25 years is, how fast we move forward, how many new heights we scale, it is a period for making such resolutions," Modi said.

"Giving direction to the country by being devoted to those resolutions, ensuring that the House leads the country, all the members of the House become instrumental in filling new energy in the nation. In that sense, this session is also very important."

Naidu said this is the last session in the 75th year of Independence and MPs should give their best performance to make it a memorable session.

"During the last 13 sessions, 141 of the 248 scheduled full sittings, accounting for 57 per cent of the total sittings were disrupted partly or fully," he said. "All of you would agree that this could have been better given our mission for the nation. Better late than never. It is time now to be different and better."

Naidu, whose remarks were disrupted by slogan shouting by Congress MPs seeking discussions on rising prices, said he would give a detailed account of the functioning of the Rajya Sabha during the last five years on his last day in office.

"I would like to remind all of you that this is the last session in the 75th year of our hard-fought Independence that is being celebrated across the country.

"As in the case of all the last 13 sessions that I presided over, I would like to fervently appeal to all of you to give out your best performance to make this session a memorable one, particularly in the context of its significance," he said.

Naidu said he expected the session to set the right tone for the functioning of the House over the next 25 years of 'Amrit Kaal', which is a critical period to take India to an entirely new plane.PTI