Over 40 lakh children get COVID-19 vaccine on first day; Parents say it is a big relief 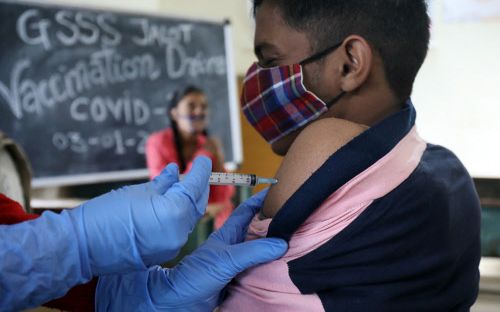 New Delhi/Mumbai/Jammu: As India launched a COVID-19 vaccination drive for the 15-18 age group on Monday, over 40 lakh children received their first dose with many of the beneficiaries and their parents saying they feel a sense of relief, especially in the backdrop of the fresh rise in cases.

From setting up attractive selfie points to putting up imaginative posters and colourful balloons, the designated vaccination centres, mostly schools and educational institutes, were decked up to welcome the youngsters.

The children, some dressed in school uniforms and others in casuals, were greeted with flowers and were gifted pens and eatables at some places after receiving the vaccine.

"Well done Young India! "Over 40 Lakhs between 15-18 age group received their first dose of #COVID19 vaccine on the 1st day of vaccination drive for children, till 8 PM. This is another feather in the cap of India's vaccination drive," Union Health Minister Mansukh Mandaviya said in a tweet.

Over 51 lakh youngsters had registered on the Co-WIN portal till Monday 8.30 PM after the process started on January 1. An estimated 7.4 crore children are there in this age group.

Prime Minister Narendra Modi said India has taken an important step forward in protecting its youth population against the disease.

''Congrats to all my young friends between the age group of 15-18 who got vaccinated. Congrats to their parents as well. I would urge more youngsters to get vaccinated in the coming days!'' he said on Twitter.

The vaccination campaign started on January 16 last year in a staggered manner, and many youngsters like Harmanjot Singh said they were keen to get the jab as soon as it was allowed for their age group.

"I was waiting for the day to get my dose of the vaccine as the pandemic forced us to stay at our homes most of the time. We want to get back to regular school and other activities as soon as possible," said Singh, a student of class 11 at a private school in Jammu.

With the drive starting mostly from schools, many principals and other officials said they received a positive response from students and their families.

“Whenever schools reopened in the midst of the pandemic, I was hesitant to send my son. It will be a relief now that he has received the vaccine,” said Savita Devi, whose son was waiting to get the jab at a Delhi government school.

Some students referred to restrictions on travelling and said they did not want to miss out on activities because they are not vaccinated.

“This was long-awaited. The third wave is already here and considering how aggressive the second wave was, we were all afraid,” said Ritesh Ghosh, a 17-year-old student.

Echoing similar sentiments, Reema Dutta, 15, said there is a sense of relief among people of her age group and they are looking forward to resuming their normal activities once vaccinated against the coronavirus.

“We can go outdoors while following COVID protocols once we have received the vaccination. The omicron is already scaring us”, she said.

But there were some like Diksha Patel, 17, from Raipur in Chhattisgarh who required some counselling from her family and friends to overcome hesitancy.

"On Sunday, our class teacher posted a message on our WhatsApp group about coming to school and getting vaccinated. I was worried as many of my family members fell ill after taking the vaccine during the second wave in April and May last year," Patel, a class 9 student of JR Dani Government High School, said.

"However, my mother and other family members spoke to me about the benefits of vaccination, especially in view of rising cases and a possible third wave," she told PTI.

Reflecting the urgency in the country as it stares at a possible third COVID-19 wave, leaders on Monday called for taking up the drive on a war footing, while Maharashtra Health Minister Rajesh Tope suggested that those in the 12-15 age bracket should also be allowed to get inoculated.

On December 25, Prime Minister Narendra Modi announced the inclusion of the 15 to 18 age group in the nationwide COVID immunisation programme from January 3.

The vaccine option for this age group would only be Covaxin, according to guidelines issued by the Union health ministry on December 27.

Meanwhile, the Centre on Monday dismissed reports alleging expired COVID-19 vaccines are being administered in India as "false and misleading".

It clarified that the national regulator had approved the shelf life extension of Covishield and Covaxin in February and October 2021 respectively.

"There have been some media reports alleging that expired vaccines are being administered in India under its national COVID-19 vaccination programme. This is false and misleading and based on incomplete information," the health ministry said in a statement.

"I did not have any fear of vaccination. I will encourage my other friends to come and get themselves vaccinated as soon as possible," said 17-year-old girl Poorvi Nakar in Agra, Uttar Pradesh.

In Mumbai, a girl student was the first to receive the vaccine dose at a jumbo COVID-19 centre in the Bandra-Kurla Complex (BKC), where the drive was virtually launched by Maharashtra Tourism and Environment Minister Aaditya Thackeray.

Mumbai has witnessed a sharp rise in COVID-19 cases since the second half of last month.

The city's civic body said vaccines will be given free of cost to children of all schools.

"The beneficiary children were offered a rose, a pen and a mask after the vaccination," Pune Mayor Murlidhar Mohol said.

Parents accompanied their children to the vaccination centres and the teenagers appeared happy and excited to take to jabs against the viral infection, he said.

Jammu and Kashmir Lt Governor Manoj Sinha launched the drive at a government school in Jammu.

"In the coming week, the targeted population (8.33 lakh) will be vaccinated," he told reporters.

As many as 822 vaccination sites have been set up across 20 districts for the vaccination of the children, officials said, appealing to the youngsters to come forward and get themselves vaccinated.

"I do not wish to cause trepidation. Experts say the Omicron variant, which has emerged as a new threat, is highly transmissible though its impact is less severe compared to previous COVID variants. So, face-mask and vaccine against Coronavirus would serve as a shield to protect us now," the chief minister said starting the drive.

Tamil Nadu hopes to administer the jabs to about 33.46 lakh school children in a month's time

“We have to hold the vaccination drive on a war footing. Crisis management committees, MPs, MLAs, social workers, volunteers, religious leaders, all are requested to appeal to the children to get vaccinated,” Madhya Pradesh Chief Minister Shivraj Singh Chouhan said.

In Gujarat, Chief Minister Bhupendra Patel launched the drive at a school in Koba area of the state capital Gandhinagar.

The Gujarat health department has prepared around 3,500 centres across the state for the special vaccination campaign, and has said it will extend the daily timings of the drive from the current schedule of 9 AM to 6 PM.

Starting the drive from Dimapur District Hospital, Nagaland Health Minister S Pangyu Phom appealed to the people to come forward and get inoculated.