Due to heavy rains, power supply was disrupted in nearly 5,150 villages, of which electricity in 5,110 villages has been restored. 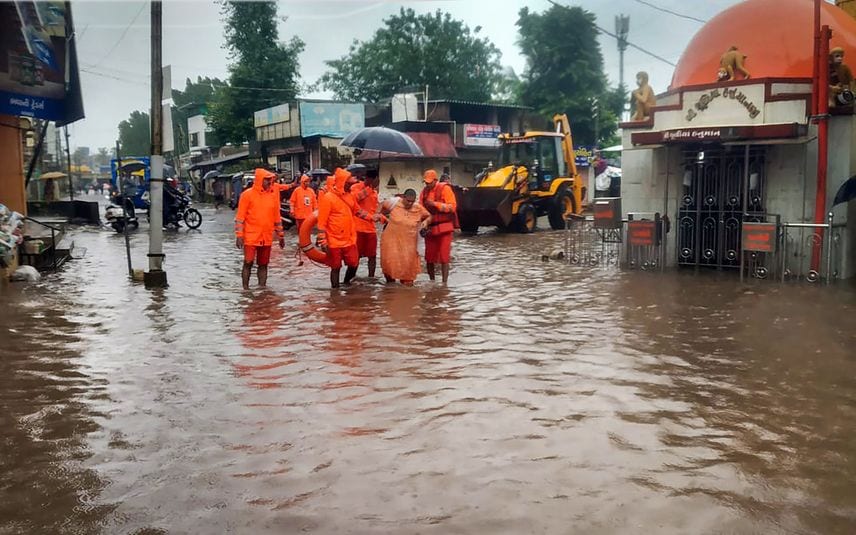 Ahmedabad: As heavy rains lashed Gujarat for the first 15 days of the monsoon season, State Chief Minister Bhupendra Patel has said that with the timely decisions taken by his government more than 33,000 people have been evacuated and the loss to life and property has been brought under control.

Patel on Thursday said, "There are currently 18 NDRF teams and 18 SDRF platoons operating across the state. Another eight teams are in reserve."

The damage to property is being estimated by surveying the area affected by the rains.

Due to heavy rains, power supply was disrupted in nearly 5,150 villages, of which electricity in 5,110 villages has been restored.

Farmers have sown Kharif crops on more than 44,36,980 hectare of land, which is more than 50 per cent area cultivated for Kharif crops.

The average rainfall recorded in 14 days of July this year is more than double that during the same time period in 2021.

Nearly 50 per cent of the total rainfall for July has been recorded in 20 talukas from July 8-11. Each taluka has received more than 50 mm of rainfall till now. For the first time in this decade, Gujarat has received such a huge amount of rainfall in July.

Revenue and Disaster Management Minister Rajendra Trivedi, while briefing the media about a review meeting over the rainfall situation in the state at Gandhinagar, said that due to heavy rains, six persons were rescued by a chopper with the help of State Coast Guard. However, rescue operations are still underway to airlift people.

A total of 570 civilians trapped in water have been rescued while eight districts in the state are still on red alert, he said.

Trivedi added that 43 deaths have been reported in the state since July 7, with the highest number of deaths due to lightning.

In addition, 477 animal deaths have also been reported. Out of 14,610 state transport bus routes operating in villages across the state, routes to 148 villages have been closed for safety reasons.

As many as 178 persons were rescued by the NDRF in Sambhoi village of Vadodara which includes 67 men, 76 women and 35 children.

In Kutiana taluka of Porbandar district, Devda village was flooded due to torrential rains since early Thursday morning. As a result, the farms were turned into islands and the locals were trying to dispose the water themselves.

The Kharo dam of Bantwa village overflowed on Thursday. As many as 14 roads in Porbandar district have been closed due to heavy rains.

Heavy rains in Ranavav and Kutiana talukas flooded the towns. The Road and Building Department closed the roads and instructed the people not to pass through them due to high flow of water on the roads.

Owing to the heavy rains, the District Collector in Valsad declared a holiday in schools, colleges and anganwadis on Friday.

On the other hand, five women labourers were crushed when a wall collapsed near Dasheshwar farm near Ognaj. All of them were evacuated by the fire brigade team and sent to Sola Civil Hospital for treatment.

N.R. Vaghela, Police Inspector, Sola police station, said that the wall appeared to have collapsed primarily due to rain.