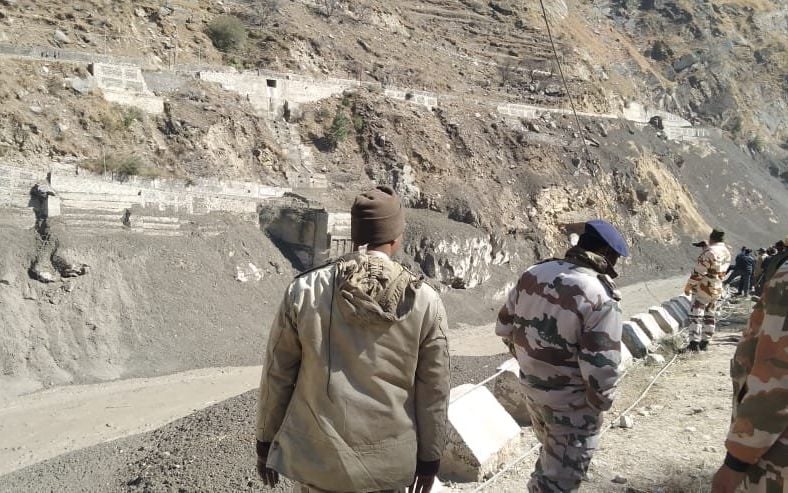 Chamoli (Uttarakhand): Over 150 people have lost their lives and over 150 are missing following a massive flood near a power project at Reni village in Joshimath area of Uttarakhand's Chamoli district on Sunday, officials said.

The incident occurred after the water level in Dhauliganga river, one of the six sources of the Ganga river, suddenly surged on Sunday morning following an avalanche near the Rishi Ganga power project. The 85 km river meets the Alaknanda river at Vishnuprayag at the base of Joshimath mountain in Uttarakhand.

The ITBP said that the flash flood occurred in Rishi Ganga at around 10.45 a.m. due to a glacier falling into it and exponentially increasing the volume of water. Due to this, the Rishi Ganga hydro project was completely devastated, it said.

"The BRO bridge on Joshimath highway was also completely washed away. There were six graziers with their livestock there and they were also swept away by the flash flood," the ITBP said.

"More than 100 labourers at the barrage and 50 plus in the tunnel lost their life as per the incharge of Tapovan NTPC work site. As many as 150 people are missing," the ITBP said.

"Two bodies were recovered at Tapovan NTPC site. One more was recovered from Chamoli village near Tapovan. About 16 to 17 labourers are safe inside the tunnel. Our team is working to rescue them."

Around 250 personnel of ITBP are carrying out rescue and search operations on the site. The paramilitary force said connectivity of its Border Outposts was totally restricted due to bridge destruction near Reni village.

Troops have been moved towards the flood-affected areas in Dhauliganga, where the massive flood occurred. Further, Indian Air Force assets, both fixed wing as well as rotary, are on standby to provide all possible assistance.

The Army Aviation Wing has also been pressed into service to carry out an aerial survey and evacuate trapped people. "One advanced light helicopter and two Cheetah helicopters are evacuating persons in the area," an Army official said.

Four columns, or around 400 personnel, of the Army have been moved to flood-affected areas, the official added. Two medical teams and engineering task force were also pressed into service.

Uttarakhand Chief Minister Trivendra Singh Rawat has convened an emergency meeting to take stock of the situation and to supervise rescue and relief operations.

Though the impact of the disaster may not be felt in Rishikesh and Haridwar, the temple towns have been put on alert.

A government spokesman said that there was not much human habitation at the site where the glacier broke apart but a number of power projects have been hit. The government has appealed to the people not to venture near the Ganga river.

Prime Minister Narendra Modi and Union Home Minister Amit Shah have spoken to the Chief Minister to take stock of the situation in the state.

The Prime Minister, during his Assam tour, reviewed the situation in Uttarakhand during a telephonic conversation with Rawat and other top officials, and the rescue and relief work underway.

The Prime Minister, in a tweet, said that he is constantly monitoring the unfortunate situation in Uttarakhand.

"India stands with Uttarakhand and the nation prays for everyone's safety there. Have been continuously speaking to senior authorities and getting updates on NDRF deployment, rescue work and relief operations."

US condoles deaths in Uttarakhand flood, wishes for a speedy recovery of injured