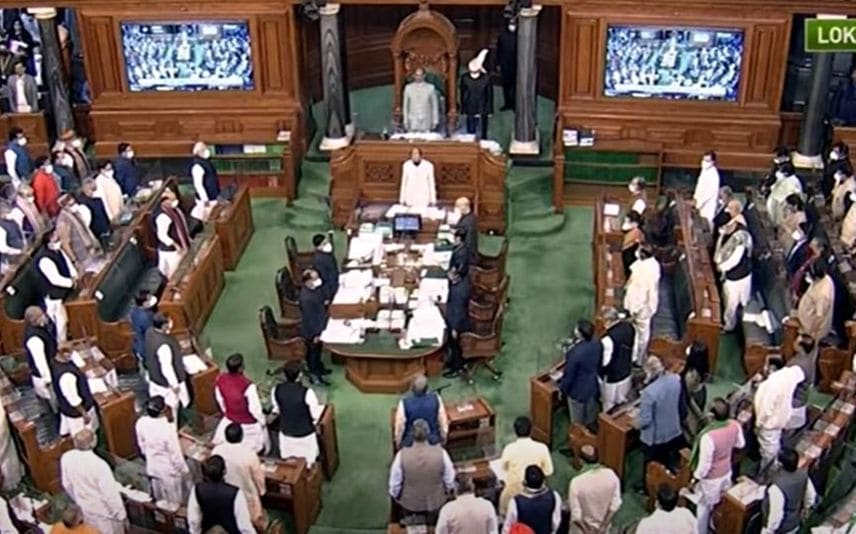 New Delhi: Opposition parties on Tuesday attacked the government over the rise in prices of cooking gas, petrol and diesel, alleging it had held back for the last few months only because of elections and had once again ''inflicted pain'' on the common man as the assembly polls were over.

They also protested in both houses of Parliament, with parties like the Congress, DMK, TMC, NCP, JMM, CPI, CPI-M, IUML, RSP, MDMK and VCK walking out from the Lok Sabha, while their members protested in Rajya Sabha forcing the chair to adjourn the House twice.

The Congress accused the government of "looting" Rs 10,000 crore through this "triple assault" on the poor and common people and said it had warned of such price hike after the assembly election in five states.

Several party leaders including Rahul Gandhi said the "lockdown'' on petrol, diesel and gas prices has been lifted and the government will now increase their cost as assembly elections are now over.

The Congress party in a statement demanded that the rise in petrol, diesel and gas prices be taken back and brought to the level that existed during the UPA rule.

"This shameless loot of people's money, especially the poor, must come to an end," the party said.

"The 'lockdown' imposed on the prices of gas, diesel and petrol has been lifted. Now the government will continuously increase the prices. If you ask the prime minister about the epidemic of inflation, he will say #ThaliBajao," Rahul Gandhi said in a tweet in Hindi.

Samajwadi Party leader Akhilesh Yadav said, "Another gift of inflation given by the BJP government to the public… LPG cylinder in Lucknow is now near the Rs 1000 mark and crosses Rs 1000 in Patna! Elections end, inflation starts..."

TMC's Derek O'Brien also tagged a tweet of Narendra Modi in 2012 and said, "Mr Prime Minister, your tweet from 2012. We Trinamool Congress and others in Opposition raised this issue today in Parliament. You or your ministers chose not to answer us. So trying my luck on Twitter. Thanks."

Modi as then Gujarat chief minister had in 2012 tweeted, "Massive hike in petrol prices is a prime example of the failure of Congress-led UPA. This will put a burden of hundreds of crores on Gujarat."

Shiv Sena leader Priyanka Chaturvedi also said that with elections over, the interests in voters and their woes over the government which claims prices are deregulated have shown how it regulates it for their political gain.

"Elections over and targets achieved, hence the discounts on fuel are also over. It is extremely unfortunate that they are using regulating petrol prices to their advantage and I'm certain that the voters and people of this country recognise that," Chaturvedi said.

"This government, drunk in their arrogance of power, is refusing to acknowledge the pain of the common man of this country," the Shiv Sena leader also said.

"The Modi government has once again exposed its anti-people and anti-poor policy. By raising 80 paise on petrol and diesel, the government has taken out Rs 10,000 crore from the pockets of the poor people today," Kharge told reporters.

He also said that if the government is increasing prices of oil despite purchasing it from Russia and other sources, "it is a loot of people's money, especially of the poor people".

Chowdhury, the leader of the Congress in Lok Sabha, said it was feared that as soon as the results of the elections in five states are out, there will be a huge increase in the price of petrol, diesel, cooking gas, kerosene all over India.

"Today the apprehension we had on this one-sided price hike is turning out true."

"We will stand against this exploitation of the poor both inside the Lok Sabha and outside. No one can stop us in this fight for the common people," Chowdhury said.

Speaking in the same vein, Anand Sharma said it is clear the government was just waiting for the election results to be out to raise the prices.

When the prices of petrol, diesel and gas did not increase during the elections, it can happen even now, Congress leader Priyanka Gandhi Vadra said, adding the government should stop this "'attack on the pockets of the people".

Petrol and diesel prices were on Tuesday hiked by 80 paise a litre each while domestic cooking gas LPG rates were increased by Rs 50 per cylinder as state oil firms ended an over four-and-half month hiatus in rate revision, fanning inflation fears.

While LPG rates were last revised on October 6, 2021, petrol and diesel prices had been on a freeze since November 4 as five states, including Uttar Pradesh and Punjab, went to the polls. LPG prices had gone up by close to Rs 100 per cylinder between July and October 6, 2021, triggering criticism.