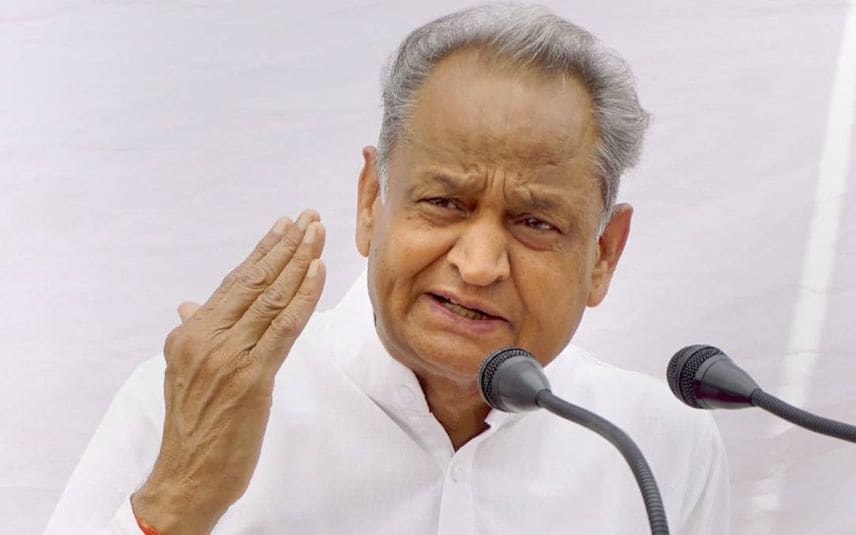 New Delhi: Rajasthan Chief Minister and Congress leader Ashok Gehlot on Wednesday said that efforts continued till the last minute to make Rahul Gandhi as the president of the grand old party since he is the only one who can challenge Prime Minister Narendra Modi and BJP government.

Speaking to media persons here in the national capital, Gehlot said, "The leadership that Sonia Gandhi ji led for 22 years will always be remembered. We all had requested her in 1998 to take over as the party president otherwise the party will be shattered. She took the challenge in the interest of the Congress party despite having language issues. After that, she was Congress President for 22 years and the governments were formed in 13 states at that time. She performed very well as a party chief that which no one can forget."

He further said that it was Rahul Gandhi's desire that for once a non-Gandhi should become the President of the party.

"It was Rahul Gandhi's desire that for once a non-Gandhi should become the President of the party. However, till the last minute, efforts were made to make Rahul Gandhi the party president as only he can challenge Modi and the government," said Gehlot.

The Rajasthan chief minister also congratulated Mallikarjun Kharge and promised to will work to strengthen the party.

"Today is a new beginning. We congratulate Mallikarjun Kharge Ji and will work to strengthen the party," Gehlot said.

The newly elected Congress president Mallikarjun Kharge, ahead of taking charge of the post visited Rajghat in the national capital to pay homage to Mahatma Gandhi.

The veteran leader will take charge as the All India Congress Committee (AICC) President at an event at the Congress headquarters here later in the day. At the ceremony, Kharge will be handed over a certificate of election by Sonia Gandhi.

Congress leader Rahul Gandhi is also likely to be present at the ceremony. Rahul Gandhi will take a break from his ongoing Bharat Jodo Yatra to participate in the event.

Kharge will be the first Congress President in 24 years who does not belong to the Nehru-Gandhi family.

Meanwhile, preparations are on at Congress' headquarters for Kharge's oath-taking ceremony.

The invitation has been sent to all the above stakeholders by the General Secretary organisation KC Venugopal.

Chhattisgarh Chief Minister Bhupesh Baghel had said that he would also be present at the event.

"Mallikarjun Kharge will take charge as the national president of the Congress party. I too have been asked to be present at the occasion. So, I am going to Delhi," he said in Raipur.Kharge trumped his opponent Shashi Tharoor by a huge margin in the race to the party's top post, thus becoming the first non-Gandhi to take over the office after 24 years.

Kharge got 7,897 votes in the presidential contest while his opponent Tharoor received 1,072 votes in the voting held on October 17.

Soon after his poll victory, Kharge said that the party has presented an "example of strengthening the country's democracy by conducting organisational elections" at a time when "democracy is in danger" in the country.

Addressing the media after his victory, Kharge said Congress has "continuously strengthened democracy" in the 75-year history of the country and protected the Constitution.

"Now when democracy is in danger and Constitution is being attacked, and every institution is being broken, Congress has presented an example of strengthening the country's democracy by conducting organisational elections at the national level. I thank everyone connected with the election," he said.

He also congratulated Tharoor and said that they discussed methods to take the party forward. Tharoor had visited Kharge's residence to congratulate him on his victory.

"I want to congratulate my partner Shashi Tharoor as well. We were contesting the election as representatives. He met me and we discussed how to take the party forward," Kharge said.Also, Kharge will visit poll-bound states like Himachal Pradesh and Gujarat soon. (ANI)

Congress' 2018 return in Rajasthan because of my previous work: Ashok Gehlot