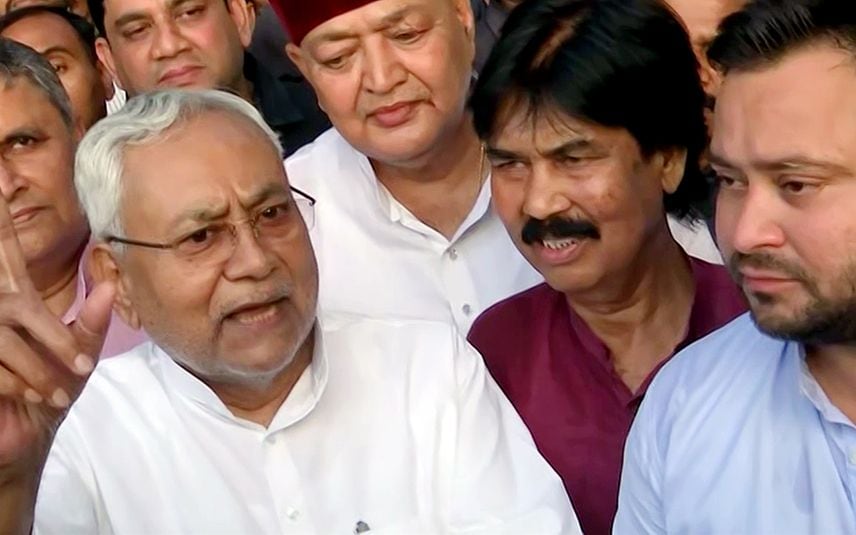 Patna (Bihar):JD(U) leader Nitish Kumar is likely to take oath as Bihar's chief minister again on Wednesday afternoon, according to a tweet by his new alliance partner Rashtriya Janata Dal.

"The swearing-in ceremony of Honorable Chief Minister and Deputy Chief Minister will be held tomorrow at 2 pm at Raj Bhavan," the party said in a tweet from its official handle.

While the RJD tweet did not mention any names, it is widely expected that Nitish Kumar would be the chief minister while Tejashwi Yadav would become his deputy.

In a day of fast-paced political developments, Bihar's chief minister Nitish Kumar twice met Governor Phagu Chauhan, first to hand over his resignation as NDA chief minister and then after being elected leader of the RJD-led `Mahagathbandhan' (grand alliance) to stake claim for the top job in the state once again.

Kumar said he submitted a list of 164 MLAs to the governor who will decide when the oath-taking can take place. The effective strength of the state Assembly is 242 and the magic figure is 122.

Meanwhile, sources said Kumar spoke to both Congress president Sonia Gandhi and Rahul Gandhi soon after resigning from his post of chief minister. He is also learnt to have thanked the Congress leadership for extending support in the formation of the new government. It is widely speculated that Congress is likely to get four ministerial berths in the new government.

Besides the four ministerial berths, the Congress has also sought the post of Speaker of the state assembly, but Kumar is not keen on giving that, sources said.

The Congress has 19 MLAs in the 243-member Bihar Assembly while the JD(U) has 45, RJD 79, CPI(ML) 12, and CPI and CPI(M) each have two legislators. The BJP has 77 MLAs in Bihar while the Jitan Ram Manjhi-led Hindustani Awam Morcha (HAM) has 4. The House has one Independent MLA while one seat is vacant.

Bihar Congress president Madan Mohan Jha and the party's in-charge of Bihar affairs Bhakta Charan Das were present at the meeting of Nitish Kumar, Tejashwi Yadav and leaders of other parties.

All 19 legislators of the Congress later attended a dinner meeting at the residence of the CLP leader in the Bihar assembly in Patna.

Top Congress leadership in Delhi however, remained silent on the developments in Bihar and confabulations over the new government formation in the state.