No reduction in strength of Chinese troops at LAC: Army chief on eastern Ladakh standoff 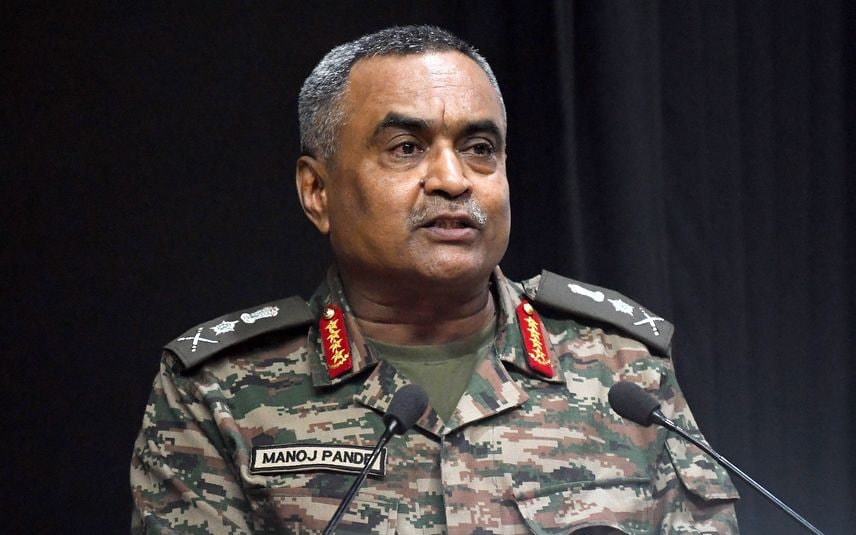 New Delhi:The situation in eastern Ladakh is "stable but unpredictable", Army Chief Gen Manoj Pande said on Saturday amid the over 30-month standoff between the Indian and Chinese troops in the high-altitude region.

In an address at a think-tank, Gen Pande said the focus of the next round of military talks would be to resolve issues at the two remaining friction points, seen as a reference to Demchok and Depsang in that region.

The Army chief also said that there has been no reduction in the strength of the Chinese troops at the Line of Actual Control (LAC) in the region though there are indications of the return of some of the PLA brigades with the onset of winter as they came for collective training.

Gen Pande, in his remarks at the 'Chanakya Dialogues', pitched for "very carefully calibrated" actions on the LAC to be able to safeguard India's interests and sensitivities.

"If I have to describe it (situation) in a single sentence, then I will say that the situation is stable but unpredictable," Gen Pande said, replying to a question.

On China's infrastructure development along the LAC in eastern Ladakh, the Army Chief said it is going on "unabated" and that they are constructing helipads, airfields and roads right up to the passes.

"One of the notable developments has been the G695 highway which is parallel to the LAC which will give them the ability not only to move forces forward but also switch forces from one sector to another," he said.

"As far as our preparations are concerned, our transition to the winter posture is currently underway. But We have also made sure that we have adequate forces and adequate reserves to be able to deal with any contingency," he added.

"But in the larger context, we need to very carefully calibrate our actions on the LAC to be able to safeguard both our interests and sensitivities yet be prepared to deal with all types of contingencies," the Army Chief noted.

There has been no progress yet on resolving the standoff in the Demchok and Depsang regions though the two sides withdrew troops from a number of friction points following a series of military and diplomatic talks.

"You are aware of the ongoing talks right at the political, diplomatic and military levels which have been going on between the two sides. Because of these talks, we have been able to find resolution in five out of the seven friction points which were on the table," Gen Pande said.

"It is for the remaining two friction points that we are attempting to find resolution," he noted.

Gen Pande noted that there was no reduction in the number of troops of the Chinese People's Liberation Army (PLA) in the region.

"As far as PLA's force levels are concerned, there has been no significant reduction," he said adding there are indications that some of their brigades, which have come for the purpose of collective training, are going back with the onset of winter.

"But on the LAC itself, there is no reduction of strength," he said.

The Chief of Army Staff also referred to last month's talks between the two sides under the framework Working Mechanism for Consultation and Coordination (WMCC) on the India-China Border Affairs.

"We are looking on the next date for the 17th round (of military talks) and that is where I believe through dialogue, we hope to find resolution in these two areas (Demchok and Depsang)," he said.

The 16th round of high-level military talks took place on July 17.

In line with a decision at the meeting, the two sides carried out disengagement from Patrolling Point 15 in the Gogra-Hotsprings area in September.

"We all know that what the Chinese say and what they do is quite different. It is also part of their deception, or their nature, their character. What they say or articulate, we need to....But perhaps we need to focus on their actions rather than what is there in the written text or scripts or their articulation. Perhaps, then we will not go wrong," he said.

External Affairs Minister S Jaishankar on Thursday asserted that India's relationship with China cannot be normal unless there is peace in the border areas and there is no ambiguity in New Delhi's signalling to that country.

The eastern Ladakh border standoff erupted on May 5, 2020, following a violent clash in the Pangong lake area.

Both sides gradually enhanced their deployment by rushing in tens of thousands of soldiers and heavy weaponry.

As a result of a series of military and diplomatic talks, the two sides completed the disengagement process last year on the north and south banks of the Pangong lake and in the Gogra area.

The disengagement in the Pangong Lake area took place in February last year while the withdrawal of troops and equipment in Patrolling Point 17 (A) in Gogra took place in August last year.

2 light combat choppers made by HAL deployed in Ladakh

Kerala falls behind in railway report card for past 8 years