No one should make any mistake of testing India's patience: Army Chief on Ladakh standoff with China 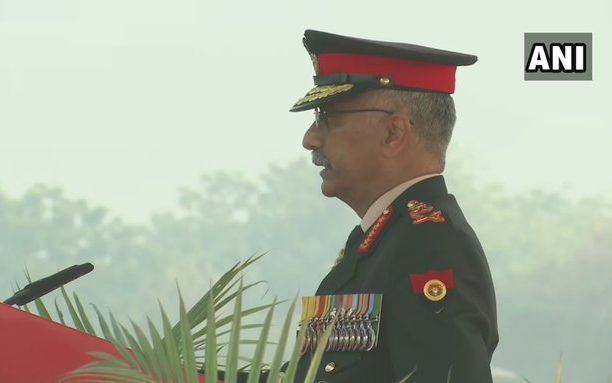 New Delhi: In a tough message to China amid the Ladakh standoff, Army Chief Gen MM Naravane on Friday said no one should make any mistake of testing India's patience even as he asserted that a befitting response was given to the "conspiracy" of unilaterally changing the status quo along the northern frontier.

Gen Naravane at the same time said India is committed to resolve the over eight-month-long military standoff with China through talks.

In his address at the Army Day parade in Delhi Cantonment, Gen Naravane said the sacrifice of the "Galwan heroes" in eastern Ladakh in June last year will not go waste and that the Indian Army will not allow any harm to the country's sovereignty and security.

"We are committed to resolve disputes through talks and political efforts but no one should make any mistake of testing our patience," he said in the presence of the country's top military brass including Chief of Defence Staff Gen Bipin Rawat, Navy Chief Admiral Karambir Singh and IAF Chief Air Chief Marshal RKS Bhadauria.

Indian and Chinese troops are locked in a bitter standoff in eastern Ladakh since May 5 as multiple rounds of military and diplomatic talks have not yet produced any breakthrough.

Referring to the situation along the Line of Control (LoC), Gen Naravane said Pakistan continues to shelter terrorists and 300 to 400 of them are waiting in training camps on the Pakistani side of the LoC to infiltrate into India.

On the situation in eastern Ladakh, Gen Naravane said despite the severe cold and difficult situation, the morale of the Indian soldiers are "higher" then the region's mountain peaks which they are protecting effectively and with promptness.

"The last year was very challenging for the Army. You are aware of the tension with China along the northern border. A befitting reply was given to the conspiracy of unilaterally changing the status quo on the border," he said.

"I want to assure the country that the sacrifice of the Galwan heroes will not go waste. Indian Army will not allow any harm to the country's sovereignty and security."

Twenty Indian Army personnel laid down their lives in a fierce hand-to-hand combat on June 15 last in Galwan Valley, an incident that marked the most serious military conflict between the two sides in decades. China is yet to disclose the number of its soldiers killed and injured in the clash though it officially admitted to have suffered casualties. According to an American intelligence report, the number of casualties on the Chinese side was 35.

Gen Naravane also noted that eight rounds of military talks were held between India and China to bring the situation under control.

"Our efforts will continue to find a solution to the current situation on the basis of mutual and equal security," he said.

About cross-border terrorism emanating from Pakistan, he said there has been 44 per cent increase in ceasefire violations that reflects the neighbouring country's sinister design.

“Strong response is being given to the enemy on the other border. Pakistan continues to provide safe haven to terrorists. In the training camps, across the LOC around 300-400 terrorists are ready to infiltrate," he said.

"There was an increase of 44 per cent in the ceasefire violations last year which is proof of Pakistan's sinister plans. There were also attempts to smuggle weapons using drones,” he added. Pakistan often provides cover fire to help terrorists sneak into Jammu and Kashmir.

"There were efforts to smuggle in weapons (into India) from across the border using drones and tunnels," he said

The Chief of the Army Staff said India's active operations and strong counter infiltration grid not only inflicted heavy losses on the enemy but they contained infiltration attempts as well.

Gen Naravane said the Army killed over 200 terrorists in counter-terror operations and on the LoC last year, adding these measures have provided people of Jammu and Kashmir relief from terrorism.

On the security situation in the North East, he said major success was achieved in anti-militancy operations conducted by the Army in cooperation with the Myanmarese Army.

Gen Naravane said around 600 militants had surrendered last year in the North East due to proactive operations by the armed forces. Myanmar is one of India's strategic neighbours and shares a 1,640-km-long border with a number of northeastern states including militancy-hit Nagaland and Manipur.

There has been increasing cooperation between Indian and Myanmarese armies in the last few years in guarding the border. Some militant groups from the North-East region are taking shelter in Myanmar.