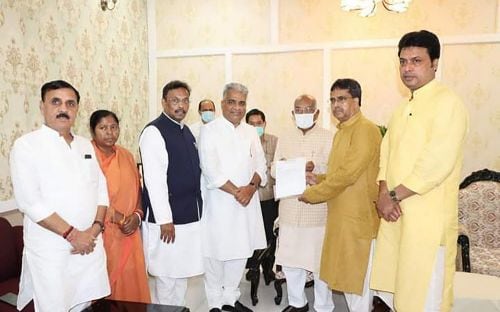 Agartala: The move to bring in an ageing dental surgeon Dr Manik Saha as chief minister, replacing the younger Biplab Kumar Deb, is being seen by many here as a `brand renewal exercise' in this strategic, gateway state in the North East.

Saha, a maxillofacial surgeon, who passed out from King George Medical College of Lucknow was a member of the opposition Congress before he joined BJP in 2016 and became the President of BJP's Tripura unit in 2020 after Deb quit that post.

A former badminton player of repute in the state, Saha is also the President of Tripura Cricket Association.

However, his importance to BJP stems from his clean image and his track record which includes crafting BJP's victory in all thirteen civic bodies in the polls held in November 2021 in Tripura at a time when TMC was engaged in a turf war with the saffron party.

Sources said the move comes after an analysis sent by the RSS to BJP's central leadership indicated there was a need for a change of guard in the party and government.

Highly placed sources in the ruling party said the move was required for “immediate strengthening of the party” when the organization was not in good shape ahead of elections to the state assembly due within the next 8-9 months.

Party insiders said the situation was unravelling at the ground level workers as a section of young workers, dubbed the ‘bike gang', were engaged acts of high-handedness, “which was tarnishing the image of the party”.

Senior leaders were repeatedly dispatching letters to the central leadership on the issue.

However, what was really was giving a nightmare to the party was the sudden rise of the Tripura Indigenous Progressive Regional Alliance or TIPRA Motha, a regional political party led by the royal scion Pradyot Kishore Debbarma, seeking a separate state for the indigenous people of Tripura.

The party swept the Tripura Tribal Areas Autonomous District Council (TTAADC) elections held in April last year, winning 18 of the 28 seats over the 'Greater Tipraland' demand in a direct contest with the ruling BJP-IPFT alliance.

The statehood demand may affect results in many assembly seats, where tribals hold considerable clout electorally.

The TIPRA Motha had completely polarized the state's politics by raising the demand for separate tribal state and triggered tensions in some mixed pockets of the state, where the tribals account for a third of the population.

Party sources said that the BJP is not in a position to counter the rise of TIPRA Motha in tribal dominated areas and the tribal party would sweep in the tribal areas in the next elections.

Moreover, the tribal party has threatened to field candidates in at least 25 general seats out of the total forty general seats. With tribals accounting for a significant section of the votes in these seats, it would mean Debbarma's support could well hold the key to the next elections.

BJP's tribal ally, the Indigenous People's Front of Tripura (IPFT), could not secure a single seat in the last tribal council elections and moreover it recently suffered a vertical split and was divided under the leadership of two incumbent ministers.

Under the circumstances, the saffron party decided to strengthen its party organizationally and go in for a rejig of leadership in its tribal wing, Janajati Morcha.

Whether the amiable Saha will be able to tackle the diverse issues left behind by his predecessor and steer BJP to a clear victory or whether the rejuvenated Left or the incoming TMC in collaboration with the young royal's party will be able to snatch a win is of course something which only time will tell. PTI