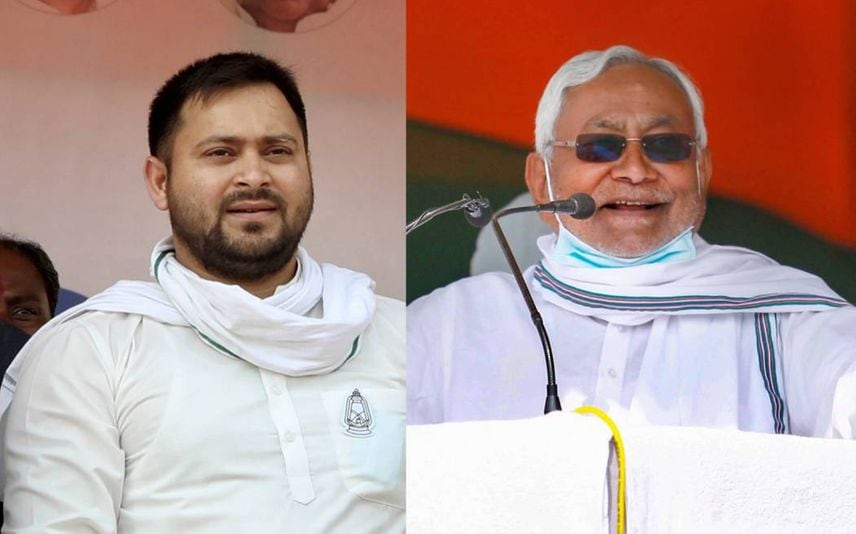 Patna: The NDA is leading in 112 seats, while the Grand Alliance Mahagathbandhan is ahead in 111 seats, as per the early trends of counting in Bihar assembly polls at 10.15 am.

Official trends showed the BJP is leading in 62 seats and its allies JD(U) and Vikassheel Insaan Party in 46 and 4 respectively.

The Rashtriya Janata Dal is leading in 67 seats and its ally Congress in 26 and the Communist Party of India (Marxist) in 10 seats.

The Bahujan Samaj Party is leading in one seat.

Counting of votes got underway at 8 am and postal ballots were opened first and these trends are mostly based on these ballots.

Officials said the final results may be delayed a bit this time owing to an increase in the number of polling stations in view of the coronavirus pandemic.

Counting of votes got underway Tuesday morning for the three-phase Bihar assembly elections that may herald a new era in state politics, with exit polls predicting a victory for the RJD-led Grand Alliance.

The exercise will decide the electoral fate of over 3,700 candidates who are in the race to win the 243 seats of the state assembly.

Counting started at 8 am at 55 centres spread across 38 districts amid tight security and precautions to avoid the spread of COVID-19 pandemic during the process. Over 57 per cent of about 7.30 crore electors have exercised their franchise in what is the first major election in the country since the onset of the pandemic.

Votes are also being simultaneously counted for the Valmiki Nagar Lok Sabha by-poll, which was necessitated by the death of JD(U) MP Baidyanath Mahto.

Officials said the trends and results might be delayed a bit this time as the number of polling stations were raised from 72,723 earlier to 1,06,515, an increase of 46.5 per cent, to ensure adherence to social distancing measures in view of the pandemic.

A total of 3,733 candidates are in the fray, including 371 women and a transgender.

Most exit polls have predicted a rout for the ruling JD(U)-BJP combine and a resounding victory for the Grand Alliance (Mahagathbandhan) led by RJD's 31-year-old chief ministerial candidate Tejashwi Yadav.

According to Chief Electoral Officer H R Srinavasa, central armed police forces have been deployed at the strong rooms, where the EVMs have been stored since the completion of voting, and the halls where these are being unsealed now.

Of the state's 243 assembly constituencies, among the most keenly watched will obviously be Raghopur in Vaishali district from where Tejashwi Yadav is seeking re-election.

Raghopur has been in the past represented by his parents Lalu Prasad and Rabri Devi, both former chief ministers.

Nitish Kumar is a member of the state's legislative council and has not contested the assembly election.

Tuesday's counting will also decide the political fate of nearly a dozen of ministers.

Prohibitory orders are in place outside the counting centres to prevent people from gathering in large numbers, officials said.

Nitish Kumar to be sworn-in as Bihar CM; 2 deputy CMs from BJP likely

NDA wins in Bihar; Will Nitish Kumar be CM again?