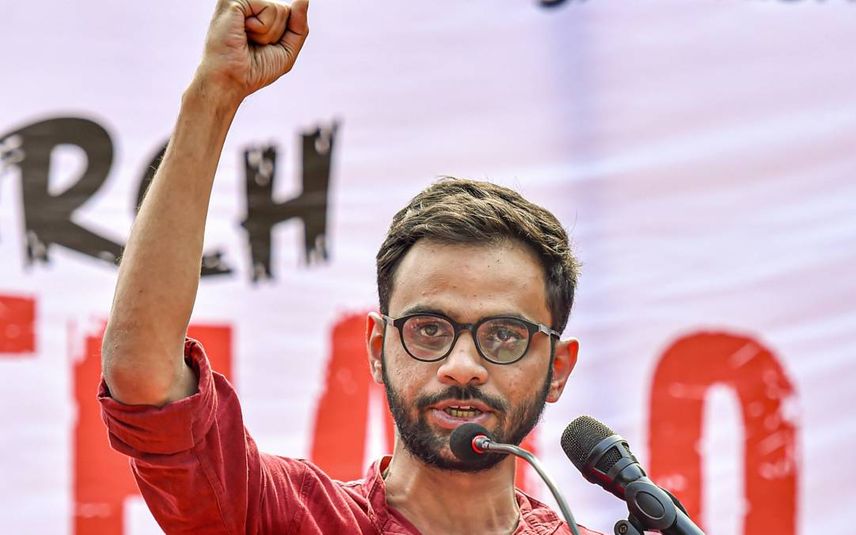 New Delhi: The special bench comprising of Justices Siddharth Mridul and Rajnish Bhatnagar while rejecting the bail plea of Umar Khalid, observed that the name of the appellant finds recurring mention from the beginning of the conspiracy till the culmination of the ensuing riots. Admittedly, he was a member of the WhatsApp group of Muslim students of Jawaharlal Nehru University (JNU).

The Delhi High Court on Tuesday dismissed the bail plea of Umar Khalid accused in a larger conspiracy case related to the Northeast Delhi riots of February 2020.

The bench said, " We don't find any merit in the appeal, the petition is dismissed.

The bench observed, "On the in-depth and considered perusal of the charge sheet, the accompanying documents and in view of the discussions herein above, only for the limited purpose of the present bail; this court expresses the inescapable conclusion that allegations against the Appellant are "prima facie true" and hence, the embargo created by Section 43D(5) of UAPA applies squarely with regard to the consideration of the grant of bail to the Appellant. Thus, the Appellant"s application seeking regular bail is rejected."

As a natural and consequential corollary to the observations as mentioned herein above, the impugned order of the learned Session Judge dated March 24, 2022, does not warrant any interference by this Court and is sustained. As a sequel thereto, the Appeal is dismissed, the high bench said.

He participated in various meetings at Jantar Mantar, Jangpura Office, Shaheen Bagh, Seelampur, Jafrabad and Indian Social Institute on various dates. He was a member of the DPSG group. He referred to the visit of the president of the USA to India in his Amrawati Speech, the court further observed.

The bench said that the CDR analysis depicts that there had been a flurry of calls that happened post-riots amongst the appellant and other co-accused. The cumulative statement of the protected witnesses indicates the presence and active involvement of the appellant in the protests, engineered against the CAA/NRC.

Admittedly these protests metamorphosed into violent riots in February 2020, which began by firstly choking public roads, then violently and designedly attacking policemen and random members of the public, whereat firearms, acid bottles, stones etc. were used, resulting in the admitted and sad loss of 53 precious lives and the destruction of property worth several Crores. These protests & riots prima-facie seem to be orchestrated at the conspiratorial meetings held from December 2019 till February 2020, the bench added.

The bench said, "Learned Sessions Judge has fairly recorded that there are some inconsistencies in the statements of some protected witnesses; however, as rightly held by the court below a finding has to be given on a cumulative reading of statements of all the witnesses and other events presented in the charge-sheet."

The bench further said that the learned Judge has after noting the facts in great detail and even giving due regard to these discrepancies thus arrived at a finding as clearly mentioned in the impugned order.

The High Court said, "The learned Sessions Judge didn't miss the wood for the trees and has extensively dealt with the contention of the rival parties to arrive at a just decision, which cannot be faulted, especially when at the stage of bail, the learned Judge was mandated to only be satisfied to the extent of accusation being "prima-facie true" and not conduct a 'Mini Trial' and return an elaborate findings relating to the veracity of the testimony of each witness, whose statements were recorded during investigation.

The special bench observed, "Pertinently, this court cannot turn its blind eye to other incriminating materials against the appellant in the present case. The fact that there is no denying that on February 17, 2020, the appellant delivered a speech at Amrawati, Maharashtra referring to the visit of Donald Trump, President of the United States of America, which according to the prosecution heralded the riots in North-East Delhi."

The bench further noted, "The manner in which the administration initially rejected permission for the appellant"s speech and thereafter how the speech came to be delivered clandestinely on that very day is something which gives credibility to the accusation of the prosecution.

" Further, the CCTV footage filed along with the charge sheet, its analysis and the flurry of calls amongst the appellant and other co-accused after the riots of February 24, 2020, also meritsconsideration in the background of various meetings, statements of various protected witnesses and the WhatsApp chats filed in the charge sheet," the High Court bench noted in judgement.

In its 52 pages judgement the special bench said that as per the charge sheet and the materials collated during the investigation if taken at face value, there appears to be a premeditated conspiracy for causing disruptive chakka-jam and pre-planned protests at different planned sites in Delhi, which was engineered to escalate to confrontational chakka-jam and incitement to violence and culminate in riots in a natural course on specific dates.