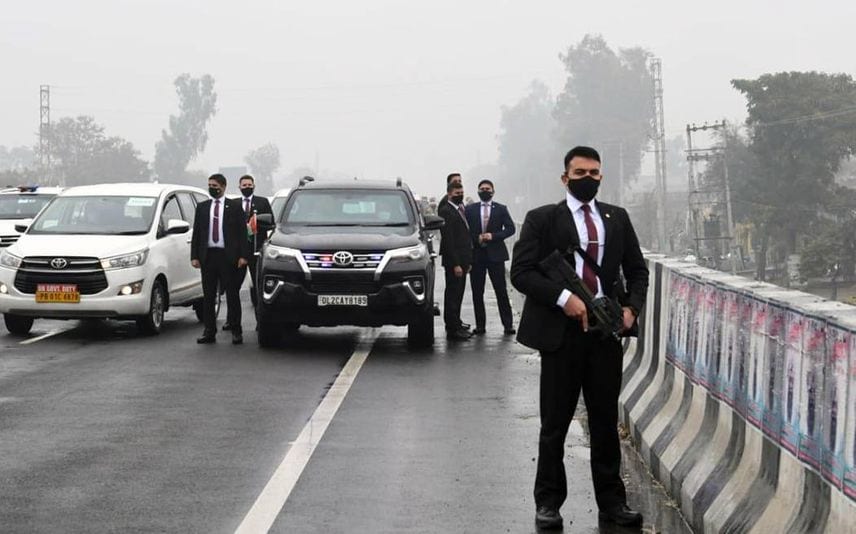 New Delhi: The Supreme Court will on Friday hear a plea seeking a thorough investigation into the breach in Prime Minister Narendra Modi's security in Punjab and ensuring there is no such event in the future.

A bench headed by Chief Justice N V Ramana took note of senior advocate Maninder Singh's submission that a serious breach in the prime minister's security took place in Ferozepur, Punjab, on Wednesday. It led to the stalling of his cavalcade in Bathinda.

After that, the prime minister returned from the poll-bound state without attending any event, including a rally.

"Serve the copy (of the petition) to the state government. We will take it tomorrow as the first item," the bench, also comprising Justices Surya Kant and Hima Kohli, said on Thursday when the issue was mentioned for urgent hearing today itself.

Singh, who at the outset sought an urgent hearing of his petition, said a direction should be passed to the district judge of Bathinda to take possession of all the evidence on security arrangements made by the Punjab Police for the prime minister's visit.

"Given the situation in Punjab, there should be a fair probe into the lapse and accountability fixed so that such a situation does not arise again in future," the senior lawyer said.

"What is it that you are expecting from us?” the bench asked.

"We want that such an incident is not repeated," the lawyer said, adding that "professional and effective investigation” was needed into the police ‘bandobast' under the supervision of the court. It would be appropriate given the atmosphere today.

“The record has to be taken by the district judge, and thereafter your lordships may decide what steps are to be taken. Please consider passing an order today itself", he submitted.

The senior lawyer was mentioning the plea filed by ‘Lawyers Voice' which said the breach in security was intentional and raised questions on national security and the role of present state government authorities.

On Wednesday, prime minister's convoy was stranded on a flyover due to a blockade by protesters in Ferozepur after which he returned from poll-bound Punjab without attending any event, including a rally.

The Union Home Ministry had also directed the state government to file an immediate report, saying it did not ensure the required deployment. Home Minister Amit Shah said such dereliction of the security procedure during the prime minister's visit is totally unacceptable and accountability will be fixed.