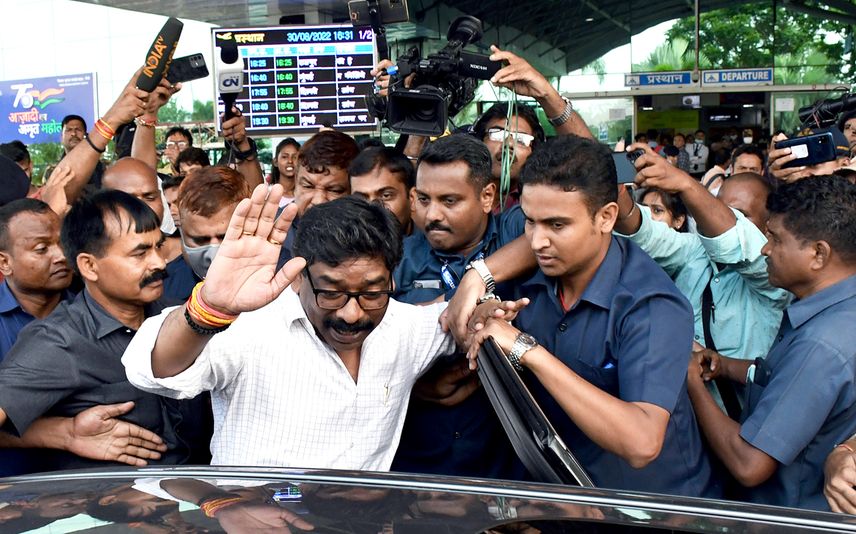 New Delhi: The Enforcement Directorate has summoned Jharkhand Chief Minister Hemant Soren for questioning on November 3 in a money laundering case linked to alleged illegal mining in the state, officials said on Wednesday.

Soren, 47, has been asked to appear before the federal probe agency at its regional office in state capital Ranchi at 11 am on Thursday.

The agency wants to question and record the statement of the chief minister under the Prevention of Money Laundering Act (PMLA), they said.

The Enforcement Directorate (ED) had earlier arrested his political aide Pankaj Mishra and two others -- local muscleman Bachhu Yadav and Prem Prakash -- in this case.

The agency has said it has "identified" proceeds of crime relating to illegal mining in the state to the tune of more than Rs 1,000 crore till now.

The ED probe began after the agency raided Mishra and his alleged associates on July 8, covering 19 locations in Sahibganj, Barhait, Rajmahal, Mirza Chauki and Barharwa in Jharkhand in the case linked to alleged instances of illegal mining and extortion.

"The PMLA investigation revealed that Mishra, who enjoys a political clout, being the representative of the chief minister, MLA from Barhait, Sahibganj, Jharkhand controls the illegal mining businesses as well as inland ferry services in Sahibganj and its adjoining areas through his accomplices.

"He exercises considerable control over the mining of stone chips and boulders as well as installation and operations of several crushers, set up across various mining sites in Sahibganj," the ED had alleged after filing a charge sheet in the case before a special court in Ranchi.

Forty-seven search operations have been conducted and cash worth Rs 5.34 crore has been seized, bank balances worth Rs 13.32 crore have been frozen, an inland water vessel worth Rs 30 crore has been seized apart from five stone crushers, two trucks and two AK 47 assault rifles (these weapons were later claimed by Jharkhand police as its own) till now, the ED said.

Some banking documents and cheques that purportedly bore the name of the chief minister were also recovered from the searched premises, officials had said.

The action was initiated after the ED filed a case under the PMLA against Mishra and others in March, alleging that the former "illegally grabbed or amassed huge assets in his favour".

It took cognisance of a state police FIR filed against Mishra at Barharwa police station in Sahibganj district and some other police complaints filed in the illegal mining trade instances under various sections of the Arms Act, Explosive Substances Act, among others.

A second instance where cash linked to alleged illegal mining in the state was unearthed pertains to the ED action against suspended Indian Administrative Service (IAS) officer Pooja Singhal in May.

Apart from the 2000-batch IAS officer, her businessman husband, a chartered accountant linked to the couple and others were raided by the ED as part of the money laundering probe linked to a case of alleged corruption in MGNREGA scheme.

Singhal, who was holding the charge of Jharkhand mining secretary, was suspended by the state government following her arrest by the ED.

Suman Kumar, a chartered accountant linked to Singhal and her husband, was also arrested by the agency and cash amounting to Rs 19.76 crore was seized by it.