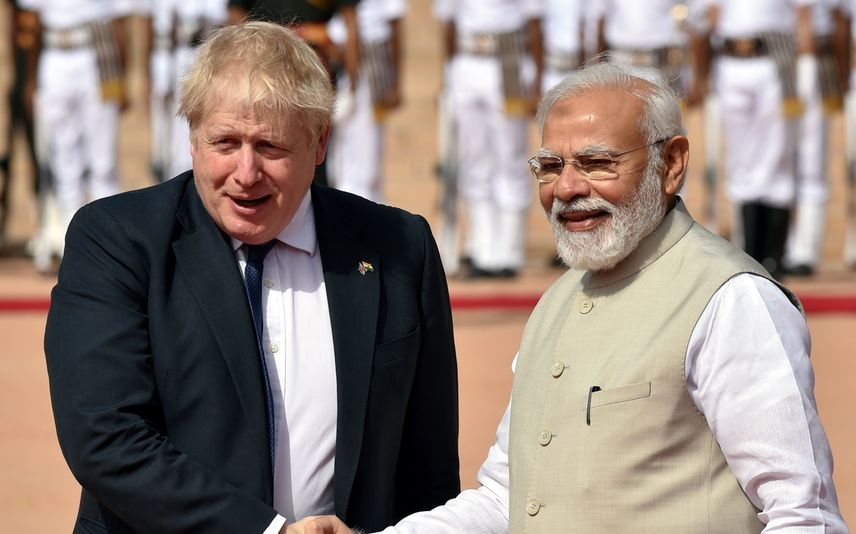 New Delhi: Prime Minister Narendra Modi and his British counterpart Boris Johnson on Friday expressed "zero tolerance" for terrorism in all its forms and reiterated their condemnation of Mumbai and Pathankot terror attacks.

In their wide-ranging talks, Modi and Johnson agreed to constitute a sub-group on countering extremism in order to further enhance cooperation between India and the UK in ensuring that all possible actions are taken against groups and individuals based in or operating out of either country.

"Both leaders expressed zero tolerance for terrorism in all its forms – and for all those who encourage, support and finance terrorism or provide sanctuary to terrorists and terror groups, whatever their motivation may be," a joint statement said.

It said the two prime ministers called upon all countries to work together to root out terrorist safe havens and infrastructure, disrupt terrorist networks and their financing channels, and halt cross-border movement of terrorists.

It said Modi and Johnson reiterated their condemnation of terrorist attacks in India and the UK, including the Mumbai and Pathankot attacks.

"They emphasised the importance of perpetrators of terrorist attacks being systematically and expeditiously brought to justice, and agreed to work together to take concerted action against globally proscribed terrorist entities and individuals," the statement said.

It said the two leaders expressed satisfaction on the ongoing cooperation through the Joint Working Group on Counter-Terrorism (JWG-CT), including with regard to information and intelligence sharing on terror entities and individuals.

"Within this framework, they agreed to constitute a sub-group on countering extremism in order to further enhance cooperation between the two sides in ensuring that all possible actions are taken against groups and individuals based in or operating out of either country, seeking to incite violent extremism and terrorism and who are involved in financing such activities," it said.

In their talks, Modi and Johnson also reaffirmed their commitment to a free, open, peaceful and secure cyberspace and welcomed the progress under the enhanced India-UK cyber security partnership to tackle shared cyber threats including to critical national infrastructure.

"They outlined commitment, in a joint cyber statement, to deepen cooperation across cyber governance, deterrence and strengthening cyber resilience," the statement said.

On the situation in Afghanistan, the two leaders reaffirmed the importance of UN Security Council (UNSC) Resolution 2593 which unequivocally demanded that Afghan territory should not be used for sheltering, training, planning or financing terrorist acts.

"Both sides agreed to continue to provide immediate humanitarian assistance to the people of Afghanistan and reiterated the need for a representative and inclusive political system in support of a peaceful, secure and stable Afghanistan," the statement said. PTI