The ministry's clarification came hours after Union Minister for Housing and Urban Affairs Hardeep Singh Puri put out a tweet saying India has always welcomed those who have sought refuge in the country and announcing that all Rohingya refugees would be shifted to EWS flats in east Delhi's Bakkarwala area. 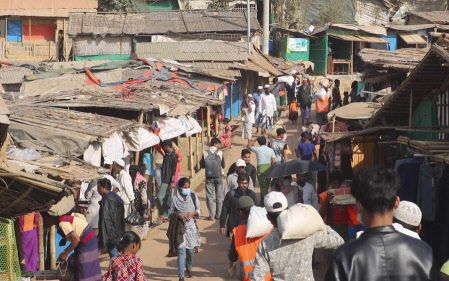 Rohingya refugees in a refugee camp in Bangladesh | AP

New Delhi: The Union Home Ministry on Wednesday denied any move to shift Rohingya Muslims in Delhi to economically weaker section (EWS) flats and directed the Delhi government to ensure the "illegal foreigners" remain in detention centres pending their extradition.

The ministry's clarification came hours after Union Minister for Housing and Urban Affairs Hardeep Singh Puri put out a tweet saying India has always welcomed those who have sought refuge in the country and announcing that all Rohingya refugees would be shifted to EWS flats in east Delhi's Bakkarwala area.

The Home Ministry issued a statement clarifying its position.

"Illegal foreigners are to be kept in Detention Centre till their deportation as per law. The Government of Delhi has not declared the present location as a Detention Centre. They have been directed to do the same immediately," a spokesperson said in the statement on Twitter.

"With respect to news reports in certain sections of media regarding Rohingya illegal foreigners, it is clarified that the MHA has not given any directions to provide EWS flats to Rohingya illegal migrants at Bakkarwala in New Delhi," the spokesperson said.

Puri tagged a news agency story in his posts and said those who had made a career out of spreading canards on India's refugee policy deliberately linking it to CAA will be disappointed.

"India respects & follows @UN Refugee Convention 1951 & provides refuge to all, regardless of their race, religion or creed," he said.

"India has always welcomed those who have sought refuge in the country. In a landmark decision all #Rohingya #Refugees will be shifted to EWS flats in Bakkarwala area of Delhi. They will be provided basic amenities, UNHCR IDs and round-the-clock @DelhiPolice protection," he posted.

According to a Home Ministry estimate, around 40,000 Rohingya migrants live in different parts of the country, including Delhi.

It has already taken up the matter of their deportation with the country concerned through the Ministry of External Affairs, the Home Ministry said.

The New Delhi Municipal Council (NDMC), which functions under the Home Ministry, has constructed EWS flats in Bakkarwala area near Tikri border.

Union Minister of State for Home Nityanand Rai said the government had got reports that Rohingya Musilms have indulged in illegal activities in the country.

He said all foreign nationals who enter into the country without valid travel documents are treated as illegal migrants.

The minister said detection and deportation of illegal migrants, including Rohingya refugees from Myanmar, after due process of nationality verification is a continuous process. PTI