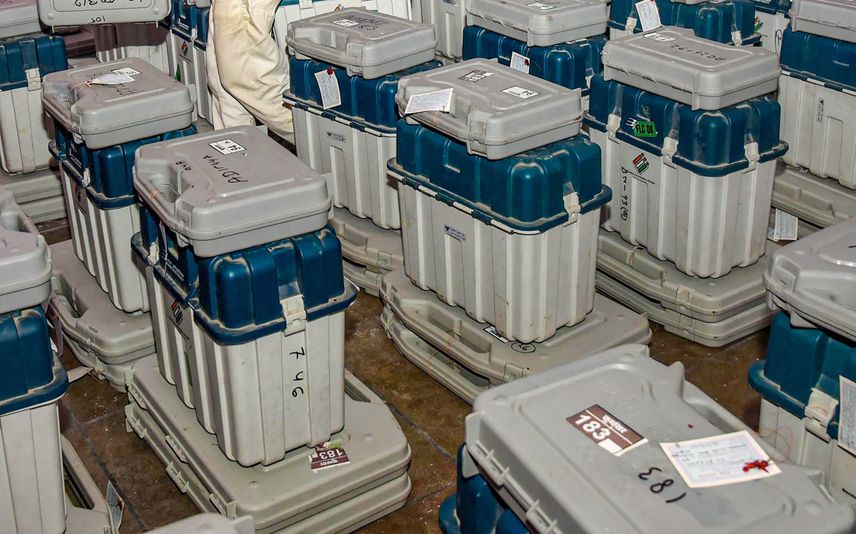 Imphal (Manipur): Riding on their poll plank of development and improved connectivity in the state in the last five years, the Bharatiya Janata Party (BJP) will try to retain the power in Manipur while the Congress-led alliance is seeking to wrest the state from the BJP and is hoping for a favourable verdict as the countdown begins for the counting of votes polled in the 2022 Assembly elections.Days ahead of the counting on March 10, the exit polls in Manipur gave a clear edge to the ruling BJP followed by Congress, a distant second. Elections for the 60-member Manipur Assembly took take place in two phases on February 28 and March 5.Ahead of the counting, proper security measures have been undertaken including the imposition of Section 144 CrPC around the counting centres to ensure that peace and tranquillity is not disturbed and counting of votes is conducted smoothly, the Chief Electoral Officer, Manipur informed.

The BJP, which formed the government in Manipur in 2017 with the support of the National People's Party (NPP), Naga People's Front (NPF) and the Lok Janshakti Party (LJP), this time, has decided to go solo and is contesting all 60 seats alone.On the other hand, Congress has formed an alliance of six political parties and named it Manipur Progressive Secular Alliance (MPSA). The coalition partners in MPSA include Congress, Communist Party of India (CPI), Communist Party of India (Marxist), Forward Bloc, Revolutionary Socialist Party (RSP) and Janata Dal (Secular).BJP Manipur President Adhikarimayum Sharda Devi exuded confidence over her party's victory in the state polls. She said that BJP has set a target of bagging more than 40 seats out of a total of 60 constituencies in Manipur."We have set a target of over 40 seats and are confident of forming a stable government. When the final results are declared, we expect the number to be 40 plus only... We haven't taken a decision on Chief Ministerial candidate and there is no point of a new CM here," Devi told ANI.Meanwhile, Congress general secretary Mukul Wasnik said that people's verdict will be in favor of the Congress in Manipur."People's verdict will be in favor of the congress and will be forming the govt here along with the other alliance parties. Time and again exit polls have found to be wrong. We believe what came out in the exit poll is far from what we will see on March 10," he said.Among the key contestants, Chief Minister N Biren Singh is in the fray from the Heingang seat while Congress leader and former Chief Minister Okram Ibobi Singh is testing his luck from Thoubal. Others include PWD Minister Th Biswajit Singh who is in the fray from Thongju; Govindas Konthoujam Singh, former Manipur Congress chief, who recently joined the BJP, from Bishenpur; Education Minister S Rajen from Lamshang, Agriculture Minister O Lukhoi from Wangoi.

The BJP has fielded former national football player Somatai Shaiza from the Ukhrul seat.In its election manifesto for Manipur, the BJP promised preservation of the rights of the indigenous people, two extra LPG cylinders, and free electric scooty to college-going girls among others. The Congress manifesto promised to bring Manipur Cultural Diversity Policy, provide free critical medical treatment for children, creation of Manipur regiment and request the Centre to repeal AFSPA. During a poll rally, Congress General Secretary Priyanka Gandhi Vadra promised unemployment allowance to the youth of Manipur if her party comes to power in the state.As per the Manipur Chief Electoral Officer's website (https://ceomanipur.nic.in/), over 20 lakh (20,91,398) voters were eligible to exercise their franchise. During this election, the total number of polling stations in the state was 2,959. A total of 1099 polling locations and 763 polling locations were identified as "vulnerable and critical".

The voting percentage was recorded at 88.69 per cent in the first phase of elections while in the second phase, it was 90.09 per cent.In 2017, the BJP stunned the Congress which ruled for 15 years in Manipur as it emerged as the second-largest party winning 21 seats in the 60-member state Assembly. The National People's Party (NPP) and Naga People's Front (NPF) bagged four seats each while the Lok Janshakti Party (LJP) managed to secure only one constituency. The BJP bagged 36.28 per cent vote share while Congress received 35.11 per cent of the total vote.Later, the BJP stitched a coalition with the NPP, NPF, and LJP to form the government under the leadership of Biren Singh.In the 2019 Lok Sabha polls, out of two parliamentary seats in Manipur, the BJP and the NPF won one seat each. ANI